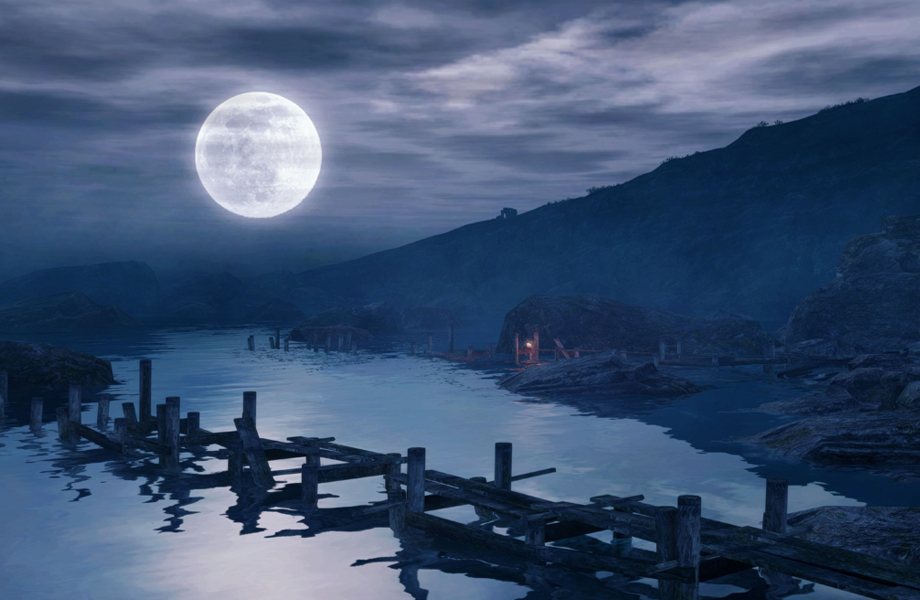 Dear Esther Live is an ambitious, real-time show that sees a video gamer play out a unique path to which live musicians respond with a haunting score, meaning no two visits to the game’s Hebridean island setting are the same. Mike Diver finds out more from the game studio’s Dan Pinchbeck and BAFTA-winning composer Jessica Curry.

Exploring the derelict buildings, forests and shimmering catacombs of a virtual island shrouded in mystery, in a live performance that blurs the boundaries between video game, ghost story and film screening. Sound good? We think so. It’ll certainly be different, at the very least. Guided through a deserted landscape, as fragmented memories of a fatal car crash and the island’s history converge, Dear Esther’s audience hover in a half-imagined world between life and death, before the story moves towards an emotional climax.

When award-winning developer The Chinese Room first created the ground-breaking video game, it replaced shocks and scares with wonder and discovery, elevating it to a piece of artwork. Now, inside Colston Hall, it will be taken one step further, becoming an affecting live experience that lingers in the minds of the audience, long after it’s over.

MD: I suppose the first question has to be the simplest, and the most pertinent: why take this show, this game, on the road?
Jessica Curry: It’s the fifth anniversary. So we did the ‘Landmark Edition’ for console (PlayStation 4 and Xbox One) in 2016, and we’d not really been thinking much about Dear Esther for the last couple of years. But going back into it, we were really nervous – was it going to stand the test of time? Would it not have aged particularly well? We all sat down with much trepidation to discuss this fifth anniversary edition, and we were so proud of it. I’d been invited to do a week in London with the British Council, and talking to really exciting people like HOME in Manchester and the British Film Institute, about sound and image, and about how you successfully marry them. I thought: hang on, we’re missing a trick here with Dear Esther, in terms of playing it live. It has so many advantages that way. The show is comprised of a string quartet, piano and singer, so that’s really manageable in terms of touring. It’s one actor, which is fantastic. And it’s such a beautiful game. The visuals are so rich and exciting, and the writing is so good. I had this light bulb moment: why isn’t this a thing? Let’s make it a thing.

Did you always feel that Dear Esther could be more than ‘just a game’?
JC: As creators, you’re always moving on. But what kept Dear Esther alive was the feedback we were getting from other people. We employ a young team at The Chinese Room, and they were coming back from Rezzed [London’s biggest games event] and saying: “Dear Esther’s been referenced in five of the 10 talks I’ve been to today.” It has had a life for other people, and for the industry, I think.
Dan Pinchbeck: It’s been amazing, seeing how far it’s filtered. People are writing PhDs on the game now. When we started working in games, we came at it with the sort of same approach that we’d come to other mediums we’d worked in – we wanted to tell stories through text and music. And it just seemed to be a really good fit. But the gap between our expectations for Esther, and what it’s become, they couldn’t be further apart. We’ve always been really proud of it but we would never, in a million years, have thought it’d have this kind of cultural impact. To see it now held up, and referenced endlessly, it’s extraordinary.

Would you say that the live experience isn’t explicitly for ‘gamers’? That, much like the game itself, it’s ticking more than that single box?
JC: I’m really passionate about expanding audiences, and that’s one of the reasons why I do my Classic FM show, High Score. There’s a whole world of people who don’t know about the extraordinary panoply, and rich and diverse world, of video game music. And I want people to be able to experience that. Not to show them something, to say: see, I told you it was good. But to gently say: you’ve probably never heard this before. And I think it’ll be similar with Dear Esther Live. One of the things the Barbican were especially pleased with, when we had the show there, was the percentage of people coming that represented a new audience for them. I think it was 64%. They’d never stepped through those doors before, but they found something that they felt really comfortable going to. These can be intimidating spaces. It’s like an art gallery – if you’ve never been to one before, you sort of imagine what it’s going to be, and that it’s not for you. 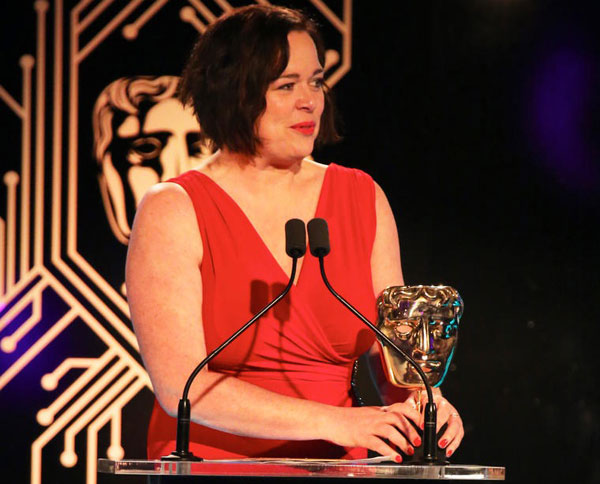 Jessica won a BAFTA for her gaming music.

What were your nerves like before the first show, at the Barbican?
JC: There’s nothing as nerve racking as live. That instant feedback when something goes wrong – you’re there, the audience is there.
DP: You can’t patch a performance halfway through if you discover something’s gone wrong.
JC: The tech was the biggest worry on the night. We had world-class players and singers, so they weren’t going to go wrong. We were only wary of: is the computer going to blow up halfway through?
DP: There’s quite an elaborate backup plan with two PCs running the game simultaneously, with feed going out to six monitors from each. We’ve adapted the game now to dump in a whole load of invisible walls, but at the first Barbican performance there was a point where I was controlling the camera and walking very slowly backwards, and Jess was sat there in the audience going: “cliff edge, cliff edge”! There are now things in place to prevent an accidental tumble to your death halfway through the show.
JC: That was enormously stressful. What we’re going to make more of on this tour is that not everyone realised that it was actually being played live.
DP: That gives the show a special edge. The music is so haunting and so immersive. There was a point in the second concert, at the London Games Festival, where the conductor just hung a little longer on the last note, and being able to stop and let that play out before the camera moved again, you couldn’t do that with something like a live soundtrack to a film – you’ve got to be constantly driven by the visuals. But to have the visuals respond to the music is really exciting.

What’s the preparation been like for the live show?
JC: The most beautiful thing, for me, is that the players on this tour played on the original soundtrack, so there’s a direct relationship there – they were there five years ago. There was a frenetic day at the Barbican, the day before the show. I look back now and if I’d have known how much work was needed to get the show up and running, I might’ve had second thoughts about it. Obviously we had to do a special build of the game that contained the triggers for the conductor and the actor, and the musicians are triggered by the conductor. That was a hell of a lot of work. And the cabling! The Barbican is world class, and it gets every kind of show in. I said to the producer there on the day of the rehearsal, “You must have had far more complicated shows in than this.” And she said: “Well actually, not really…”
DP: There must have been three miles of cables on that stage. It was coiled everywhere. It really brought home how much this is a live performance – it’s not just playing along to a soundtrack. 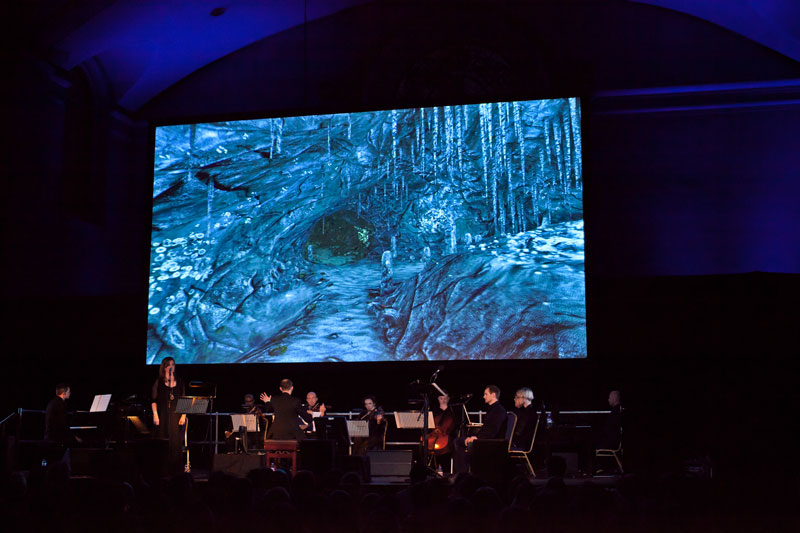 Audiences will watch the live gaming journey as a narrator and live musicians react to what unfolds on screen.

Have you found that people have come to some of your games because of their music? Given how Rapture’s soundtrack won a BAFTA.
JC: Definitely. We hear from people who tell us they’ve never played one of our games, but they have all of the soundtracks.
DP: We get quite a lot of mail from much older people. We heard from one person in their 90s. Often, people will play the soundtrack to their parents, and that’s a way into it for them. It helps them understand that games are not just all shooting and killing. Gaming is a shared language. A lot of people are yet to realise that games can engage you emotionally. When you’re using music as a route in, that’s a great way of showing that there is something you can relate to. It breaks down that barrier.
JC: What I wanted for Rapture was this message of love and hope, and that we only have each other. I actually get contacted by people asking to use the music at their weddings. And, of course, they can.

How do you feel about anyone using the music from your games in a new context?
JC: A piece from Rapture was used on Top Gear, for a rocket launch in Kazakhstan. And it was brilliant. It was great to see it recontextualised. We were just sat there giggling, because the Rapture music is so filmic, and the music supervisor from Top Gear loves it. So I personally like it when it gets reused, because it gives it a new life, and brings it to new people. I’m not too precious about it. Get it out there.

Do you feel there’s still some snobbery about game music, versus that found in film and TV?
JC: It’s really variable. Some places like the Barbican and Classic FM are welcoming games music with open arms, realising that it’s bringing in new audiences. They’re genuinely enthusiastic about the music that’s being played. But I think there’s still snobbery about games. This has been an ongoing conversation with BASCA, who run the Ivor Novello Awards, and the British Composer Awards – there’s no category at either of those for games music. And they are very anti-games music. So are the Proms. When we were nominated for 10 BAFTAs for Rapture, I got in touch with Front Row on Radio 4, thinking they’d be excited that a British company had achieved this; but they just said, “it’s games,” and they weren’t interested. But I think it’s changing. The groundswell of influential people, like the London Symphony Orchestra, one of the top orchestras in the world, they’re recording games music and playing it live. And that sheer weight will bring the last detractors around into the 21st century.