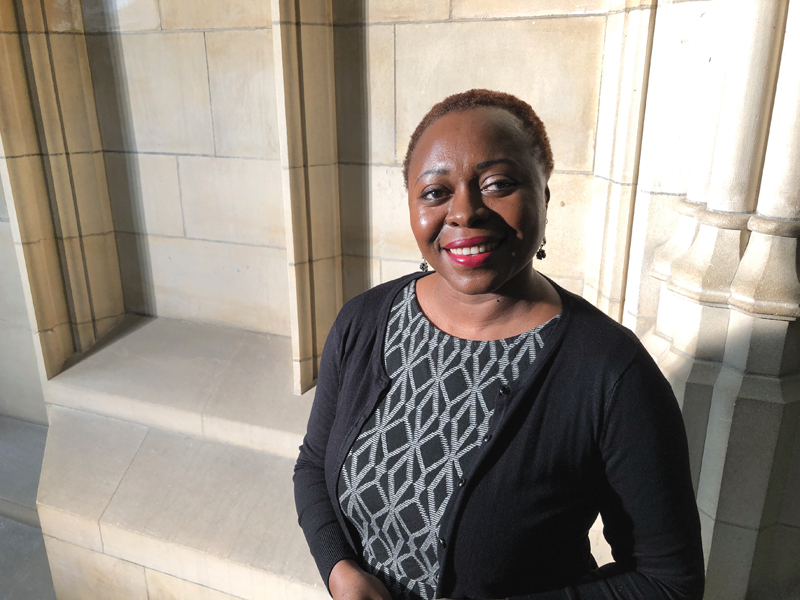 Yesterday, Olivette Otele, the UK’s first black female professor of history, was appointed as Independent Chair for Bristol’s Commission on Race Equality. We look back at our interview with Olivette at the beginning of the year as she began her position as the University of Bristol’s first professor of the history of slavery. Words by Jessica Hope

Busy would be an understatement when talking about Professor Olivette Otele’s life in the last 12 months. Since the academic was announced as the UK’s first black female professor of history during her tenure at Bath Spa University in late 2018, she has been in demand across the world, delivering talks and research papers, as well as teaching and attending events on an almost constant basis.

Recognised for her world-class research on transnational and European colonial and post-colonial history, Otele now begins 2020 with a fresh challenge as she takes up a position at the University of Bristol as the institution’s first professor of the history of slavery.

In this new role, Otele will work with staff, students and communities in Bristol to help the university and the city learn more about its past and its connections with slavery. To begin with, she will undertake a two-year research project. “I will be looking at the role the university played in the history of enslavement, and in particular how some of the founding members had families that had made their fortunes through the transatlantic slave trade, and how this money was used to support the university,” says Otele.

“It’s not a direct link as such – the university was founded in 1909, so long after the abolition of slavery in 1807 and The Slavery Abolition Act in 1833 – but it’s about the money trail from the enslavement of people and how that money was then used to support the university through donations.

“I will be looking at how this collides with stories in the 21st century in terms of what each institution in the city is doing to address racial discrimination, social issues and poverty. In terms of a city, Bristol is really socially divided, which is surprising as it’s a multicultural city.”

Otele hopes that she can include contributions from the wider public in her research to help shed light on the university’s connections with people who once lived and worked in the city. “I’m hoping that this will show another episode of the history of the city, but this time bringing it together. I’m really excited about it; it’s a huge amount of responsibility,” she says.

Lately, Bristol has been addressing the city’s connections with slavery, such as the proposal to change the name of the Colston Hall once it reopens following its refurbishment, and the debate around adding a second plaque to the statue of Bristol-born slave trader Edward Colston in the city centre. Otele’s recent appointment is another step in the right direction towards making this a city which will not hide its links to historic atrocities.

Talking about the debate around removing the Colston statue, Otele says; “20 years ago the idea of removing a statue was completely mad, and yet they [the Bristol authorities] have had this conversation before the recent Oxford and Cambridge statue debates. They came up with the idea of a plaque, which may not satisfy everybody, but I am sure that Bristol will find a way to compromise.”

Change within the university

Despite changes happening around the city in recent years, should the University of Bristol have appointed a professor of the history of slavery sooner? “Yes!” exclaims Otele, “It didn’t have to be me, but they should have done it before. But, then again, Bristol will decide to do things when it’s the right time to do it. They had a big push from students and communities to make this [her new position] happen as well. It was the university’s decision, but there have been debates nationally about representation and people from African descent in important positions that matter to them.

“Diversity isn’t just having a black person here and there. It’s about where they can have some kind of influence and power, and have a say in how things should run.

“The students wanted someone of African descent to teach this area of history, because of this idea of role models. You don’t find many black people in academia in history, and the students are worried about that.

“It’s not just black, ethnic minority students who are pushing for this, it’s all kind of students and people.”

Otele, who was born in Cameroon before moving to Paris as a child, first became interested in history during visits, back in Cameroon, to her grandmother who would sit her by the fire and recall stories from the past, many of which were about the country being under British, French and German rule. “She would tell us these stories, many of them very scary. But it was the reality of her life, growing up in Cameroon and going through different regimes,” says Otele.

After completing her BA in literature and history at the prestigious Sorbonne University in Paris in 1998, Otele studied history for her MA and PhD – a decision that came from, as she describes, “this urge related to social justice. I wanted to understand the root of racism and discrimination – this idea of hating someone for something they are not responsible for, something that is incredibly random.”

Otele wanted to deepen her knowledge of colonial history and the domination of the British and French empires on the world in past centuries, but knew that this would be a difficult subject to explore. “This is horrible history. It really shows the extent of human wickedness, greed and violence. When I was doing my PhD, it was probably the most difficult time because I would be in the archives reading examples of torture being greatly described. But it also taught me a lot about survival.”

The rise of Olivette Otele

It is this notion of perseverance that Otele has had to champion throughout her studies and career. After six years of commuting between Paris and Newport, Wales (where her family live) for her PhD and work, as well as juggling a job as a teaching fellow at Bath Spa University, she secured a full-time position as a senior lecturer in Bath in 2013. Then, in the same year that she became the UK’s first female black professor of history, Otele was named in the BBC’s 100 Women 2018 list of inspiring and influential women from around the world.

Otele’s academic work has also received significant international recognition. Since 2007 she has been considered an expert by the French government on the concept of how memory, politics and slavery intertwine, and her PhD became compulsory reading for trainee teachers in France as part of their examination process. She has also been instrumental in securing vast sums of money for projects such as SLAFNET, which looks into slavery in Africa and the connections between European and African communities, and she has also researched how Afro-Caribbean and African communities have settled in Wales in the 21st century.

As she begins her new role at the University of Bristol this month, and over coming years, you can expect to see Otele appearing around the city more as she plans to hold more public events on her research. “I’m hoping that when I have more information – anything newsworthy and substantial enough – that I would like to share it and that people can come along so they are involved in the process. That way I can be completely transparent with what I’ve found, and ask people what they think about it and what we should do about it.”

Otele’s research will arguably reveal more difficult details of the city’s and the university’s connections with the slave trade, but by highlighting these connections, she is helping to keep this city’s conversation going, rather than hide from its past.