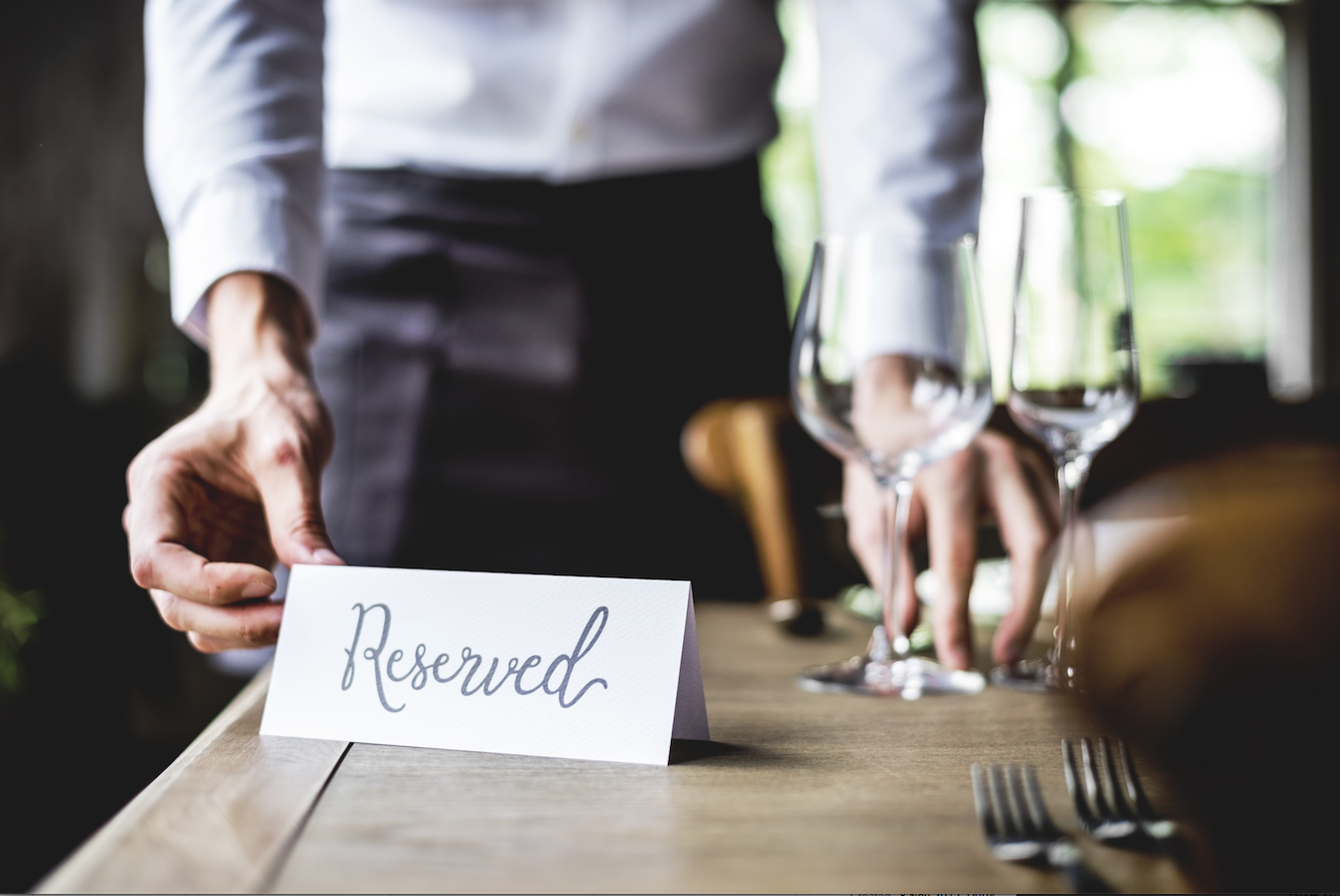 Restaurant no-shows are up there with the worst offenders in dining etiquette. Melissa Blease reports

The date was set three weeks ago: dinner this evening, at a friend’s house. Your place at the table in somebody’s home awaits you, and that somebody has been preparing for the event for days – not least of all on the day itself, when the last of the ingredients have been brought, the prep is fully underway and the scene is carefully set. Unless you’re the unfortunate victim of a dire emergency, you wouldn’t just not turn up, would you? Of course you wouldn’t! And yet, countless people believe that, when the situation isn’t quite so personal, it’s okay to do just that, giving little thought to the effect that their inconsiderate behaviour has on many small, independent businesses.

“Our restaurant has 41 seats at capacity and, like all small restaurants, our profit margins are thin: we make approximately 40% of our weekly take at the weekend, when people mainly book online or over the phone,” Steve Gale, of Cheltenham Road’s Flour and Ash, told us.

“One evening recently, we were fully booked, but come 8pm we were half empty because a large table cancelled their booking 10 minutes before they were due to arrive, and two other tables simply didn’t show up. We were suddenly 34% of our capacity down – I doubt we scraped anywhere near any kind of profit that night.

“We call round on the day to try and reconfirm tables that have been booked, but we don’t ask for a deposit as many people simply don’t want to pay a deposit on behalf of a crowd – would you put your credit card down for five other people and then have to fork out, say, £120 that you’d have to claim back from them if they cancelled on you? Probably not.”

Ben Porter, general manager at recent opening Wellbourne in Clifton, has experienced similar difficulty. “The problem of no-shows has a major effect on our business as we’re only a small restaurant with just 25 covers,” he said. “We’ve had large parties book and then not show up, representing the loss of a quarter of our revenue for the whole evening. We work on a turn-table basis as well, so if a table is reserved for diners who don’t arrive, we would have more than likely turned away guests who could have taken that table. We don’t really want to start taking deposits for larger groups as we’re a very neighbourhood-friendly restaurant, but we have started ringing larger parties 48 hours prior to their reservation to confirm, which is working well. Then, if they do have to cancel, it gives us time to fill the space.”

Cousins Ben Harvey and Dominic Borel, at Pasta Loco in Cotham, are also reluctant to demand cash upfront, but they have started to think of measures to combat the issue. “We don’t take a deposit or card details as we like to be a little more approachable than that, and we’d like to maintain our reputation as relaxed restaurant,” they agreed.

“Having said that, it’s really frustrating to have to turn people away then suddenly find that we’ve got space due to no-shows. The people who think its okay to not let us know when they can’t make their reservation are lazy and disrespectful. We’re currently part of a WhatsApp group with about 30 other restaurant owners, discussing what action is best to take on this, but at the moment, we ban no-shows from making any future bookings. We’re trying to get ResDiary – our online booking system – to set up a linked, city-wide banning group, so if we block someone on the platform for failing to turn up, they’ll be blocked from other participating restaurants too.”

“Indeed, there are several savvy eateries in Bristol who use Twitter very effectively in the case of a no-show; that’s when their social media feeds spring into life…”

However, The Cauldron’s executive chef Henry Eldon, based in St Werburgh’s, has decided that a deposit is simply a necessary evil. “We’ve struggled with a varying level of no-shows, as well as last-minute cancellations and table numbers significantly dropping on the evening of the booking.

“In the past, we’ve had 40% of reservations, for what we believed to be a fully booked Sunday roast sitting, not turn up, which has led to an obvious loss in turnover and, on some evenings, profit. We’ve therefore taken the step of charging a deposit of £5 per person at the time of booking, via card payment over the phone, for tables of six or more covers, and every table on our Sunday roast service. While this has eliminated most of our issues, it does take time and is a bit of an issue when people don’t have their card details to hand. But I’m working on an app and online portal called Nuggets – a revolutionary app that will allow Bristol restaurants to streamline the deposit holding process.

“We’re working on integrating this app with all major booking services, but it’ll also be able to run independently as an instant, secure and fully-customisable deposit holding system. It is now in its beta testing and we’re looking for restaurants to partner up with for trials.”

Several other restaurateurs, meanwhile, firmly believe that booking no-showers are baddies committing a “crime” for which they should be forced to pay. Wilks charge a last-minute no-show/cancellation fee of £25pp, while Casamia have taken their no-show policy even further than that by introducing a non-refundable, ticket-only system for diners wishing to sample their tasting menu, paid for in advance – well, if we’re booking theatre or concert tickets, paying for hotel accommodation, or buying anything online, we’re expected to pay in advance, aren’t we? Those in support of the Casamia policy believe that the only people who aren’t comfortable with it are those who are hedging their bets: making various reservations for the same night and then seeing how they feel when the date comes around.

“I genuinely believe that there’s a growing group of diners who book several restaurants for one particular evening then decide on their final destination when the time comes,” says Steve Gale – and several restaurateurs I spoke to while researching this feature wholeheartedly agree, with one (who understandably chose to remain anonymous) even suggesting that a fellow restaurant owner has made fake bookings in order “to sabotage the success of the business next door.” While that kind of dastardly behaviour can never be proved, bet-hedging does seem to have become a bit of a trend – and it’s a global one, too.

“Naming and shaming online seems a bit harsh, but I do think restaurants should be sharing their no-show names with each other to find those repeat offenders…”

Last month, online Australian booking site Dimmi made headlines when it put nearly 40,000 diners on a no-shows blacklist, having discovered that many users were making multiple bookings for the same date under different pseudonyms. Dimmi has seen a 25% drop in their clients’ no-shows since adopting the policy and as a result, other online restaurant reservation services such as OpenTable are expected to follow suit; as our social lives become increasingly app and online-led, this most recent development will no doubt encourage a sigh of partial relief in restaurant world.

But how do we, the (hopefully well-mannered) restaurant customers view the situation? Bristol food blogger Charlie Harding finds the whole situation abominable. “We can educate the public until we’re red in the face about why no-shows are more than just an inconvenience, but the sort of people that do this couldn’t care less – they’re the sort that sit on their own on the outside aisle of the train or bus pretending they can’t see it’s packed. But sadly, we aren’t about to be blessed with a society of polite and courteous people and the answer to how to prevent the worst of them wasting everyone’s time and money isn’t an easy one.

“Naming and shaming online seems a bit harsh, but I do think restaurants should be sharing their no-show names with each other to find those repeat offenders and have them blacklisted. Deposits would help but honestly, they do put me off booking into places. The Ox has started taking card numbers to charge a fee in the event of a no-show, though, and I’m happy to do that. In Bristol, most of the restaurants I know and love are great with letting people know if there is a spare table free via Twitter and I think they get snapped up.”

Indeed, there are several savvy eateries in Bristol who use Twitter very effectively in the case of a no-show; that’s when their social media feeds spring into life. So, there’s a top tip at the end of the rather grim little tunnel we’re exploring: if hungry foodies use their Twitter accounts wisely, they could bag themselves some of the best seats in town and do a restaurant a big favour. But of course, not everybody has a Twitter account – and not every restaurateur, manager or staff member has the time available to maintain one at peak times.

If every restaurant customer maintained a sincere level of respect for the hardworking business folk who make dining out such a pleasurable activity, such businesses wouldn’t be facing such a crisis. But as we’ve found, it’s a sad truth that many think it’s okay to reserve a table at a lovely, popular independent restaurant and then not turn up when the date and time arrives.

Booking no-shows? We say “No way.”