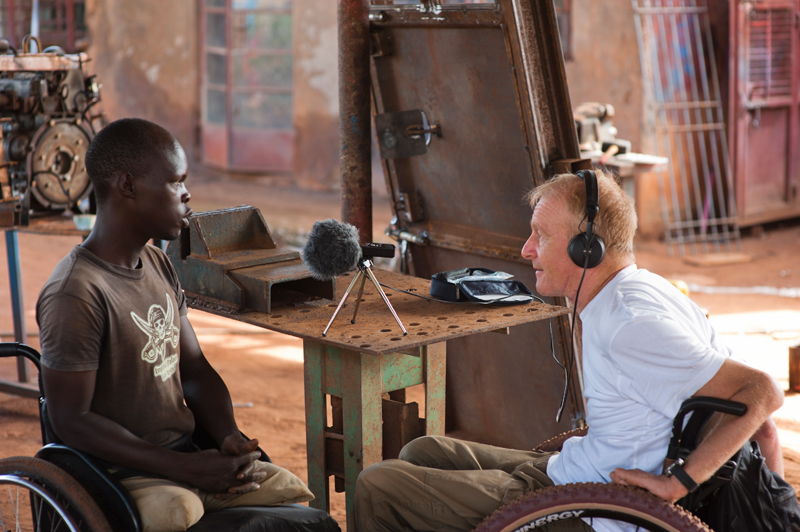 David Constantine was recognised in The Shaw Trust’s annual Disability Power List 100 – featuring the most noteworthy disabled people in the UK – for dedicating his professional life to empowering disabled people in developing countries. For nearly 30 years, his charity and social enterprise, Motivation, has provided low-cost wheelchairs and development programmes to over 100 countries, changing the lives of thousands of people by enabling them to attend school and workplaces and get around in their communities.

David is an influential advocate for disabled people, advising on global health, political initiatives and international provision of assistive technology. He was awarded an MBE in 2010, adding to his numerous honorary degrees and academic awards, and was appointed a Deputy Lieutenant for the County and City of Bristol in 2014. In 2016, Motivation’s Rough Terrain wheelchair – an evolution of David’s first-ever wheelchair design – was also honoured in the London Design Museum’s permanent exhibition as an iconic design.

TBM: How did the creation of the Rough Terrain chair come about?
David: I was studying agriculture and farming and went out to Australia while I was doing my course. When I dived into a pool that was too shallow it resulted in a spinal cord injury, which meant I was paralysed from the shoulders down. So my life took a bit of a turn at 21. When I left the hospital, back in the UK, I had to decide what I was going to do. I thought I could start looking into personal computers. They were new at the time, so I ended up doing a course in computing and accountancy at Oxford Polytechnic. That led on to a job at IBM, then an interest in product design – from there I applied to do a masters degree at the Royal College of Art in computer-related design. While studying, the design department had to enter a competition and the subject that year happened to be wheelchair design for developing countries. It had never crossed my mind before then that there would be different needs for a wheelchair in low-income environments. I teamed up with a fellow student – Simon Gue – and we combined my experience as a wheelchair user with his knowledge of travel and workshops. We won first prize. That was the root of the design that started Motivation and how we began to try to address the needs of disabled people.

How did it feel for it to be exhibited in the London Design Museum?
It was a very proud moment. I’d had something of an epiphany about how product design can be limiting for disabled people. It was design that started Motivation and that has been a core thread through our work over the last nearly 30 years. So to end up with a product in the Design Museum was quite a watershed moment. Our aim has been to put together not just a ‘make-do’ product based on a ‘something is better than nothing’ approach – we are about making products that are low-cost, repairable in the countries they will be used in, suitable for the terrain, the environment and the user, and with an aesthetic that makes people feel they want to use the product, not just that they have to use it.

What’s the most memorable story that has come through your work?
Somebody who sticks out in my mind is Mohammedullah, who lives in Kabul. He’s a paraplegic with a spinal cord injury. He received a Motivation wheelchair from the International Committee of the Red Cross in Afghanistan. He also started using a Motivation tricycle attachment so he could hand cycle across the city among the traffic from his home to the orthopaedic centre. With better mobility he could earn an income with his own business, selling spare car parts. In many ways that is the ultimate aim of Motivation’s work – to help someone become mobile and ensure they are seated well and confident in getting around in the right piece of equipment for their lifestyle, without the risk of further health complications so they can create an income and be independent. More recently the ICRC has been running wheelchair basketball training sessions, using Motivation Multisport sports wheelchairs. They created a team which tours internationally and Mohammedullah got good enough to play. It was through wheelchair basketball that he came to finally feel he had something in his life that he was really motivated by. That journey from being paralysed, to becoming mobile, to being able to create an income – that wasn’t quite enough. By playing a sport he felt like a member of a community. Life was worthwhile. I learnt something from that story. Our aim is to support people to become self-sufficient, but there are other things that ensure people can fulfil their potential. That’s why Motivation has designed the right kind of products to enable that.

What do you love about Bristol?
Having the docks going through the heart of the city creates a really different atmosphere because you can drive, walk or cycle through it and at some point you’re going to see water. It gives you a different sense of space, light and activity and references the city’s historical past. It’s somewhere you can spend leisure time – just sitting by the docks at the various cafes and restaurants, or actually on the water. That’s quite unusual for a city centre.

Which venues deserve a shout-out for accessibility?
People don’t realise that the Arnolfini was closed – quite a few years ago – because it was totally inaccessible. I remember it in the late ’80s when there were stairs all over the place. Then they got a grant and closed for some time. When it re-opened it was quite ahead of its time. It was made fully accessible thanks to an architect who was a wheelchair user – Andrew Walker. I knew Andrew from being rehabilitated with him in hospital so I’d followed his path. When I went in to see the results of his work, it was quite amazing. He made sure that it was completely flat throughout. Now, it’s so seamless that people don’t even notice – which is exactly as it should be.

Tell us about the Flying Start chair and the Olympics
It’s actually our 10th anniversary of producing sports wheelchairs – we started in 2009 as a result of a request from the International Paralympic Committee. They recognised that at the time there was a limit on how many countries could participate in the Paralympics, simply because to access sports you need to have the right equipment. If you don’t have access to decent equipment, because it is very expensive, you’re always going to be held back. They wanted to enable people to start playing at a grassroots level, in a low-cost product suitable for the game. To create opportunities for people to start, then get better so they can play at an international level. They asked us to design a range of wheelchairs that could be used for sports development. On the back of the success of our tennis and basketball wheelchairs, they asked for a racing wheelchair for athletics to be launched at the London 2012 Olympics. It’s not a high-level competition wheelchair for Paralympic use, but it allows people to get used to the feeling of racing. It has all the features of a racing wheelchair that gives even more people access to the sport. They’re used across the world now as an entry-level and even sports clubs that train para-athletes like Hannah Cockcroft will use the Flying Start to introduce disabled people to wheelchair racing.

What motivates you each day?
The knowledge that our work is never quite finished. There are plenty of people out in the world who haven’t had the opportunities that I’ve had. I’ve been brought up and rehabilitated in the UK with access to great facilities – which aren’t perfect, that’s true. But over the past 30 years, I’ve gained experience of seeing, first-hand, the kind of treatment, environment and conditions that disabled people face in a developing country. It’s very, very different from the experience here. That motivates me to do more with my work.

You’ve achieved so much; what ambitions do you have now?
I’m really excited about the Motivation InnovATe project – we’re looking at how we can change the system of wheelchair provision in low-income countries to make it more streamlined and flexible. We’re testing a new way of locally producing bespoke wheelchairs, with clinical and design-led thinking. We are combining a new way of assessing wheelchair needs, then using 3D printing to make made-to-measure products that suit the body, lifestyle and needs of the user. We’re just finishing up the first trial of the project with a team of technicians and wheelchair users in Kenya. I’m excited about the potential of the project and how it could help countries to make their own wheelchairs so they become less reliant on cheap imports that have a ‘one size fits all’ approach.

Which disabled figures really inspire you at the moment?
Earlier this year I met a young boy quite randomly on the train back from London who is a wheelchair user: Jonathan Bryan. He has just written a book called Eye Can Speak. He is non-verbal and he uses a communication tool to communicate with his family and carer. I looked at him and I thought that the challenges he faces are quite unbelievable. And yet he’s a real voice – he’s on Twitter and he’s written this book, which has been acknowledged with an award. I was inspired by just meeting him for an hour on the train. It was quite incredible.

Which of Bristol’s unsung heroes deserve a mention in your view?
Karen Lloyd is running an organisation called Active Ageing that is trying to get people to be active – or remain active – in older age; to help them keep moving and get outside their homes, so they don’t become lonely or immobile because of a lack of exercise or fitness. People like Karen who run these groups quietly in the background are really important.

What has your work meant to you in understanding your own disability?
In some countries where Motivation works, the life expectancy of someone with a spinal cord injury is just 18 months. So I’ve started to realise how lucky I am. I’ve been able to survive what some might consider to be a devastating injury; to live an active and healthy life with something meaningful to do. I’ve had to fight for the odd thing or two in life, but in general, I’m accepted in this society. And that’s thanks to a whole lot of people in the 1950s, ’60s and ’70s who fought very hard to get disabled people recognised as useful members of society.

Is there anything you turn to when you need a mental pick-me-up?
About four or five years ago I started painting watercolours. I did it to slow myself down a bit, to make myself stop and really consider things. I had no idea what an amazing thing it was to just spend a few hours sitting and really observing, focusing in on something that is all-consuming in front of you on a piece of paper. I started paddleboarding this year and I’d like to do more of that. I sit on the board with a special seat; it’s my aim to get a bit more active so I’m not just sitting behind a desk all day. I haven’t done sport for years so this is a way to do that, get back on the water, and enjoy the Bristol docks.