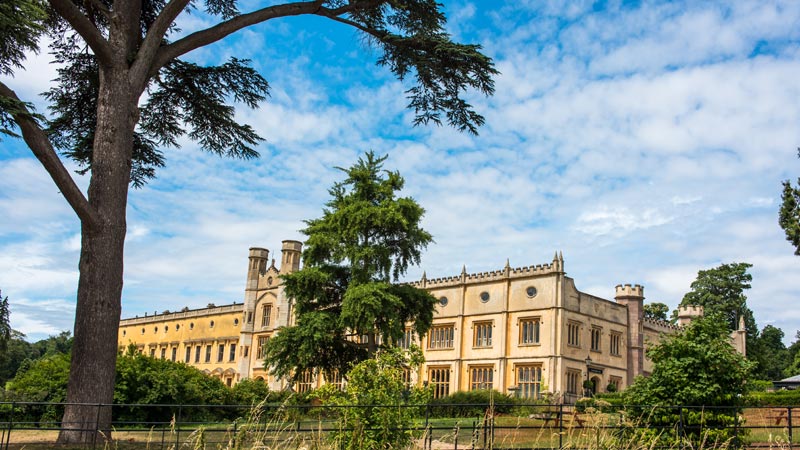 Bristolians know Ashton Court for its acres of rolling countryside, paths and bike trails – perfect for a Sunday stroll, picnics and, of course, the famous festivals. Just two miles outside of the city centre, it straddles two boundaries – North Somerset and Bristol – and the seven miles of high walls and majestic gatehouses that surround the land still lend an air of mystery to what lies beyond.

Probably relatively few Bristolians have explored inside this quirky mansion. The Grade I property is, both inside and outside, an architectural puzzle. Centuries of development have seen the house rebuilt, partly demolished, clad, added to and re-invented. Past architects such as Benjamin Ferry and Charles E Davis have often simply grafted parts on for the incumbent owner. As a result, the Court lends itself to secret passageways, hidden rooms and a labyrinthine appearance.

The original manor house can be traced to the sixth century; the current Great Hall is said to match the exact dimensions of the Saxon Hall. The manor may be even older than this however, for in one doorway is part of a Roman mosaic, presumably from a villa that stood on this very site.

Long Ashton Estate and the manor are mentioned in the Domesday Book of 1086. The settlement of Estune, as it was known, was shared between three landowners, the chief of which was Bishop Geoffrey of Coutances. By the 13th century the manor had been acquired by another Norman, Thomas de Lyon, who rebuilt the property in 1290. In 1392 the Lyons were granted a royal licence to enclose their lands and create a deer park, which still exists to this day.

Ashton Court passed through a number of nobles’ hands before being sold in 1545 to John Smyth, a Bristol merchant who exported wheat, cloth, leather and lead to Spain and France and imported slaves, sugar and tobacco. He twice became lord mayor of Bristol.

Despite owning the vast Ashton estate, John preferred to remain at his Small Street property. The survival of Smyth’s ships ledger from the 16th century, as well as family letters from the preceeding centuries, gives us a rare picture of one of the important English aristocratic families over a number of centuries.

For 400 years the Smyth family held onto the estate through marriages and manoeuvring, despite the direct bloodline running out three times. A useful caveat to the estate deeds was that the heir must take on the name Smyth if he didn’t already have the name. The final inhabitant of Ashton Court, Esme Smyth (1863-1946) was christened Esme Edwards, the illegitimate child of Sir Greville (1836-1901) and Lady Emily (1835-1914) while Emily was married to her first husband. On becoming heir, Esme promptly changed her name to Smyth, much to the chagrin of her husband Gilbert Irby.

The Smyth family wealth came not only from enterprise and the purchase of land, in this country and abroad; but also from careful marriage arrangements. By the time of Sir Greville’s majority in 1857, the annual income from the estate was £27,000 (over £1.5million today).

It cannot be ignored that the Smyth family’s wealth, as with many rich families of the 18th and 19th centuries, came from the exploitation and suffering of others. The marriage in 1757 of Sir John Hugh Smyth (1734-1802) to Elizabeth Woolnough (1742-1825) brought a vast dowry including Spring Plantation in Jamaica. In 1748 Jarritt Smyth (1692-1783) opened up a series of coal mines in Bedminster and North Somerset, for which eight pence (around £4 today) from every ton of coal mined by local men and boys went into the Smyth’s coffers.

As with many great houses, Ashton Court was no exception to visits by royalty over the centuries, but it was an inauspicious start. Sir Hugh had such a reputation for cruel and unreasonable behaviour towards his servants and tenants that the opportunity to host Queen Elizabeth I on her visit to Bristol in 1574 passed him by.

In the early 17th century the Smyths did, however, entertain Queen Anne of Denmark on her visit to the city and in 1663 a gift by Sir Hugh (1632-1680) to King Charles II and his queen, who were partaking of the waters in nearby Bath, led to the king riding over to the estate to thank him in person.

Sometimes royal relations were closer than expected. In the 1840s the Prince of Wales, future King Edward VII, would visit Ashton Court for the shooting. There was a rumour that it wasn’t just pheasant that the Prince was bagging in Sir Greville and Lady Emily’s home, however this has never been substantiated.

Most of the interior of Ashton Court was sold off in the 1947 Great Sale, so it needs imagination to envisage its glory days. Sir Greville had converted the stable block into his own private museum with his souvenirs and animals of his travels, with a bungalow built on the estate to house the overflow (now the Redwood Hotel and Country Club). It was Sir Greville’s vast collection, including rare, extinct auk eggs, that was donated in 1910 by his widow to Bristol Museum. Alas the bombings of 1941 destroyed most of it.

The family’s passion for the countryside, and the size of their estate, made the Smyth’s the perfect hosts of the West of England agricultural shows. In 1936 Ashton Court was chosen to be the site of The Royal Agricultural Show which was attended by the then Duke and Duchess of York, the future King George VI and Queen Elizabeth.

Despite such conspicuous displays of wealth there is still rumour that treasure is buried upon the Ashton Court Estate. Apparently, at the beginning of the English Civil War, Thomas Smyth (1609-1642) requested his steward to bury the family silver on the estate. Both Thomas and the steward died before the location of this treasure could be disclosed and no silver has ever been found. The hunt for family wealth continued in the early 20th century when Esme Smyth (1863-1946) desecrated the family vault at Ashton Church, prising open her ancestors’ coffins in the hope of finding a valuable bejewelled gold ring.

As befits any English aristocratic family, eccentrics abounded in the Smyths. Sir John Hugh’s wife Elizabeth revelled in gambling and hunting and took a perverse delight in doing the exact opposite of what her physician advised. Sir John (1659-1726) was considered a dull man and a hypochondriac – his daughters referred to Ashton Court as “the nunnery”. Another eccentric was the insolent and badly behaved Sir Hugh (1792-1824). He played practical jokes such as dropping a fake stag beetle down the bodice of his organist Miss Emmins.

One of the most scandalous court cases that rocked Victorian England, and was said to have been the inspiration for Charles Dickens’ Jarndyce v Jarndyce court case in his novel Bleak House (1852-3), was that of Smyth vs Smyth (1853).

On the death of Sir Hugh and his brother Sir John (1776-1849) the estate passed to Greville Upton (later Smyth), a great nephew of Hugh and John. Greville was a minor so the estate was put under stewardship.

In 1852 two men arrived at Ashton Court, one a solicitor and the other a man who claimed he was the rightful heir, Sir Richard Smyth – an illegitimate son of Sir Hugh. This impertinent imposter greeted the steward, Arthur Way, with the words: “I wish you to discharge the household…and I request you will hand me the keys to the mansion. But you need not hurry sir, I will allow you two hours to take your departure.”

The two men found themselves promptly manhandled out of the house by the servants, but ‘Sir Richard’ was not deterred. He set up home not far from Ashton Court at St Vincent’s Priory in Clifton and proceeded to approach tenants of the estate, instructing them to pay him the rates and not Greville.

In August 1853 the case of Smyth vs Smyth came to Gloucester Assizes. The courtroom was packed and under cross-questioning, Sir Richard’s case crumbled as he was revealed to be none other than a horse thief called Thomas Provis. Even after his unmasking, Provis still insisted he was a Smyth, declaring that he had the family trait of a pigtail to prove it. This wig was unceremoniously plucked from his head as he was taken away, and said to have taken pride of place in Sir Greville’s museum.

Ashton Court was never quite the same family home after the First and Second World Wars. In 1917 Esme gave the estate over to the Red Cross with £1,200 to help convert it to a hospital for convalescent officers, one of whom was the writer C.S Lewis. Post-1918 the building continued as a hospital and once the last patient was gone the Ministry of Pensions resided there until 1923.

During the Second World War, Esme chose to remain on the estate despite the risk and kept a loaded revolver on her work table as a precaution. Ashton Court was first a transit camp for troops from the Midlands on their way to France. The heavily wooded estate offered perfect camouflage for military vehicles and equipment prior to the D-Day invasions of 1944. As Ashton Court was on the flight path to Filton aerodrome, barrage balloons were put up and a gun was positioned in the grounds. As the bombs fell on Bristol, Esme enjoyed hosting the American GIs who were stationed at the Court and arranged weekly dances in the Long Gallery to which she would be wheeled along so she could watch.

The final days of the Court as the Smyth family home were sad ones. The building was already falling into wrack and ruin, and Esme became a Miss Havisham type of figure. She saw out her final days in an ever-shrinking series of rooms with just a skeleton staff and her pampered pooches for company. Her daughter and heir Sylvia (1901-1959) had by this point been disowned over disagreements over the running of the estate.

After Esme’s death in 1946, the huge death duties and spiralling maintenance costs forced Sylvia’s son and Ashton Court’s heir Greville Adrian to sell it. Luckily for Bristol it wasn’t demolished as so many country houses were at that time, but purchased by Bristol City Council in 1959.

Today Ashton Court is a Grade I listed property of national importance, within a Grade II listed historic park and gardens. However, with English Heritage recognising it as being in “slow decay” and its closure as an events venue, its future hangs in the balance…

Previous
Being Brunel: The Man, The Myth, The Legend