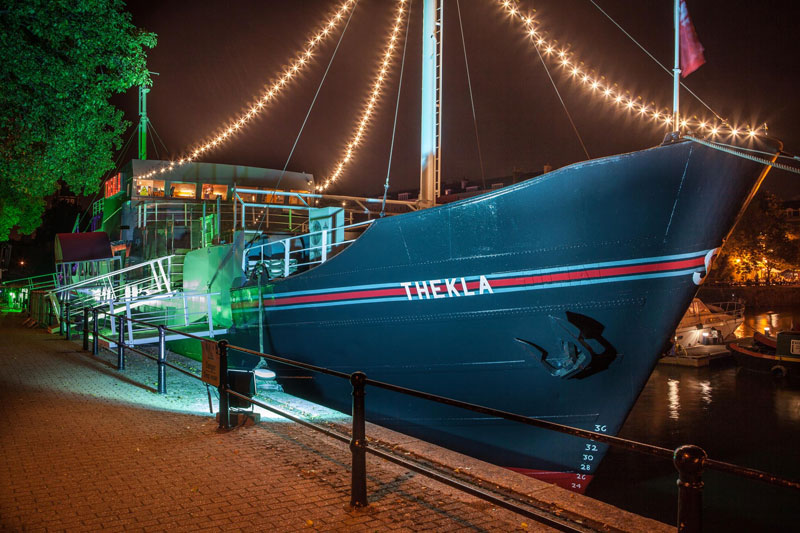 As the rising tide of development threatens more than one legendary local music mainstay, Jenny Hayes explores the issues facing Bristol’s independent venues and their importance to our city.

Bristol is the rebel city of the UK. Embedded within the rolling hills of the West Country, it’s a place teeming with culture, creativity and spirit. Nowhere is this more apparent than in the rich and diverse music scene, which over the last 40 years has given rise to internationally acclaimed artists that range from Massive Attack, Portishead and Tricky in the 1990s, through to artists like George Ezra, The Fauns and Idles in more recent years and up to today.

Instrumental to this success are the city’s grassroots music venues. These are the places that give local artists their first break – providing them with a supportive space to experiment, a platform on which to perform, and an opportunity to build their fan base. From these small venues, our unique music scene has grown and flourished, bringing deserved fame to the city, and with it a hefty boost to the local economy. 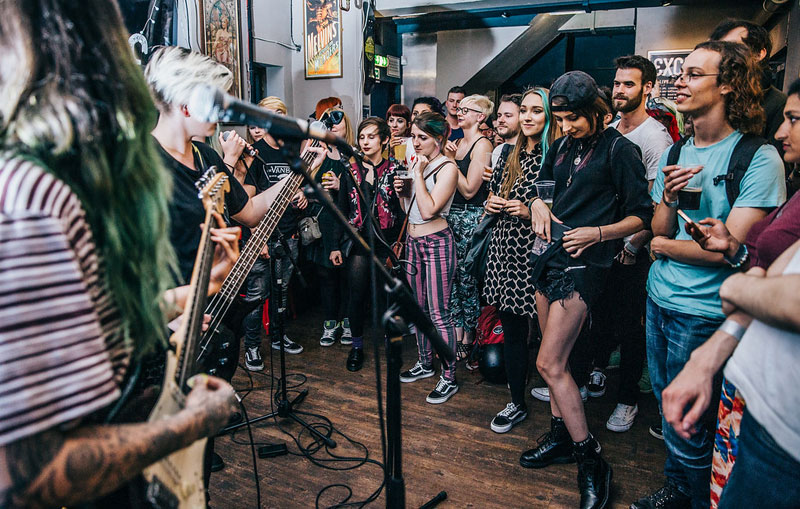 A census carried out by UK Music, an industry-funded body, and Buckinghamshire New University showed that live music generated £123million in revenue for Bristol in 2015. Yet that same year, 50% of our music venues were affected by development, noise or planning issues. So what’s going on? Why is it that the very places which contribute so much to the cultural and economic lifeblood of our city are coming under threat?

The latest in a slew of venues across the city facing the negative impact of Bristol’s development boom is Thekla. This mighty cargo ship has been a landmark on the Bristol harbourside for 34 years, but as many of us are sadly aware, in early November 2017 Bristol City Council approved a planning application for 36 flats to be built on nearby Redcliffe Wharf which calls into question the future of this local cultural icon.

Alex Black, general manager at Thekla, explains that inadequate sound assessments lie at the root of the problem. “The developer undertook an initial assessment at a reasonable time on a Friday,” he says, “but it was a night when only one of our two rooms was open. That means it didn’t give a true representation of our full output.”

Because of this, the flats are likely to be constructed without enough soundproofing, which could result in complaints from residents affected by noise from the venue later down the line. With an estimated 30% of the UK’s live music venues closing over the last decade as a result of similar issues it’s likely that these complaints would lead to the same fate for Thekla.

To raise awareness of the issue, the venue launched its #SaveThekla campaign, which is urging people to share their photos of Thekla and the experiences they’ve had on the boat under the hashtag on social media. “Already we’ve had a fantastic response to the campaign,” says Alex. “The support from people across Bristol, national and international artists, as well as industry magazines, has been really overwhelming.”

The campaign has also proved a catalyst for further discussions between the venue and the developer, Complex Development Projects. “They’ve expressed an interest to work with us on the matter,” says Alex, “and hopefully they will. But we’re still asking everyone to get behind us and share their stories under #SaveThekla. We want to stay in the minds of the people and the property developers so that they will honour their word in working with us. After all, it’s best for us and for future residents if another sound assessment is carried out when we are at our peak operating capacity, to ensure the right amount of soundproofing is used.”

Let’s hope the pledge comes to fruition, as Thekla occupies a unique and vital place within the Bristol music scene. With a capacity of 500, this mid-size venue is perfectly positioned to draw national and international artists on the brink of super-stardom to play in the city, and with them music fans from across the South West.

Just across the water from Thekla stands another of the city’s legendary music mainstays. For over 30 years The Louisiana, an intimate grassroots venue with a capacity of 140, has been a stalwart of the local scene and a barometer for the future success of local and national bands.

“…As a business, we aren’t against development, and having all those students on our doorstep is potentially good for us – all we ask is that developers take the necessary measures…”

“There are certain promoters who will put on shows here to see how the Bristol audience reacts,” says owner Mig Schillace. “If a band does well, the promoters know they are capable of going on to play a much bigger venue.” This certainly rings true, with headliners such as Super Furry Animals, Placebo, Coldplay and The Chemical Brothers all performing at The Louis early on in their careers.

As well as attracting upcoming nationals to Bristol, the place has played a pivotal role in nurturing home-grown talent through the years. “We try and do as much as we can to support local artists,” says Mig. “It’s venues like us that provide a platform for bands to work through, play a few songs and build up a fan base. Then they can go on and play bigger venues. 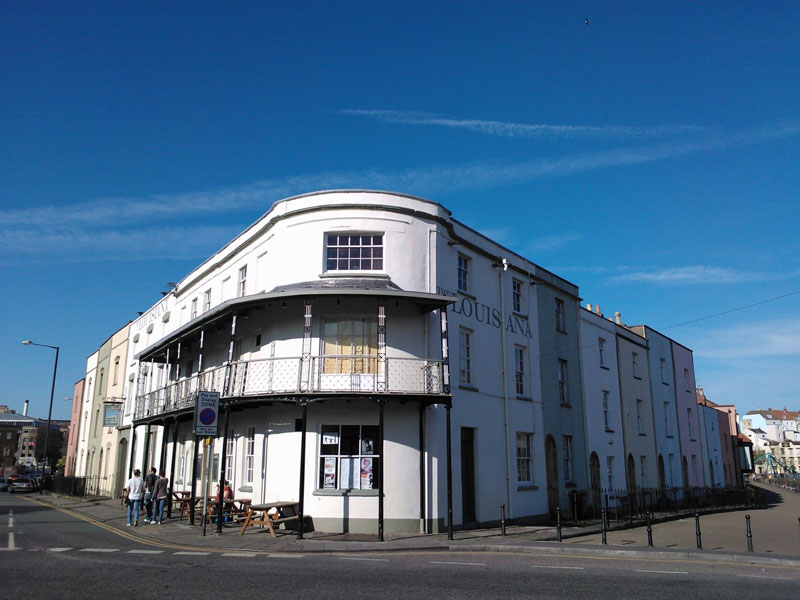 The Louisiana. Image by Ania Shrimpton

“What we try and do is encourage these bands to learn how to put on a show, so they can do it themselves and not have to rely on other people. We’ll help out with things like advertising, provide the room and top engineers, but it’s up to them to get people through the door. It’s something that a lot of venues around the city do because it motivates young bands and gives them valuable understanding of the work that goes into organising a good night.”

It’s a method that works, with Bristol groups such as Idles, Lice, The Shimmer Band, and Scarlet Rascal all taking the stage at The Louis in recent years, and going on to forge a name for themselves in the music industry. With support from local live haunts, upcoming artists have room to rise, develop and become the next generation of Bristol’s musical pioneers, furthering the city’s reputation as an epicentre for culture and creativity.

“Culturally, the independent music scene is really important – at a local and national level,” says Mig. “This is something that venue owners have recognised for years, and now organisations like UK Music and Music Venue Trust are getting behind us to lobby the idea that music venues, especially those at grassroots level, should be held in the same esteem as art galleries or theatres for the contribution they make to the culture and economy of the UK.” 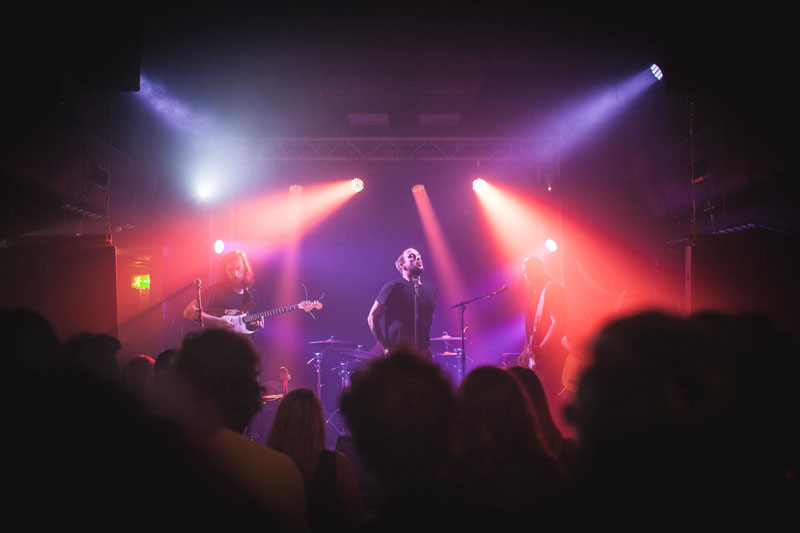 Bristol band Idles started out at grassroots venues and had a great 2017, even supporting Food Fighters

The importance of the emergence of Music Venue Trust in 2014 is reiterated by Matt Otridge, co-owner of Exchange in Old Market. “When I was first made aware of the work of Music Venue Trust I thought it made complete sense,” he says. “Until it was established, venue owners had no support but now there is a community where we can come together to talk about issues and exchange ideas and all of a sudden we don’t feel so alone.”

It seems only fitting that, finally, our owners and promoters have a forum of their own and a platform on which to join together to effect change. For years the venues that they have run have been places where people can come together to enjoy shared experiences, swap ideas, and forge relationships that strengthen the social and economic fabric of the city – and that is why Matt and his business partners decided to run Exchange as a community interest company from April 2017.

“What we do has a community and cultural impact,” he explains. “No-one becomes a venue owner to become rich, we do it because we believe in the value music brings to people’s lives.” It’s a model that is being adopted by an increasing number of venues across the UK and one that is proving a strong weapon in the fight against development as more and more people begin to recognise that live music is culturally relevant as opposed to a noisy nuisance.

Matt and his team at Exchange are dedicated to finding ways to move beyond live music and offer more besides, with the aim of further enriching life for the surrounding community. “We opened the coffee shop about a year ago and then soon afterwards friends of ours moved in upstairs and started the record shop. Now we have a recording studio downstairs as well as the live music room at the back.

“Moving forward, we’d like to make even more of the facilities we have here – particularly the live music room, which is empty for most of the day. Already BIMM [the Bristol branch of the British and Irish Modern Music Institute] use it for assessments and auditions and we also have jazz band practice here once a week, theatre group rehearsals and punk-rock yoga on a Saturday.

“But we want it to become a real community space. There’s no hire fee to use it during the daytime, and we’d like to encourage people with ideas to come forward and share them with us. If the idea is fully formed they can just come in and get going. If not, we’ll work with them to get their idea off the ground. It’s our natural evolution as a community interest company.”

“…No-one becomes a venue owner to become rich, we do it because we believe in the value music brings to people’s lives…”

Despite the venue’s contribution to the character, wealth and success of the city, Exchange, like Thekla, exists in the shadow of development. In September 2017, five years after the venue opened, a vast block of student flats was built directly behind it. “I wouldn’t say it’s forced us to change what we are doing,” says Matt, “but we are more wary about what we put on. We chose this location in Old Market because it was away from residential areas and now we’ve got a consideration that wasn’t here when we moved in.

“As a business we aren’t against development, and having all those students on our doorstep is potentially good for us. All we’re asking is that developers take the necessary measures to provide adequate soundproofing so residents and venues can live side by side without worry.”

It is a simple request, and one that – thanks to initiatives such as UK Music and Music Venue Trust, as well as the continued tenacity of our independent venues – seems to be gaining traction. Earlier this year, an ‘agent of change’ principle was added to the planning bill that states new developments must shoulder responsibility for compliance if they are situated near an existing music venue.

While it is yet to be seen how effective this principle will prove in reality, it is a definite step in the right direction. In Bristol, it’ll hopefully bolster a wider movement toward smarter urban planning that preserves the unique blend of culture, community and creativity that defines the city and allows our independent music venues to thrive.

• Independent Venue Week is back this month, from 29 January to 4 February. What better way to beat the winter blues than to get out and listen to top local acts in the city’s finest grassroots venues? Find out who’s playing where at independentvenueweek.com

Previous
E-Bike Directory: where to buy