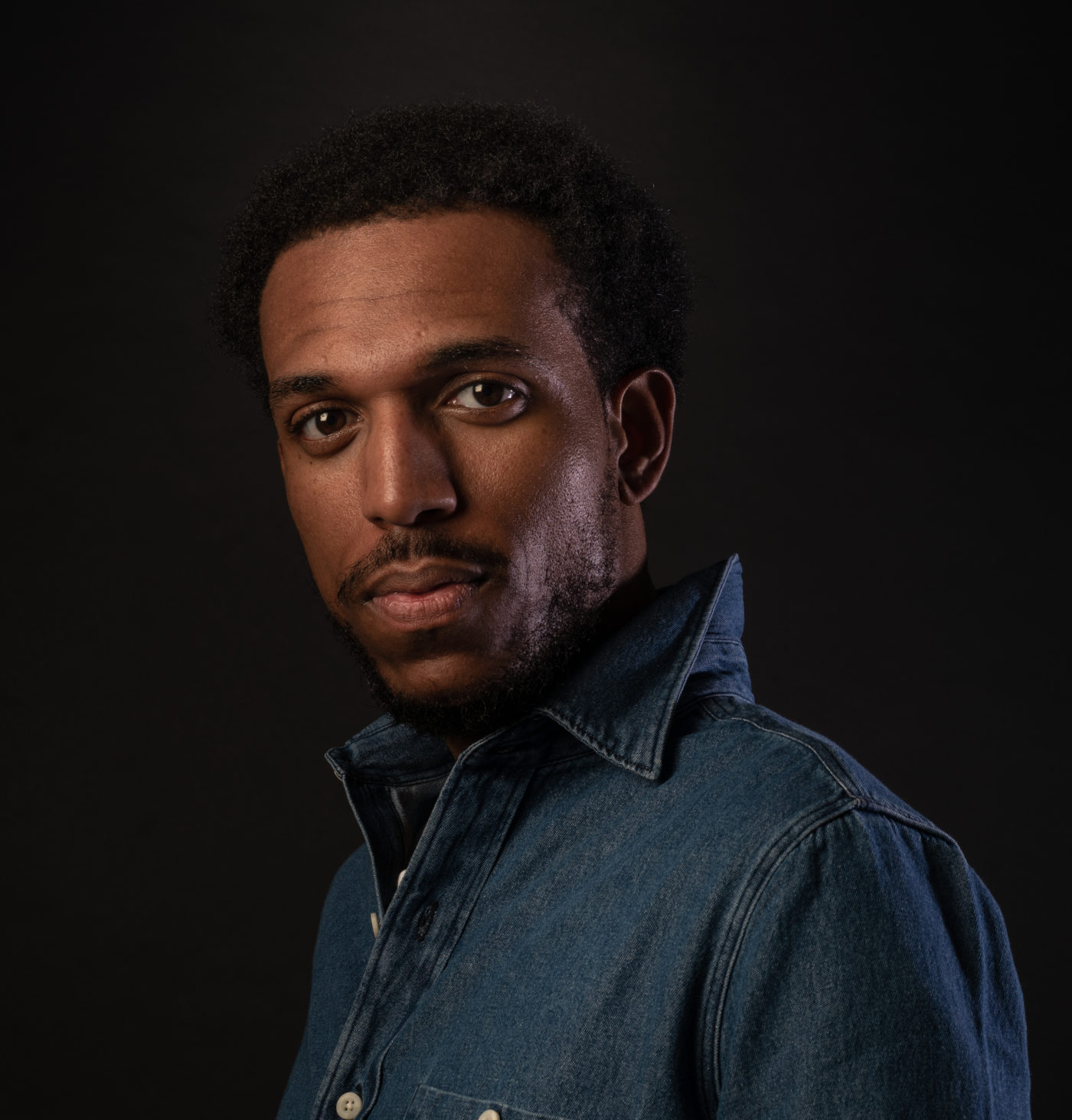 In the December issue, we meet the local speaker, podcaster and presenter and learn more about his various local projects. Photography by Ben Hooper

What brought you to Bristol and why have you stayed?
In this respect my American accent can be a bit deceiving – I was actually born in Bristol. My father is British-Caribbean and is from here in Bristol, my mother is African-American and from Washington, D.C. My dad ended up going to university in the States where he met my mom. They got married in D.C then moved to Bristol. After having my brother and me, my mom got home sick so my family moved to the States to be closer to her side of the family. During the summers my father would send my brother and I back to Bristol to see my grandparents and the rest of our family over here. I come from a very multicultural family. Being British-American has given me an insight into various cultures and realities. That being said, I don’t think many British-American stories get told that often. I decided to move back to Bristol from the States 10 years ago. I love this city. My family has very strong ties here and has done so ever since my grandparents moved here from Jamaica during the Windrush Generation. I’m a Bristol boy with an American accent; it’s rare but it’s my reality.

Tell us about the projects you are currently working on
I’m working on a documentary called Race & Gender Unfiltered. It’s a film that looks at social change through social healing. I believe issues of race and gender exist so predominantly because there’s a great deal of unprocessed trauma, along with various other things. At the crux of social issues are wounded people. The documentary explores various people’s experiences of trauma and looks at how we can collectively create positive systemic change by first healing ourselves. I have a podcast under the same name, Race & Gender Unfiltered, which you can find on most streaming platforms. I’ve had some great guests on and the response to the show has been really special. As someone who is passionate about systemic change I’m very interested in getting people to exercise their power to vote. Next year I’ll be running a campaign in the lead up to the mayoral elections to engage more people in the voting process, particularly young people. We’ll also be educating people on policies and how they impact our different communities. Along with the local elections and the 13 direct elected mayors who are up for election there are also 40 police commissioners running nationwide for election/re-election as well as elections in the parliaments and assemblies. Next year is a big election year for our country and it’s important that we’re all conscious citizens, now more than ever.

Have your aims changed this year and, if so, how?
Like many others, this year has changed a lot for me. I’ve become much more focused on the issues I care about and even more committed to playing my role in helping to make this world a more equal and equitable place for everyone in it. My aim is to help heal this country from the inside out and there’s a lot of work to do. Along with that I’m also intentionally putting more of my energy into supporting the Black community and helping us heal from generations of trauma that we’ve endured and continue to endure. Being a person of colour in the western world comes with copious amounts of emotional abuse along with systemic injustices. This year I made a commitment to myself to do what I can where I can the best I can.

I’ll be running a campaign in the lead up to the mayoral elections to engage more people in the voting process, particularly young people. We’ll also be educating people on policies

What are your ambitions for the next year?
My ambitions next year are to grow the projects I’m currently working on. I want to live a year that reflects my true power and not my fears. I’ll be continuing my journey as a leader, healer and change maker.

What big positive have you taken from 2020?
I’m actually incredibly grateful for this year despite everything we’ve all been through. I feel that many of us have gained an awareness that wouldn’t have happened otherwise. There’s a rising in our collective consciousness that I see manifesting itself in different ways and that’s a beautiful thing to witness and be part of.

Who deserves a special shout-out in Bristol for their work this year?
There are a lot of people who deserve special shout-outs in Bristol but I think the young organisers of the Bristol Black Lives Matter protest have to be one of them. I’ve been incredibly inspired by them. I love seeing young people standing up for what they believe in despite the odds against them. It’s a lesson to us all.

What’s a typical day for you?
During the week I’m usually up at 6am. I start the day off writing down what I can remember from my dreams, then do a free-write for five minutes of whatever comes to me at the time. After some affirmations, a quick Russian lesson on Duolingo and some exercise, it’s breakfast, a shower and then on to whatever work I have on that day. I love cooking so that will take up some of my time as well. I have a pretty detailed schedule each day but I always give myself room to be flexible and go wherever the energy is for me at that moment. I think it’s important to check-in with yourself and listen to what your intuition is saying to you. For instance, sometimes my schedule will say it’s time to read but my energy is really calling for me to watch a documentary that I’ve been meaning to watch for ages. For me it’s about being sensitive to what’s going on inwardly; when we’re rushing around being busy it’s not always easy to do that.

Whose music are you listening to at the moment?
I love music – this is such a big question! I listen to a lot of different types of music, it really depends what type of mood and season of my life I’m in. In the mornings and evenings I’m usually listening to relaxing atmospheric music or nature sounds. In regards to specific artists it’s often Bonobo, FKJ and Stevie Wonder. I’m really big on vocals as well; I love Whitney, Mariah and Toni Braxton, it’s even better listening to their live performances. Mariah Carey’s Butterfly album has been getting some heavy rotation from me the past few months, it’s really been resonating with me energetically. I also listen to an online radio station called Soulection, which I love.

Share a few of your favourite places or businesses in Bristol
Blak Wave Productions, Black Girl Convention, Caribbean Croft in Stokes Croft – I’d live there if I could. If I’m meeting people for tea or coffee or getting some work done away from home I’m usually at The Social on Cheltenham Road. To be honest, I prefer to entertain at home or go to a friend’s house but I can’t wait for a good night out dancing when we’re allowed to.

So much of what we think about work is based on colonial and capitalist ideologies. I’ve begun reframing what work looks like for me, how I want my life to be and who I want in it

What did you learn from lockdown that you will carry with you?
I’ve learnt that we don’t have to always be moving so fast and trying to be hyper ‘productive’. Our worth shouldn’t be measured in how much we get done in a day. I’ve learned the importance of just being and recognising that even if I didn’t do anything that other people would consider to be ‘work’ all day I’m still worthy of being here on this Earth, I still matter. So much of what we think about work is based on colonial and capitalist ideologies. I’ve begun reframing what work looks like for me, how I want my life to be and who I want in it.

What would be your first action if you were mayor of Bristol?
One of the first things I would do would be to focus on the emotional healing of everyone who lived in the city. Trying to progress issues related to Bristol without addressing the trauma that many people experience is treating the symptom but not the cause. I would operate with a ‘people over profit’ mentality recognising that’s actually the most sustainable way of increasing the capital of this city. I would also implement a system for people to healthily interrogate the mayor and Bristol City Council, and collaborate on solutions to progress the various communities in our city. I believe part of my role as mayor would be to empower people to come up with solutions for their own communities and for me as mayor to sense-check it with a certified team then help make it happen. My ideology as mayor wouldn’t be about what I could fix but rather what I could heal.

Tell us something about yourself that might surprise us
I used to be a competitive 800-metre runner back in the States. In 2007 I became a US Nike national champion with the fastest time in America with my relay team.

Next
At Home On The Range: All About The Cooks
Start typing to see results or hit ESC to close
bristol gender film tv history
See all results