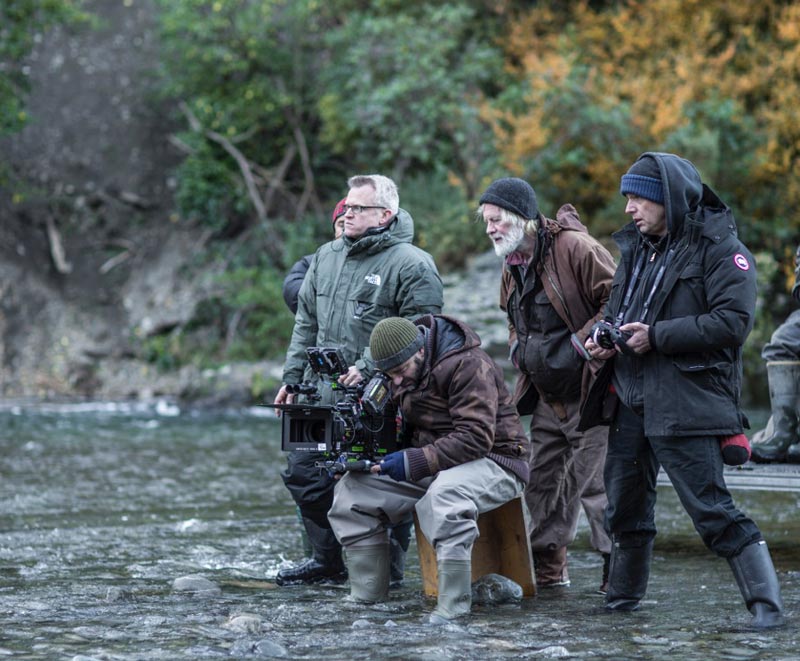 I studied drama at Bristol University, concentrating as much as I could on film. I travelled 15 miles in all directions and came across my future home in Clevedon, falling in love with the seafront. It was a very different town back then, 1988. It’s definitely having a growth spurt right now, in terms of being the kind of town people love to visit or think about moving to.

I wrote White Noise (Michael Keaton thriller) and have written and directed The Big Swap, The Ghost of Greville Lodge, Keeping Mum (comedy with Rowan Atkinson, Kristin Scott Thomas, Maggie Smith and the late Patrick Swayze) and most recently, Mum’s List (shot in Clevedon and based on St John Greene’s local memoir) and The Stolen.

The Stolen is a western, except it’s not. It’s an adventure set in the gold rush of 1870s New Zealand, when Europeans were settling in search of fortune. Alice Eve plays an English gentrified woman whose husband is killed and her newborn baby kidnapped. When she begins receiving ransom notes she traces them to a new gold mining town, meeting all sorts of perils which ready her to fight when the time comes. Most westerns dealing with journeys are about the men: the gruff leader, the psycho it’s best to avoid, the baddie with a heart of gold, and the women in the wagon – the hookers and dance-girls. We have all those types but what’s fresh and current is that this film is about the women in the wagon.

I’m proud to have been involved in Another Day of Life – a combination of animation and documentary based on Polish reporter Ryszard Kapuscinski’s memoir of his time covering the horrific Angolan Civil War in the mid-1970s.

I’m a big fan of the late British author Graham Joyce – very grounded, literary, supernatural works that ride the line between real and imagined. I’m an avid cinemagoer; favourites this year have been Hostiles and Three Billboards Outside Ebbing Missouri. I chuckled all the way through Game Night, which I hadn’t expected to! And I can’t wait to see Isle Of Dogs.

Bristol’s an exciting place for film and TV production. It’s probably in as good a state as it’s ever been, with The Bottle Yard studios doing so well. Feature film producers and filmmakers are thinner on the ground than those working in TV, so I tend to find myself in London or abroad when it comes to the actual workload (though I’ll always keep post-production here in the West if I can). It’s a city of diversity, range and talent; filmmakers with voices that deserve to be heard. Beyond the known entities like Aardman, smaller companies are carving a name for themselves in their niche: Happy Hour Productions, for example, with its success in advertising and low-budget movies.

I sorely regret missing Portico Quartet at the Lantern; and Jaws with a live orchestra. They really need to do that with The Good, The Bad and The Ugly – all of Sergio Leone’s films, actually! I was excited by the Curzon showing A Fistful of Dollars in 4k: its the movie that, when I was 10, made me want to make movies.

I had a puppet made of me as a trial for a potential Gerry Anderson-styled TV show. The project never came to anything, and I don’t think he was ever even put together in one piece. It’s a strange thought, though, to know there’s a puppet Niall pootling around. I just hope he’s being treated well. I’d like to pedestrianise Clevedon’s town centre roads to create more of a high street, stretching from the only greengrocer’s in town (indie, The Veg Box) and a new paleo food shop (Sew & Arrow), through a variety of craft boutiques and restaurants to the grand old cinema. I’d make the Theatre Shop a permanent fixture; it’s amazing Clevedon has a space like that with all it offers.