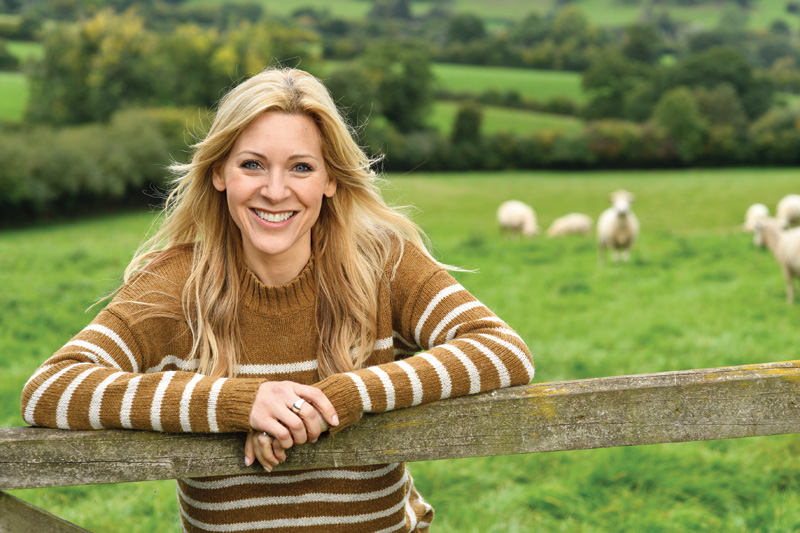 Naomi Wilkinson: A force of nature

We look back to when we spoke to television presenter and eco-warrior Naomi Wilkinson at the end of last year, about her inspirational extra-curricular activism and how she helps her local community do their bit for the environment. Interview by Simon Horsford.

Television presenter, eco-warrior, surfer, wannabe Strictly contestant – there are many sides to Bristol-born Naomi Wilkinson. According to her Twitter page, she’s also a dab hand at cracking Rubix cubes. Oh, and she does panto too.

Of these, and in keeping with current mood, it’s as an ardent believer in raising awareness about the environment that inspires Wilkinson most, who is best known for fronting two TV series on CBBC: Naomi’s Nightmares of Nature and Marrying Mum and Dad.

“The main passion for me is the eco-warrior thing because it kind of ties in with everything I do and the surfing is heavily connected with what’s going on in the ocean,” says the infectiously enthusiastic Wilkinson when we meet for a coffee. “[It’s also about] our whole awareness of what is happening to the planet, how we are living and how it’s having a massive impact.”

Wilkinson isn’t suddenly jumping on the eco bandwagon. For 20 years, she has been an ambassador for the Young People’s Trust for the Environment, which encourages an understanding of issues such as climate change, pollution, deforestation and endangered flora and fauna. “When I first went to an awards ceremony,” she recalls, “it was all about these children who had done projects about eliminating plastic bags. Straight away I was thinking this is amazing, why are we not all talking about it? Since then I have been banging on about it to whoever will listen. So I am so relieved that at last people have become more aware [we were speaking a couple of days before the global climate ‘strike’ day] but I am still frustrated because it doesn’t feel as though enough is happening. It feels like people know the problem, but are not making changes in their lives; it’s just the simple things like remembering your coffee cup, or a bag for your shopping.”

It helps that Wilkinson is such a popular face on children’s TV. She has visited numerous schools and points out that they are “getting fantastic tutoring” about the environment and climate change. “They are on the ball and are leading the way,” she adds. Adults, she believes, are slower in changing their habits, although Wilkinson admits, “it is hard and inconvenient and we are used to things being easy for us”.

I wonder whether it’s a matter of people believing that small changes in their own routines to do with recycling and such like won’t have any effect? “Myths go round and they are told the tiny little changes they make don’t matter, but when you look at the massive scale of businesses and plastic production, and I agree it has got to be addressed in those areas first and foremost, I also think that each person doing something, times millions of people, will have an effect.” Even in a large secondary school, she suggests, “if you look at how many plastic bottles they might consume in a week, if each child were to stop bringing in, or buying, plastic bottles every day then that would account for thousands of bottles a week. So it feels like small changes but they can be massive”. Our concern shouldn’t stop with recycling though; “we also have to consider what is happening to all the recycling when it is shipped abroad and burnt and what effect that is having,” she says.

“I think that each person doing something, times millions of people, will have an effect.”

When she’s not away filming, Wilkinson has been working within her local community (she now lives in north west London) to come up with ideas for schools and businesses to do their bit. Her group has also been teamed up with Jo Ruxton, who produced award-winning documentary A Plastic Ocean to explore the fragile state of our oceans and the consequences of our disposable lifestyle.

David Attenborough, unsurprisingly, is something of a hero to Naomi, and she shares the philosophy of Senegalese conservationist Baba Diou, who, more than 50 years ago, said: “In the end we will conserve only what we love, we will love only what we understand and we will understand only what we are taught.”

It all seems a long way from Wilkinson’s early years when, after graduating from the London School of Dance in Bedford where she trained to be a dance teacher, she spent time as a Butlin’s Redcoat (it was “brilliant”). During her spell in Minehead, she sent out numerous showreels – she had long harboured a desire to work in children’s TV – which eventually landed her a job on Wakey! Wakey! with the now defunct Carlton Kids. She then presented Milkshake! on Five for 10 years during which she composed songs and choreographed dance numbers, hence her desire to appear on Strictly.

Since 2010, she has featured in numerous programmes on CBBC, among them Live ’n’ Deadly with Steve Backshall, which took viewers on an interactive journey and was crammed with dares, animals and adventures. Her stint there led to Naomi’s Nightmares of Nature – there have been four series so far – in which she has to conquer various fears and challenges. I wonder if the idea was to offer a female counterpoint to Backshall? “Yes, I suppose so, but because I am not an animal expert and didn’t come from that background, the idea was to have someone that the viewers could connect with. We all go on a journey together and I meet experts and get told what I should be afraid of. They probably chose me because I had a genuine fear of quite a lot of animals and I wear my heart on my sleeve. My emotions are always a little bit on the surface, unfortunately.”

The result, though, is hugely entertaining, with Wilkinson an engagingly honest presenter who has tackled everything from abseiling into a bat-filled cave in Borneo and swimming with sharks (no cage) to encountering river crocodiles in Australia (her number-one scary creature), hang-gliding in Brazil and wing-walking (“like standing in front of the most powerful fan you can imagine while being on a rollercoaster”). Her favourite? “Parahawking in South Wales is pretty hard to top. It involved paragliding alongside a red kite.”

Fun and exciting as the programmes are, they do also have much to say about conquering fear. “Until you’ve experienced something, you don’t know whether you are going to like it or not,” says Wilkinson. “I found this a lot of times on Nightmares: a challenge I was dreading the night before, then actually, the next day, it turned out to be one of the best things I’ve ever done.

“I say to children, we always visualise something we are worried about and nine times out of 10, it’s not how we imagined it. I do think whenever you can conquer a fear, or do something you were putting off, it comes with a sense of elation and pride. That’s why I love things like Go Ape [the outdoor adventure company] because every time you challenge yourself and it is difficult you do feel brilliant.”

Wilkinson does add with a smile that she’s learned it’s probably best never to tell the producers what you are really afraid of “as the next day you’ll end up in the tank with it”. But “it’s funny,” she adds, “because it has cured a lot of my phobias, such as being underwater, and I’m fine with spiders now.”

The most terrifying time, she recalls, was when they went to film lions and were in open Jeeps, watching their behaviour change from day to night. “The lions hadn’t fed for a while and we couldn’t see them as it was dark. I thought that was the way my life was going to end.” And despite all her adventures with a variety of creepy creatures, she has no desire to appear on I’m A Celebrity…

Growing up in Bristol, Wilkinson gained a love of nature from her parents, who were volunteers for the Avon Wildlife Trust. Until around 20 years ago, home was in Henleaze, and she still returns to the city to see family, while Nightmares is produced at the BBC’s Natural History Unit on Whiteladies Road. “It’s such a cosmopolitan, buzzing city and there always seems to be so much going on. It’s got a reputation for being eco-friendly too and I’m proud of that. I’ve just got great memories of Bristol.” Return visits might involve a curry at Tikka Flame on the harbourside before hitting a couple of the bars in the area.

Elsewhere on TV, Wilkinson presents Marrying Mum and Dad, with Ed Petrie, where children are given free rein – to an extent – to arrange their parents’ wedding day, choosing everything from the theme to the venue, entertainment and outfits. One of the maddest things they were asked to do was a haunted house. “For transport they [the children] wanted a hearse but we talked them out of that, but the bride and groom did step out of a coffin to say their vows.” Others have seen the father of the bride dressed as Batman and the groom as a gorilla.

Wilkinson has had guest slots on Blue Peter and has also done films on Countryfile, covering the World Conker Championships and paddle-boarding with a spaniel. Come Christmas, Wilkinson is also a regular on the panto circuit; she’s played at the Theatre Royal in Bath and hopes one day to appear at the Bristol Hippodrome. This year [2019] she plays the lead in Cinderella at the Pavilion Theatre in Worthing.

A personality and presenter for all seasons, then. What’s more, she’s not only spreading the word about environmental issues, but has also made a mockery of comedian W.C. Fields’ dictum of never working with children and animals.

Next
Back to black: the dark & historic art of gallows humour
Start typing to see results or hit ESC to close
bristol gender film tv history
See all results