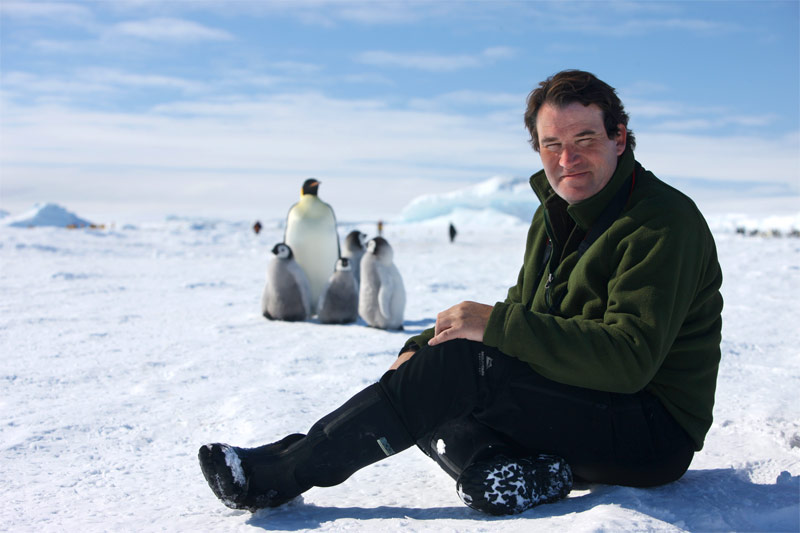 Our Planet: An interview with director Alastair Fothergill

The Covid-19 pandemic has wreaked havoc in countries across the world, caused a global health crisis and forced economies to slow down due to strict quarantine measures. The outbreak has also had a positive and dramatic impact on our environment – there has been a reduction of carbon emissions in certain regions and an improvement in air quality. But how sustainable is this positive effect in the long term?

In contemplation of this, we look back to Jessica Hope’s interview in 2019 with Alistair Fothergill – the producer of Our Planet, the ground-breaking documentary released on Netflix last year – who addressed the issues that are harming our planet.

Having travelled to the planet’s most treacherous environments, explored its vast oceans, and encountered the freezing temperatures of the Arctic, director and producer Alastair Fothergill has seen more of the natural wonders of the Earth than most. Now, more than ever, these are under threat from climate change – and without urgent intervention will soon be lost forever.

“Our biggest single challenge at the moment is global warming. It’s having an impact on all habitats and producing effects worldwide,” says Fothergill, who is renowned for his work producing some of the BBC’s landmark natural history documentaries such as Planet Earth and Frozen Planet.

This sense of urgency is what inspired Fothergill and producer Keith Scholey to create their latest documentary series, Our Planet. “I felt the time had come to not only celebrate the natural world and look at what remains, but delve into more depth about the challenges our planet faces,” he says.

The eight-part series, made in partnership with World Wide Fund for Nature (WWF), showcases the most precious species and habitats from across all seven continents, from the most remote corners of the Arctic to the jungles of South America, via the deep dark oceans.

“We don’t film destruction. Our Planet is about the value of the habitat. And we talk about biodiversity and what we must save if we want to pass the world on to the next generation,” says Fothergill.

The series also reflects on the positive changes happening in the environment, such as the sighting of an aggregation of more than 200 humpback whales feeding off of South Africa. A commercial whaling ban was implemented in the 1980s after the whale population had been decimated from worldwide hunting, therefore discovering the whales off of South Africa means a considerable increase in its population.

The crew were also able to capture remarkable footage from the Chernobyl nuclear disaster zone. “Using motion-controlled cameras that were left there for two years, we were able to film wolves in Chernobyl. Wolves are the top predator, and you only get them if the whole habitat is healthy. And there are in fact more wolves in the exclusion zone of Chernobyl than all the surrounding areas,” he says.

News of the series shot onto the world stage when its first advert debuted to viewers at the Super Bowl final in February 2019 – this was also the only advert that Netflix purchased to be shown at the big game.

“I think this reflects Netflix’s extraordinary interest in the series. The Super Bowl is the most expensive advertising in America – and probably the world. They’ve never done an advert at the Superbowl for a documentary before, and they estimate that 120 million people viewed it,” says Fothergill.

Broadcasting the series through Netflix also means that the series’ core message can be spread across a worldwide audience. “From 5 April we will be shown in 190 countries, with 139 million subscribers. A lot of those subscribers are aged 16–30, which is the age group which has deserted terrestrial TV, and they are also the people who really care about the environment,” he says. “We’ll be on Netflix for months and years to come, allowing us to continue the conversation.”

The discussion about preserving the Earth definitely isn’t wavering

Following the series of global climate strikes where children from more than 100 countries across the world walk out of their classrooms to protest against the lack of governmental action in preventing climate change, the discussion about preserving the Earth definitely isn’t wavering.

Working together on a joint project, WWF, Netflix, PHORIA and Google have created an augmented reality (AR) globe installation called REWILD Our Planet, which went on tour around the UK, Singapore and New York. The first installation opened at We The Curious in Bristol last year. Visitors were able to explore the planet through AR, investigating the vast habitats of animals from across the world as if they were really there.

From a young age, Fothergill was fascinated by animals and the natural world. Born in London, he went to Harrow before reading zoology at Durham University where he entered a competition for students to make a natural history documentary. “We went to Botswana and made a really rather bad film. But it was a wonderful way of appreciating that film-making was a way for me to show my passion for the natural world to other people.”

After graduating, he joined the BBC’s Natural History Unit in Bristol in 1983, producing programmes such as The Really Wild Show. His first job with Sir David Attenborough was on the 1990 series The Trials of Life, and has continued to collaborate with him on countless projects ever since.

Attenborough was, therefore, a natural fit then to narrate Our Planet. “Most of the damage we have done to the planet has happened during David’s lifetime,” says Fothergill. “He’s 93 in May, and has a legacy. He’s now decided to be more outspoken about [climate change] than ever before.

“He’s the voice that is really trusted. We are saying some stark facts [in Our Planet] – some would say controversial facts – but they’re not. By working with WWF, we are 100% certain that it’s scientifically accurate. But we are saying things that some people really don’t want to hear. But when it comes from David with his authority, that’s what is absolutely critical to us.”

After almost 30 years at the Natural History Unit, including a spell as the unit’s leader at only aged 32, Fothergill and Keith Scholey set up wildlife production company Silverback Films in 2012. Recognised for his outstanding contribution to natural history programming, Fothergill was made a Fellow of the Royal Television Society in 2016, and was presented with an honorary doctorate from the University of Bristol in 2018.

Fothergill hopes that Our Planet continues to encourage people to take accountability for their actions and make a real change to the environment. He says, “The word ‘Our’ implies ownership and responsibility. We only have one.”

After dedicating much of his life to helping promote and preserve the natural world, Fothergill hopes that Our Planet continues to encourage people to take accountability for their actions and make a real change to the environment. He says, “The word ‘Our’ implies ownership and responsibility. We only have one.”

In the long term, the Covid-19 pandemic may offer opportunities leading to environmental action. We will have a new baseline of what can be achieved digitally and will become more conscious of our food waste in times of scarcity. Covid-19 has a dark cost to our lives, healthcare systems and mental health of people around the world. But it has also shown us that communities can make a difference when they take care of each other. The pandemic may have granted us an opportunity to develop long-lasting sustainable habits that are incidentally beneficial to our society and our environment.

Our Planet is still available to watch on Netflix.