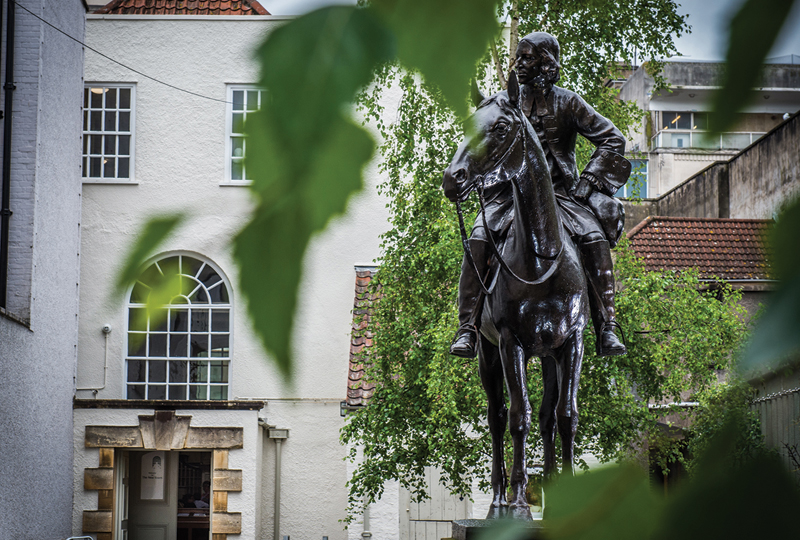 A new era for The
New Room museum

The most famous Bristol attraction you’ve probably never heard of, and what’s changed there during 2017

How much remains today of what went on in Bristol during the 18th century? Many of our best-known local institutions date back to that period: Colston’s School (founded 1710), Bristol Royal Infirmary (opened 1737), the Exchange in Corn Street (built 1743), the original glass-roofed St Nicholas Market (built 1745) and the Theatre Royal (opened 1766). In the middle of that list is The New Room in the Horsefair, established as the world’s first Methodist chapel in 1739.

The New Room? It may well be the most famous historic Bristol attraction you’ve never heard of, quietly tucked away in the heart of Broadmead but internationally recognised as the starting point for a movement which today has over 75 million members across the globe.

The New Room is the oldest Methodist chapel in the world. It receives over 25,000 visitors from all over the world every year, and has both a fascinating history and a profound resonance with challenging issues we still face in today’s modern world. Better known locally as John Wesley’s Chapel, the building was designated by Historic England in 1959 as a Grade I building and occupies the only piece of land in Broadmead whose freehold has not been bought by Bristol City Council.

This has been a particularly significant year for the chapel, seeing the successful completion of an 18-month building project to create a brand new visitor centre, funded by a £2.6m National Lottery grant plus £1.4m from the Bristol Methodist District and other smaller trusts. The visitor centre was officially opened in July by HRH The Duke of Gloucester and features a state-of-the-art museum, an artisan café and gift shop, an education/conference room and a library and archive. Catering for all ages, the museum features eye-catching exhibits and creative displays, with thought-provoking stories which may surprise many visitors.

John Wesley, who was ranked at number 50 in the BBC’s Top 100 Britons poll, was – it turns out – a man ahead of his time: a pioneering 18th-century preacher and enlightened campaigner for causes like gender equality, abolition of slavery, healthcare, education, and the natural environment.

His forthright condemnation of the slave trade earned him powerful enemies because – as we all know to our shame – Bristol was an important centre for the slave trade. Indeed it was the UK’s leading slaving port, accounting for possibly one fifth of all the lucrative trade in slaves between 1698, (when Bristol merchants were first granted the right to participate) and 1807 (when the slave trade was abolished in the UK). Wesley was undeterred, despite the unpopularity of his ideas among the ruling classes, and in 1774 he published his Thoughts Upon Slavery, the first really successful anti-slavery publication aimed at a mass audience, which was circulated for many years both in England and America.

Because the slave trade brought tremendous wealth to Bristol-based investors and traders, they combined to try and silence Wesley’s opposition, most notably sparking the 1788 New Room Riot when men were paid to disrupt a service in the chapel at which Wesley was preaching against slavery.

Re-enactment of the riot was possibly the highlight of the day for the first school group to experience the new visitor centre when it opened in the summer. Year Five pupils from Begbrook Academy visited as part of their study of aspects of slavery. “The association of Wesley’s name with opposition to the slave trade means that the New Room is a great resource for students looking at the topic, which can be explored as part of the local history section of the national curriculum,” said Mandy Briggs, education officer for the New Room. “The exhibits we now have on display bring the entire story to life in such an engaging way that we’re attracting a higher level of interest than ever.”

The museum’s exhibits challenge visitors to consider stories of slavery that may surprise, and stories they can relate to – such as that of the slave who was severely whipped for the ‘crime’ of overfilling a tea-cup. Unusual works of art include a unique statue of a child, made out of chains, and a ‘calligram’ or word portrait, showing Wesley preaching with his bible open on the pulpit, created by using almost 14,000 words and telling the story of his life. Three years in the making, this historically important work dates from 1850, and was created by artist Louis Gluck Rosenthal who also produced biographical sketches of William Shakespeare, the Duke of Wellington, and Queen Victoria.

A newer and smaller artwork, The Wesley Chalk, measures in at just over 1cm, and defies the imagination by having carved into it a minute figure of John Wesley. It was created by a talented young Brazilian boy in 1998 to mark the 250th anniversary of the opening of the first Methodist school, Kingswood School, and is displayed in the room which is dedicated to Wesley and education.

This room, like all the others in the museum, asks visitors to reflect on some of the moral and ethical dilemmas that confronted Wesley and still persist to this day. His inclusion on the Top 100 Britons poll reflects the breadth of the causes he espoused, which – as one exhibition board suggests – could actually be reflected in a 21st-century political manifesto.

Living in a period when most workers were scarcely paid enough to live, with families enduring a hand-to-mouth existence, and rampant disease, crime, drunkenness and brutality commonplace, Wesley was unafraid to share his views on the wrongs of social inequality. So, alongside slavery and education, the museum addresses other issues such as how to reduce the gap between rich and poor, the importance of full employment, the promotion of tolerance, equal treatment for women and of taking a world view, and caring for the animals with whom we share our planet – plenty of thought-provoking stuff. Part of the new visitor centre, including a 40-seater café, occupies a light, airy atrium space which, along with the historic chapel itself, was used as the location for the first visiting art exhibition to grace the revamped New Room after its re-launch in the summer. Appropriately – since it ties in so well with the Wesleyan credo – the ‘I Am A Refugee’ exhibition celebrated the contributions of refugees past and present to life in the UK, and was opened to coincide with Refugee Week 2017.

“This was a major art exhibition, previously on display in the Houses of Parliament, and its showing in the New Room was its first outside London, so we felt very honoured to host it,” Mandy continued. “It was a highly appropriate first display for our newly refurbished exhibition space, graphically illustrating the significant contributions, by refugees who have made the UK their home, to the arts, science, sports, commerce, industry and social care in this country, and bringing to life their own unique stories.”

Developed by the Joint Council for the Welfare of Immigrants and design agency Coley Porter Bell, the exhibition featured three giant screens telling the stories and celebrating the achievements of people who entered the UK as refugees, including such well-known names as singers Freddie Mercury and Rita Ora, writer Judith Kerr, comedian Shappi Khorsandi, computer pioneer Dame Stephanie Shirley and 51 other famous and not-so-famous individuals.

The historic chapel itself is often the venue for free lunchtime concerts, frequently featuring visiting musicians or choirs on tour, which are always worth keeping an eye open for. A new series of concerts – Folk at the New Room – is currently in the pipeline and the chapel also hosted a wellbeing day as part of Bristol’s recent Healthy City Week. The artisan café – run by Ewa Kozdeba, who spent the previous nine years in charge of the café in At-Bristol (as it was known then) – is also attracting positive reviews for its food, drink and tranquil ambience.

So now you know – the New Room is not new at all, but a building which has been at the heart of Bristol’s history for nearly 300 years. And now it offers Bristolians unprecedented access to remarkable, but previously largely unknown, aspects of the city’s heritage, which are well worth investigating.