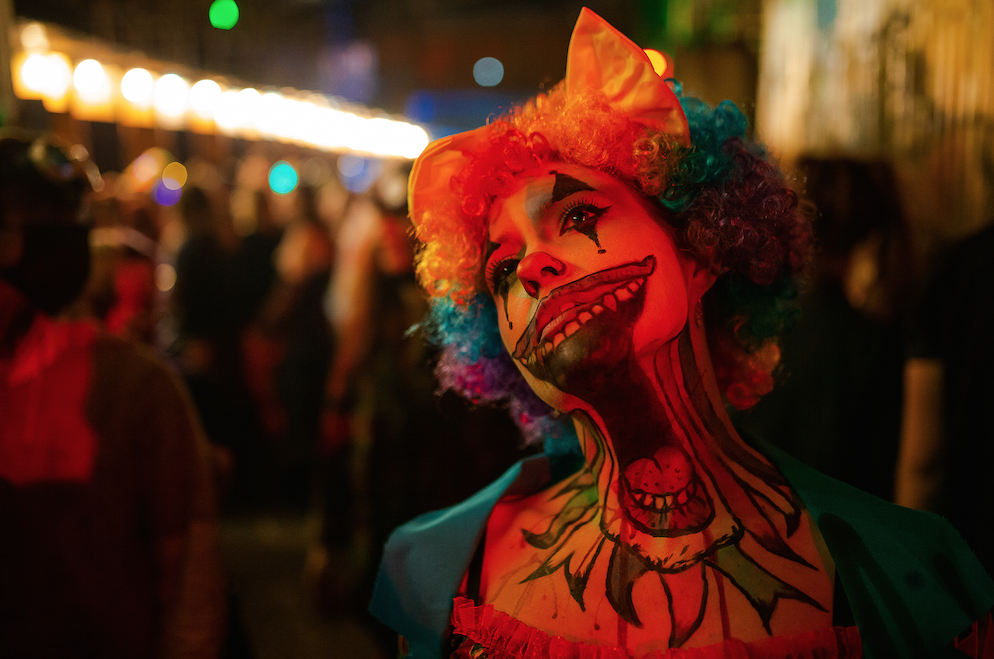 An army of radioactive zombies, sci-fi vampires, blood-splattered serial killers, cyborg monsters and other glamorous freaks descended on Bristol’s newest nightlife venue over Halloween weekend. Drawing a sell-out crowd of 3,500 revellers to a repurposed factory complex on industrial wasteland sandwiched between Temple Meads and St Phillips Causeway, this was the opening party for Area 404, the latest ambitious venture from the Bristol-based team behind Boomtown Fair festival, who are finally bringing their unique brand of immersive partying home after a decade of hosting one of the most original events in the summer calendar.

Celebrating its 10th anniversary this year, Boomtown Fair drew around 70,000 people to its vast outdoor location near Winchester back in August. Across 30 stages almost 500 artists and DJs played including Lauryn Hill, Salt-N-Pepa and The Streets. But Boomtown’s unique appeal lies less in its musical menu than its sense-swamping blend of bands, DJs, street theatre, visual art and stunning stage architecture. For four days every August, the South Downs National Park becomes a vast science-fiction theme park of futuristic cyberpunk stages, with wild detours into the Wild West and Elizabethan England.

The interior, meanwhile, offered a labyrinth of performance spaces blasting out 50 shades of underground music, from reggae to drum ‘n’ bass, guitar-strumming busker-pop to to acid house. One of the smaller venues, Decontamination Room, was decorated with macabre fake human body parts dangling from the ceiling. Another, Acid Chamber, had a cutting-edge speaker system mounted all along its bunker-like walls.

The most impressive space in Area 404 is the Core Reactor, a cavernous three-storey auditorium whose stark modernist interior recalls Manchester’s fabled Hacienda nightclub. This was the stage for the evening’s biggest acts, including a heart-warming hour of vintage reggae from old-school veterans Trojan Sound System and a floor-shaking, crowd-pleasing set from Kingdem, a left-field hip-hop collective featuring Rodney P,  Blak Twang and Ty.

Besides more than 20 live bands and DJs, Area 404’s launch was also full of references to Boomtown’s fictional back story, including the Bang Hai corporation that has long been part of the festival’s self-created mythology, and teams of actors bringing these subplots alive. The Bristol launch contained a loose narrative about an apocalyptic plague outbreak, with uniformed actors staging confrontations and emergency medical procedures throughout the evening. One particularly effective sequence involved an ‘infected’ patient in a glass-lined quarantine chamber who suddenly threw himself at the observation widow. splattering it with blood. Good clean fun for Halloween.

Boomtown has never been about big headline stars, rightly preferring to sell itself as an all-round sensory experience more than a conventional music festival. That said, a few more semi-famous names on the bill might have added an extra sense of occasion to this opening night. But by midnight, this lack of celebrity names scarcely mattered as the youthful crowd became the real stars of the show, throwing themselves into Halloween’s most hedonistic fancy-dress party with full-blooded relish. With two further events lined up this coming weekend (8 & 9 November), plus more at New Year, Area 404 already feels rich in potential, an imaginative and visually dazzling new addition to Bristol clubland.