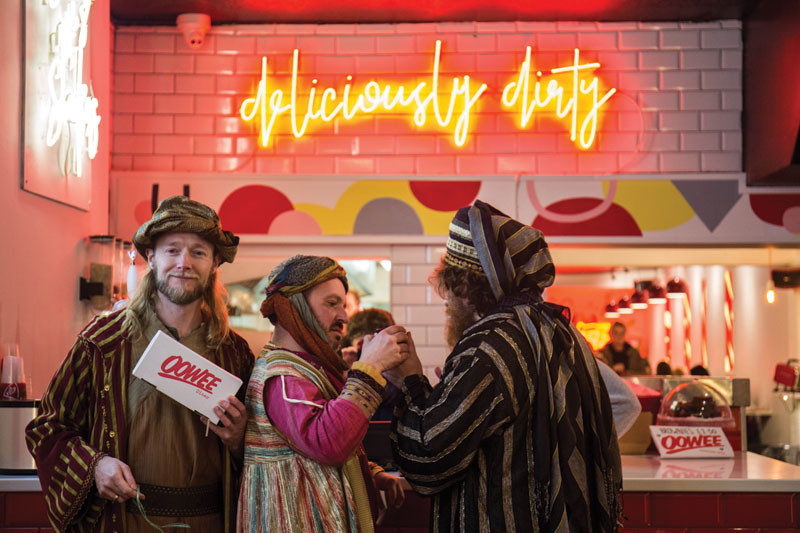 What’s new and what’s happening on Bedminster’s colourful, characterful main vein – and why should we shop there? We took a stroll around…

It’s not like we need to tell anyone how popular the streets this side of the river have become over the last few years – it certainly won’t have escaped the attention of those on the hunt for a home. We can’t help wanting to fly the flag for one of our fave corners of the city, and if you don’t live near Bedminster and Southville – if you haven’t been sucked, peepers-first, through each and every lovely shop front while strolling the huge street art festival of a summer’s day, or crawled the cosy cafés, quirky gift shops, cool eateries and trendy boozers on a winter’s evening – you mightn’t have considered its social hub North Street as a Christmas shopping destination.

It’s eclectic (did you know you could get some personalised book binding done for a loved one at Bristol Bound?) and creative (see the Upfest shop) with a high concentration of cracking charity shops – and you can incorporate all sorts of enjoyable activities into the day’s spree. We’d opt in on anything from a seriously swanky hot chocolate sesh at the new Zara’s Chocolates space, a Tobacco Factory matinee, and a massage at Beauty Lounge or newcomer Olive Tree Beauty, to a sit down and freshly baked bite at Mark’s Bread or Hobbs House after a spot of Ashtanga, Hatha or life drawing at Trika Yoga. Nearby on Cannon Street, an official Harry Potter store has even opened, selling wands and official wizarding merch.

We wouldn’t suggest heading there on matchday at Ashton Gate if you’ve got the car – you’ll seriously struggle to park – but a Saturday stroll over to Bedminster has endless merits. Wander there on a Sunday and you’ll have the crop of the Tobacco Factory market to choose from as well – find tasty tucker, unique gifts and sustainable fashion (Something Else retro/vintage clothing visits every second Sunday of the month). 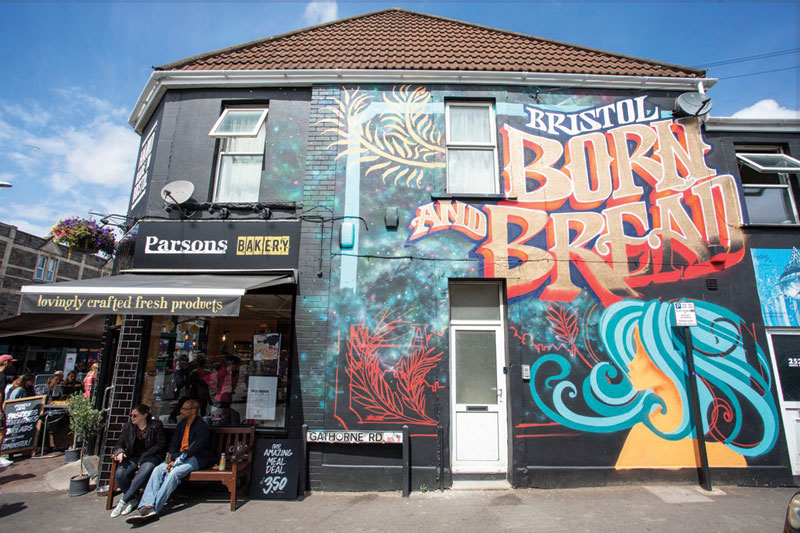 TRUE NORTH: Gathorne Road, joining onto the main artery, proudly sports an Inkie piece from an Upfest past (image by Paul Box)

North Street Nights – Southville’s late-night shopping and entertainment experience – is back for a second year this month, offering the chance to take in diverse BS3 after dark. Over 40 businesses are involved – purveyors of toys, tech, handmade delights, fresh fruit, veg and produce and plenty more – so you can fill your festive stockings knowing you’ve done your part to support this local high street and even enjoy some live theatre from Bristol company Show of Strength. They’ll be bringing anti-cheer champion Scrooge to life – along the retail route, pay a visit to Ebenezer Gate for a special festive interaction with the famously unfestive grouch.

“People live busy lives and it can be difficult to get out and do your Christmas shopping if you work nine-to-five,” says Bedminster BID chair Simon Dicken of the event. “It can be easy to fall into doing all your shopping online, but here you have the chance to get out into the high street with other shoppers and share the excitement of finding that perfect present.” As Simon says; “Bedminster has some of the most unique and exciting businesses and independent retailers and every pound spent with a local retailers stays in the area, so it’s vital we support, particularly during the festive season.”

Plus, there are a whole bunch of changes, new openings and upcoming events we want to shout about. *Clears throat…* 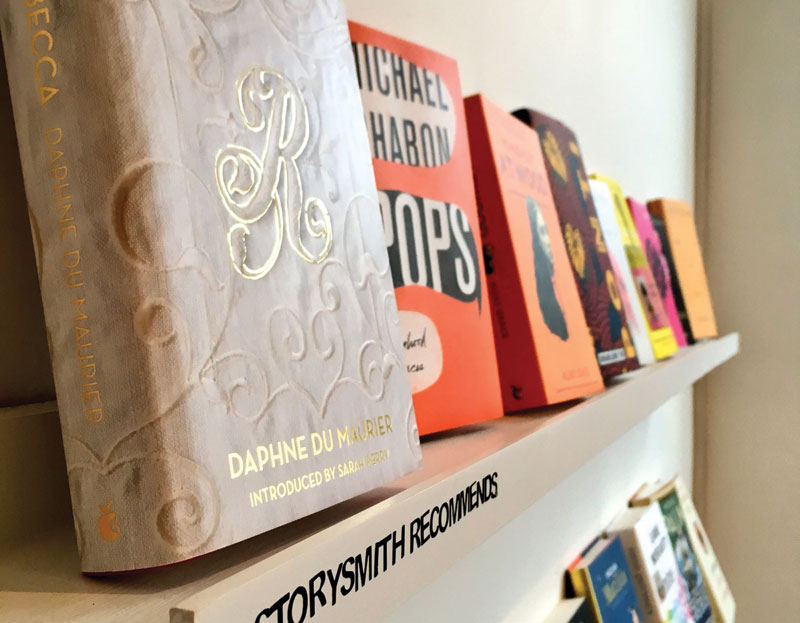 This has got to be one of our favourite North Street additions – first flagged up to us as a beautiful venue in which to to indulge in the trendy espresso martini, served up in gorgeous Jericho Studio Pottery which can be purchased afterwards if you fall in love with it – it’s only sold at Albatross. Recently we popped into the pastel and neon paradise for brunch – which it does unbelievably well. Think toasted banana bread with mascarpone and lemon curd; granola bowls packed with vibrant fruits; mustard and apple rarebit toasties. 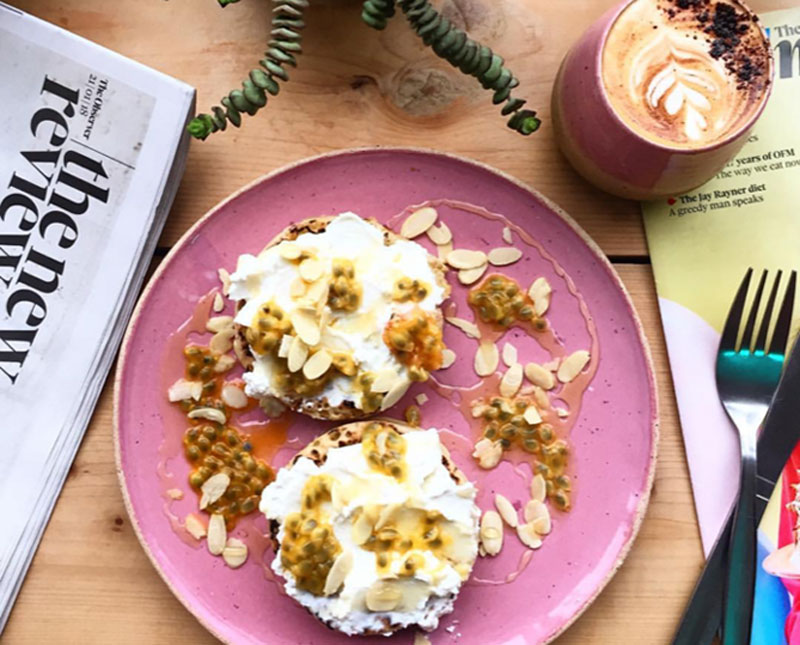 Formerly The Hare, number 51 relaunched as Leveret (satisfying fact: a leveret is a baby hare) in September after six years in its previous incarnation. Expect belgian beers, South West ciders, classic cocktails and more at this privately owned, dog-friendly taproom. The building has been in use as a public house for over 150 years and in its back room you’ll find photographs from the owner’s family photo albums, depicting happy Bedminster days from the 1930s to 1970s.

Tobacco Factory Theatres’ brand new second venue is a big development for its talented team as it means they can now welcome 30,000 audience members each year for an additional 360-plus performances. It’s now able to run five young theatre-maker groups each term and the Young Producer Scheme has increased from six to 10 places, running for the whole educational year rather than six months. The state-of-the-art new theatre also provides an engine room for artists to research, develop and share new ideas. See Sophie Hates Theatre on 1 December or puppet show Beasty Baby (6 December to 6 January) at the Spielman or The Borrowers (until 20 January) at Factory Theatre.

Contender for quirkiest newcomer, Trylla popped up fairly recently, selling gifts handmade on-site in the basement studio, retro toys, homeware, clothing and accessories; running knitting, macrame and clay clubs; and hosting small-scale workshops at the back of the shop. Trylla means ‘to enchant someone’ or ‘to turn someone or something into a troll’ according to owner Alice Astbury, a northern maker with an interest in illustration and ceramics. Her space can seat up to 12 people, and if you have an idea for a workshop you would like to see in the community or need a place to meet as a group, send Alice an email and she will see what she can do.

Slap-bang in the midst of this quick-developing creative quarter, North Gallery Workspace – brought to Bristol by cousins Lawrie Gunning and Lenny Chilcott, and their uncle Andrew Price – is a multipurpose new venture to be run by local artists of all ages and mediums. They’ll be renting walls (as well as hotdesking/co-working and evening class/event space) but won’t charge commission so all profits from work sold go to the artist. Anyone with a wall will be expected to muck in with the collective, doing a shift every week or so which will involve sitting in with the art for a couple of hours – sounds alright to us. There will be high-speed broadband, free tea and coffee, flexible desk rental – you can buy days to use as and when you like. Just down the road off East Street, meanwhile, another arts collective, Caraboo Projects, has moved into an abandoned building and transformed it into workshop space ‘The Works’. Launched in September, it is run by Gathering Voices as part of their Creative Outreach Programme.

Alright so this one is far from new but if you haven’t tried the food recently, you ought to, and that’s basically what we have to say here. We’re talking scorched mackerel with sauce gribiche, soused beetroot and confit fennel; beetroot risotto with goat’s curd and crispy sage (the best kind); and poached pear and frangipane with almond brittle and crème fraîche. Head to this beloved Bemmy boozer on a Tuesday evening and you might struggle to find a table as the popular quiz and bingo sesh get going for their weekly takeover. You’ll find all the fun here and, most likely, us – racking our brains in the general knowledge department (music intros are more our forte). This community pub has lots of local beers, some from Bristol Beer Factory just over the road. It’s quite possibly the cosiest watering hole on the strip, of a winter’s evening when the fires are roaring, and Sundays see the place packed out for the roast dinner offering – well worth booking in advance.

Newly launched at Zara’s new space just a few doors down the road from her old gaff, North Street’s hot chocolate bar also hosts fab workshops these days (an experience voucher would definitely be a Christmas present we wouldn’t turn our noses up at). Recent ‘Choctober’ celebrations saw everything from tasty chocolate and cheese pairings to fact-filled chocolate and coffee tastings. Over the next year the team is aiming to switch all trade to come direct from growers so they get more money too. Catch Zara and co at the Chocolate Festival at the Southville Centre on 8 December. 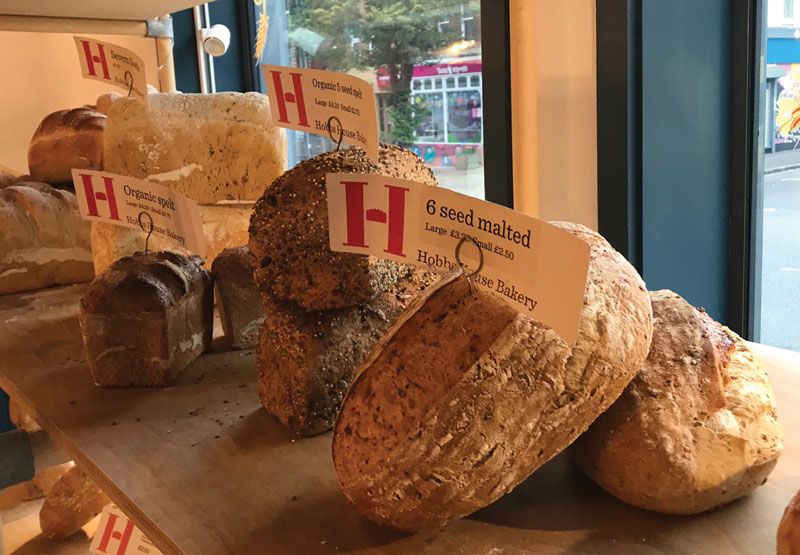 Have a sit down at Hobbs House

When this lovely neighbourhood record store moved up the road and reopened – sandwiched between The Old Bookshop and what was The Old Butchers – it quickly settled into its new space. Soon enough the decision was made to transform the Butchers into a bar and live music space – launched late November – for Friendly Records and its loyal following. Darran McLane (formerly of Clifton’s Dustbowl Vintage) is bringing men’s fashion brand Weft Clothing’s to the space on 8 & 9 December – expect 1950s workwear and military garments.

It’s not just shops and arts facilities that have been drawn to the street lately. A new community nursery has been installed to cater for up to 90 children in its unique, central setting – with locally sourced organic meals and a simple, affordable approach. The nursery is committed to reducing carbon footprint and ensuring it makes a healthy contribution to the locale as well as providing a healthy start in life for the children who attend. All meals will be produced on North Street using ethically sourced organic ingredients.

With clients including Bristol’s Icon Films, Aardman and Luke Jerram, Photographique was launched with the objective of creating a lab with photography at its heart, embracing latest tech but passionately advocating film photography. It has the latest C-type chemical photographic printer alongside a large format giclée printer, and processes all film formats – 35mm, 120mm, more obscure 110mm and 127mm formats. The team work with Velocious cycle couriers so you can drop your film orders into their dropboxes (at Society Café and Rough Trade) and they’ll be hand-delivered to the lab. They also recently launched Photo Club Bristol (Instagram: @photoclubbristol) as a celebration of film photography. 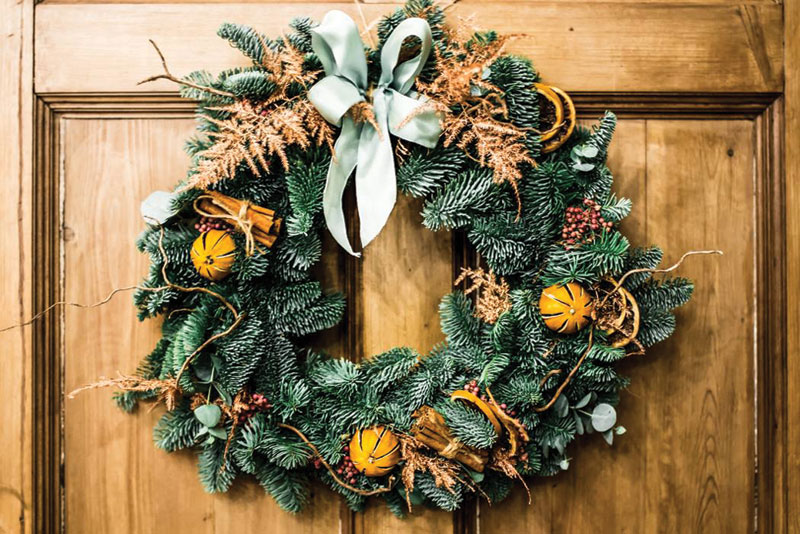 This studio – also home to professional upholstery service In Recovery Upholstery – opened a new workshop space a few months back and now offers six-week dressmaking or upholstery courses and stained glass or pattern-cutting classes. You can also try other crafts including furniture making and visual arts, taught by welcoming, experienced working professionals in their fields. The space can be hired by local creative professionals too. ■