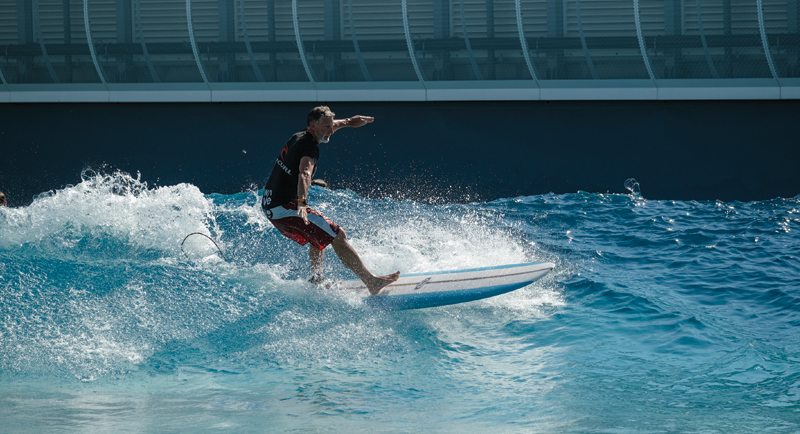 When pain prevents you from doing the activities you love, it’s a sign you should seek medical advice. For an amateur surfer from Almondsbury, this was his motivation to undergo hip surgery at Nuffield Health Bristol Hospital, and nine months later, he’s back on his surfboard.

When Nick Meads, 56, first began experiencing severe back pain a few years ago, he initially assumed – as many of us would – that he simply had a bad back. Father-of-three Nick is a keen sportsman, who enjoys surfing and competing in triathlons, but the constant pain meant that he was no longer able to take part without painkillers. He was struggling to walk, he wasn’t sleeping, and over the course of around five years, his pain got progressively worse. As Nick says, “I just got fed up, because I couldn’t do anything I loved doing.”

Last summer, during a family holiday to Portugal, Nick was finally convinced that something needed to be done. He says: “I was running about on the beach with the kids and felt crippled. They’re older now, so were just giving me grief, but my wife, Charlotte, who’s a physiotherapist, saw the pain I was in and told me I couldn’t go on like that. I also spoke to my brother, who’d recently had a hip operation. We were comparing notes about our pain, and everything he described matched what I had.”

It was at that point Nick realised it perhaps wasn’t his back that was the problem, but rather an issue with his hip.

Nick booked an appointment to see Mr Stephen Eastaugh-Waring, a Consultant Orthopaedic Surgeon at Nuffield Health Bristol Hospital, whose specialties include the treatment of sports-related hip conditions. During their consultation, the benefits of both a hip replacement and hip resurfacing surgery were discussed, and due to Nick’s love of extreme sports, it was decided that hip resurfacing would be the better option.

Hip resurfacing is a relatively new procedure for treating hip pain and hip osteoarthritis that, as the name implies, provides a new surface for the ball and socket that make up the hip joint. During surgery, the damaged surfaces of the femur head (ball of the thighbone) and the acetabulum (socket in your pelvis) are reshaped and replaced with a cover.

Mr Eastaugh-Waring explains: “Hip resurfacing has been popularised by Andy Murray, but it isn’t suitable for everyone. According to the National Joint Registry, younger and middle-aged, active males are the particular patient group who do best with this procedure, and because Nick is a very keen surfer, he benefits from the large bearing size which helps prevent dislocation.”

Nick had his surgery last November, and describes himself as “gob-smacked” by how quickly he felt the difference. “Compared to what it was like before, I was completely pain-free,” he says. “Going down the stairs was just a joy, and within two weeks I was walking without needing to use crutches.

“Having hip surgery was a bit scary, but the hospital team were brilliant, and very reassuring. Mr Eastaugh-Waring was absolutely fantastic, the physios I saw were excellent, and the nurses were amazing.”

After three months, Nick was able to take what he calls “some good walks” with the family’s pet dog, and at six months, when he’d been advised by Mr Eastaugh-Waring that he would be able to do a bit more exercise, he cycled 110 miles. “It’s as if I’ve never had a bad hip,” he says. Obviously wanting to get back to surfing, Nick also booked some sessions at The Wave, the inland-surfing destination just outside Bristol. He explains, “I can focus on pushing myself a lot harder, which is great, and also, rather than being a ‘mediocre dad’ at surfing and other sports, I can start kicking my sons’ butts. They were taking the Mick before, saying they could easily catch up with me, but now, I can start challenging them again – even at my ripe old age!”

If you’ve been experiencing any form of joint pain and would like to book an appointment with a Consultant Orthopaedic Surgeon at Nuffield Health Bristol Hospital, call 0117 911 5339, or visit our website: nuffieldhealth.com/hospitals/bristol.