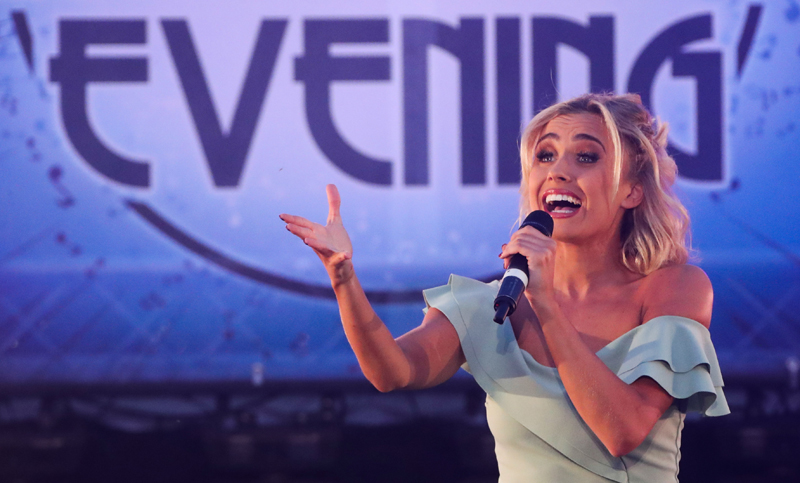 One Enchanted Evening at Glastonbury Abbey

On Sunday (30 August), some of the biggest names from the worlds of theatre and music joined forces in a unique collaboration to bring the performing arts out of lockdown.

On this bank holiday weekend, a weekend which would have normally been filled with festival events at Glastonbury Abbey, some of the county – and country’s – very best talent took to the stage for a two-hour West End-style show to raise money for the NHS and health charities that have sacrificed themselves to help the local community during the pandemic.

Over the past five months, performers, singers and dancers have faced difficult times as theatres remain closed and festival dates continue to be rescheduled for the new year. Welcomed with open arms by over 600 artists, however, the One Enchanted Evening event allowed the arts to return to the stage.

One Enchanted Evening was the brainchild of West End choreographer and director Andrew Wright, who hails from Street. He was generously joined by Glastonbury Festival founder Michael Eavis and worldwide theatre producer Sir Cameron Mackintosh, who both live in the county, to put on a show-stopping event.

Wright recruited the likes of BBC Casualty’s Evelyn Hoskins, BBC Proms West Side Story’s Jess Michelmore and Joseph and the Amazing Technicolour Dreamcoat’s Jacob Fisher to perform the big numbers from some of the world’s most famous musicals, with the event hosted by Jane Milligan.

Georgia Lennon, singing ‘The Hills Are Alive’ from The Sound of Music, made a magnificent entrance, walking across the sun-lit ruins to the orchestra, who sat in the main marquee in the centre of the grounds. From then, audiences enjoyed hits from Hairspray, Mamma Mia, Mary Poppins, The Lion King and Les Misérables – all brought to life using masks, puppets and striking costumes.

“2020 has seen an unprecedented situation in the history of theatre, leading to nearly all creative industries across the globe being shut down,” said Wright. “As a country we have lost a world-renowned asset. Audiences have been deprived in a way that none of them have known before. Musical theatre can lift spirits.

“While the government’s support has been welcomed, its advice on when the arts can restart has been slow to come, and we want to prove that if we can’t perform inside, we’ll take it outside to the masses instead, and what better place to do it than one of the most historic locations in the town that gave the world’s most famous music festival its name.

“Many might consider Somerset a sleepy, tucked away county in the South West, but we pack a punch when it comes to the arts. Whether it’s music, live performance or the creative arts, Somerset should be firmly placed on the map of places to come to see some of the UK’s best talent.”

Sir Cameron described the event as a “spectacular evening to celebrate how much we are missing musical theatre”. Sunday night’s performance demonstrated that the lockdown won’t stop the arts from staying alive, and proved that with just a few weeks of preparation, the dedicated performers, who were eager to return, can still provide a world-class night of music and dance.

“So it’s so marvellous that Janet Bell, the director at the Abbey has been able to gain the support of Sir Cameron Mackintosh and Andrew Wright from the theatre world to help put on a wonderful selection of songs from his shows as well as many others. What a treat for what we’re calling One Enchanted Evening in the most romantic of settings.”

With many local organisations offering their products and services for free – including Sir Cameron Mackintosh, who allowed his songs to be used for free – 700 tickets snapped up by those missing the thrill of a live performance.

Groups including League of Friends at Musgrove Park Hospital, Taunton and Friends of Yeovil District Hospital, which have both treated Covid-19 patients, and Somerset Community Foundation which has made grants to charities and food banks, will all receive support thanks to the directors, organisers and performers of One Enchanted Evening.

And as Milligan closed the show with the final words “we will be back soon” – we can’t wait to see the theatre doors reopen.

Next
900MB broadband at 50,000 homes in the city
Start typing to see results or hit ESC to close
bristol gender film tv history
See all results