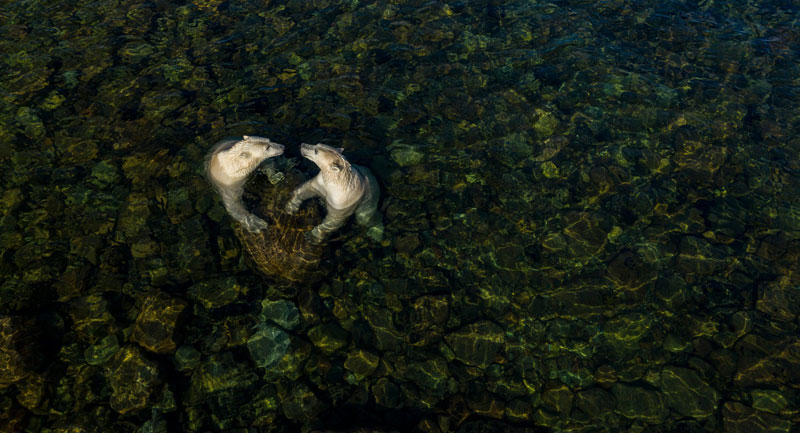 One World: Wildlife Photographer of the Year

The Wildlife Photographer of the Year exhibition – the most prestigious photography event of its kind – has officially opened at M Shed. Here, we delve into some of the winners’ exceptional images, which showcase the breath-taking diversity of the natural world.

The world-renowned Wildlife Photographer of the Year exhibition, now in its 57th year, has officially opened
at M Shed. On loan from the Natural History Museum in London, Wildlife Photographer of the Year – the most prestigious photography event of its kind – showcases exceptional images of animal behaviour, spectacular species, and the breath-taking diversity of the natural world.

This year’s competition saw a record-breaking number of entries from professional and amateur photographers from 95 countries. Each entry was judged anonymously on its creativity, originality, and technical excellence by an international panel of industry experts.

Wildlife Photographer of the Year was launched in 1965. In its first year it attracted 361 entries, today the competition receives over 50,000 submissions from all over the world. This year’s award-winning images will be displayed at M Shed until 5 June before embarking on an international tour. Here, we delve into some of the winners’ work…

A young Iberian lynx pauses in the doorway of the abandoned hayloft where it was raised, on a farm in eastern Sierra Morena, Spain. He will soon be leaving his mother’s territory. Once widespread on the Iberian Peninsula of Spain and Portugal, by 2002 there were fewer than 100 lynx in Spain and none in Portugal. Their decline was driven by hunting, killing by farmers, habitat loss and loss of prey (they eat mainly rabbits). Thanks to ongoing conservation efforts – reintroduction, rewilding, prey boosting and the creation of natural corridors and tunnels – Iberian lynx have escaped extinction and, though still endangered, are fully protected. Only recently, with numbers increasing, have they begun to take advantage of human environment.

Lasse Kurkela watches a Siberian jay fly to the top of a spruce tree to stash its food. Lasse wanted to give a sense of scale in his photograph of the Siberian jay, tiny among the old-growth spruce-dominated forest. He used pieces of cheese to get the jays accustomed to his remotely controlled camera and to encourage them along a particular flight path. Siberian jays use old trees as larders. Their sticky saliva helps them glue food such as seeds, berries, small rodents and insects high up in the holes and crevices of the bark and among hanging lichens.

Brent Stirton’s photographs document the work of the Lwiro Primate Rehabilitation Centre, which rescues and rehabilitates primates orphaned by poaching. Many staff here are survivors of military conflict in the Democratic Republic of the Congo. Working at the centre helps with their own recovery. The director of the centre sits with a newly rescued chimp as she slowly introduces it to the others. Young chimps are given one-to-one care to ease their psychological and physical trauma. These chimps are lucky. Less than one in ten are rescued after having seen the adults in their group killed for meat. Most have experienced starvation and suffering.

Martin Gregus spent three weeks on his boat using various techniques to photograph polar bears around Hudson Bay, Canada. Coming ashore in summer, they live mainly off their fat reserves and, with less pressure to find food, become much more sociable. While not wanting to detract from their plight in the face of climate change, Martin wanted to show polar bears in a different light. On a hot summer’s day, two female polar bears took to the shallow intertidal waters to cool off and play. Martin used a drone to capture this moment. For him, the heart shape symbolises the apparent sibling affection between them and “the love we as people owe to the natural world.”

Stefano Unterthiner watches two Svalbard reindeer battle for control of a harem. Stefano followed these reindeer during the rutting season. Watching the fight, he felt immersed in “the smell, the noise, the fatigue and the pain.” The reindeer clashed antlers until the dominant male (left) chased its rival away, securing the opportunity to breed. Reindeer are widespread around the Arctic, but this subspecies occurs only in Svalbard. Populations are affected by climate change, where increased rainfall can freeze on the ground, preventing access to plants that would otherwise sit under soft snow.

Majed Ali glimpses the moment a mountain gorilla closes its eyes in the rain. Majed trekked for four hours to meet Kibande, an almost 40-year-old mountain gorilla living in Uganda. “The more we climbed, the hotter and more humid it got,” Majed recalls. As cooling rain began to fall, Kibande remained in the open, seeming to enjoy the shower.

Wildlife Photographer of the Year is developed and produced by the Natural History Museum, London. The exhibition will be on display at M Shed until 5 June 2022. Book tickets at: bristolmuseums.org.uk

Previous
Deck Your Halls: expert tips on how to dress your home for Christmas

Next
Beyond the Dreams: an interview with the cast of Dreamgirls the musical
Start typing to see results or hit ESC to close
bristol gender film tv history
See all results