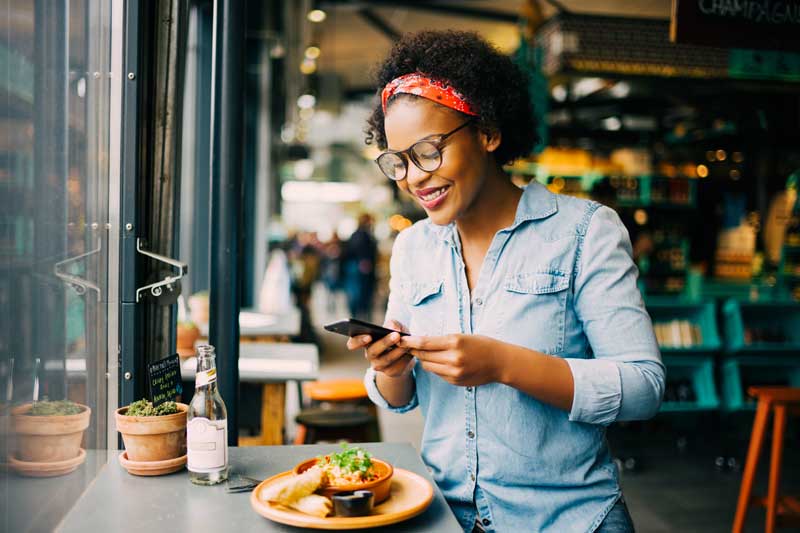 Has she been stood up by her date? Is he a bit weird? That woman looks really nice; why hasn’t she got any friends? On and on it goes: the constant justification, speculation and, occasionally, character assassination of the unaccompanied diner in our midst.

Calm down! It’s just a person eating out alone, not some sinister/tragic drama unfolding before you. She hasn’t been stood up; she’s worked late, is meeting friends in an hour and doesn’t want to sink three glasses of wine on an empty stomach. The guy on his own is a college lecturer enjoying a post-class repast. The woman who ‘looks really nice’ is a restaurant critic just doing her job – and far from lonely.

I take myself for lunch, dinner or a glass of fizz on a regular basis; it’s something I actively make time to do when life gets a bit stressy, and see it as a bit of a treat along the lines of sinking into an indulgent bubble bath or settling down for an evening by the fire with a good book. But if you’ve never done it, consider this: you can eat exactly what you feel like eating without the risk of food envy, peer pressure or obligation to share. It’s a heightened sensory experience, too; without small talk (or big conversations) to distract you, you’re more likely to focus on the food on your plate, and the general atmosphere of the environment around you – oh, and there aren’t any awkward moments regarding who pays the bill when you’re ready to leave, either. You don’t have to be single to do it, nor should the solo dining occasion have to be work-related… Although the latter situation in particular tends to be the time when most people ‘justify’ their table for one.

“My job demands that I travel a lot,” says Ellen, a Bristol-based freelance HR consultant. “I used to spend evenings away from home ordering hotel room service, or I’d grab a selection of ready-to-eat food at the nearest supermarket. Then one day, I found myself in a really lovely hotel, with a really lovely restaurant attached. On check-in, the receptionist asked if I’d like a dinner reservation for that evening and I thought, why not? I had the most lovely experience: great food, a relaxed environment – at last, I felt like a proper grown up! I take myself out for a meal quite a lot now, even when I’m not travelling, and even though I’m married; just because you find yourself out and about on your own at lunch or dinnertime, it doesn’t mean you have to eat a ready-made sandwich on a park bench.”

“But what do you do when you’re on your own at a restaurant table?” a friend asked, when I told him I was writing this feature. “What do you mean, do? I’m already doing something!” I replied. But if you, too, feel the need to do something else other than eat and spy on awkward dates – sorry, I mean people-watch – you are, of course, never alone with your phone.

The manager of one Bristol restaurant told me that around 90% of solo diners spend the entire duration of their meal on their phones, talking, texting, or catching up on emails, social media and news.

Naturally, now that we can take our office (or indeed, our social life) with us wherever we go, why not use a restaurant table as a temporary office? Similarly, a book or a magazine can be equally engaging company. Personally, I prefer to sit back, chill out and keep an eye on the social brouhaha surrounding me. But however you choose to spend your me-time, it’s important that you don’t automatically put yourself (or allow yourself to be put) in ‘second-class citizen’ mode the moment you step through the door.

Despite the fact that tables for one represent around 12% of early dining trade in most restaurants on any given week, front-of-house staff at certain establishments still haven’t got with the programme, automatically reaching for two menus as they bustle you along to your table, and replying, “Oh, just one? Yes of course, that’s fine, really it is” a little bit over-enthusiastically when you make your solo status clear. Okay, having just one diner taking up a table that could easily seat four can be frustrating for a restaurant owner, but rarely is business so busy that there’s a hungry, braying crowd waiting for a singleton to clear their plate. So, don’t be pressured into taking a seat at a tiny, chilly table wedged between the men’s loo and the air conditioning generator just because you’re on your own.

A long, long time ago – before I was less confident than I am now (and eating out alone does, I guess, require a certain amount of confidence) and before my job as a restaurant critic taught me more about how a restaurant ‘works’, solo me was seated in the equivalent of dining room Siberia on many occasions, regardless of how busy the restaurant was. These days, I’m far more likely to ask the restaurant (politely, of course!) why they keep such a badly-located table laid up than I am to actually sit at it. Fortunately, however, attitudes towards solo diners are a-changin’.

“I really like it when people feel comfortable enough to eat with us on their own,” says Sarah, a waitress at one of Bristol’s hottest harbourside restaurant-bars. “When somebody comes in on their own, I never, ever assume that they’re meeting somebody else, or waiting for a friend to turn up, and I make sure they feel as welcome and relaxed as I want everybody else to feel.”

So: go for a corner table if you’re in a quiet mood, opt for buzzy if you fancy a spot of people-watching. Bear in mind, though, that the people you’re watching aren’t necessarily watching you, despite the fact that, the first time you eat out alone, you may feel as though everybody around you is wondering why you’re doing it.

A few years ago, Thomas Gilovich – professor of psychology at New York’s Cornell University – conducted a study into the psychological phenomenon he called the ‘spotlight effect’, which occurs when people tend to believe they’re more noticed than they actually are. Gilovich recruited a group of students to walk through and generally hang around in a highly populated public area alone, wearing a Barry Manilow t-shirt (the most mortifying anti-fashion statement the students could think of, at the time.) Over half of the t-shirt wearers were convinced that the nearly all the people around them had (a) noticed them walking around on their own, and (b) made negative judgements regarding what they were wearing. In fact, less than a quarter of the people around them had even noticed the single person’s presence, let alone their t-shirt.

“Because we’re so focused on our own behaviour, it can be difficult to arrive at an accurate assessment of how much – or how little – of our behaviour is noticed by others,” Gilovich concluded. In other words, we’re just not that important; unless you enter a restaurant or bar solo and naked, or wearing a clown suit, or carrying a kangaroo over your shoulder, the vast majority of the people around you won’t even notice you’re there. You, however, will have a lovely time, in excellent company.

Table for one? Do it today.

Previous
Wild Bristol: On with the glow(worms)

Next
Rugby: We are the champions
Start typing to see results or hit ESC to close
bristol gender film tv history
See all results