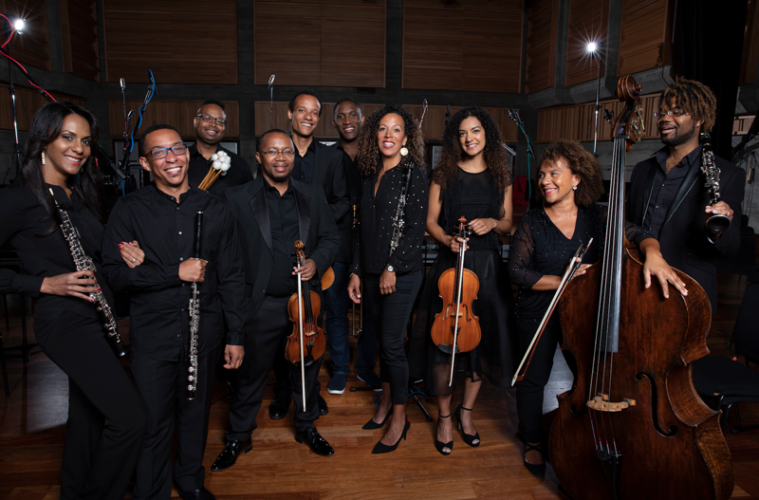 Chineke! is the first professional orchestra in Europe made up of primarily black and minority ethnic musicians. EMMA CLEGG talks to founder Chi-chi Nwanoku about how it was conceived and why its aim is to champion change and celebrate diversity in classical music

Chi-chi Nwanoku grew up in Kent and Berkshire, where she was the only black person in her year at school. “White was my world; my mother was white and my father was black,” she remembers. “I didn’t even question it.” Chi-chi trained as a 100-metre sprinter, eventually competing at national level, but her running career ended abruptly after a knee injury when she was 18, which is when she took up the double bass. Her A-level tutors could see Chi-chi was an excellent musician and told her that they thought she could have a musical career if she took up an unpopular instrument.

“They shoved the double bass in my hand, which I was alarmed at because I was five foot nothing, but it was love at first sight. And so I was propelled into a completely white world and I barely thought about it,” she says.
Chi-chi studied at the Royal Academy of Music and then with double bass soloist and teacher Franco Petracchi in Rome. She soon found herself in demand internationally and forged a successful career as a player and soloist. On top of many musical accolades over 30 years, she was awarded the MBE in the 2001 Queen’s birthday honours and the OBE for services to music in 2017.

On 14 September 2014 Chi-chi was going to a concert at the Royal Festival Hall, given by the Kinshasa Symphony Orchestra – a self-taught orchestra from Congo who were celebrating their 10th anniversary. On her way there she met Ed Vaizey, the culture minister at the time, who invited her to the pre-concert reception he was heading to. Chi-chi knew Ed Vaizey well – indeed he had on previous occasions asked her why it was only her, as a black musician, that was seen regularly on the international concert platform. When they arrived at the reception, there was a BBC interview taking place on the other side of the room with a white violin soloist – part of a documentary the BBC were making about the Kinshasha Symphony Orchestra.

Chi-chi and Ed were welcomed by Gillian Moore, the director of music at the South Bank, who was horrified that Chi-chi hadn’t been invited. She was also apologetic about the interview taking place. “What does she [the white violinist] know about Africa?” asked Gillian. Chi-chi remembers that moment clearly, with Ed Vaizey by her side, at the pre-concert reception: “That was when I had this out-of-body experience when everything went quiet around my head. It was like I used to feel at the start of 100 metres when all I could hear was the starters orders. I went into this other headspace and I could not hear anything around me.

“I said very calmly, ‘We are used to this. You’ve been telling our story for centuries.’ If you can picture the room – this fancy reception for the Kinshasha Orchestra concert, the BBC interviewing people, not a black face in the room, apart from the one who hadn’t even been invited. So it was laughable because I became the elephant in the room and I popped the bubble.”

Chi-chi remembers the concert: “They played Beethoven and Berlioz and then a couple of pieces from their own country where the white people had to leave the stage. It was just beautiful.” As she walked back towards Waterloo Station after the concert, she remembers clearly saying to herself, “I have to do something about this. It feels completely wrong that there were looks of incredulity from the audience that there was more than one black person playing Beethoven. Playing it brilliantly. Why should that be? Where is everyone?” There wasn’t a single black colleague there, none of the black people who had mentored me. The penny dropped big time.

I had something very important to do. And I thought it was meant to be that Ed Vaizey was the one I bumped into on the way to this concert; it was meant to be that he was standing right next to me when this lightbulb moment happened at the reception. “The next morning I was on the phone to every music establishment in the country, every college, every conservatoire, the British Council, the government, the South Bank centre, the Barbican. They all knew me and they received the idea really well and asked me to come in for a meeting. It was then that I realised I had a voice, and a duty to use it.”

In this way the Chineke! Foundation was born (Chineke means ‘the creator of good things’ in Igbo). The next stage was to find an orchestra of black, minority and ethnic (BME) musicians to, literally, play out the music-for-everyone philosophy. “I researched everywhere, talking to friends of mine who are soloists with other orchestras – I had to find people one by one. I went underground, almost like a detective.” Chi-chi resolved that the new orchestra would not be London-centric, because the issue was global. She also invited a few people from Europe and then from America and South Africa. “I went and looked for them and I found them,” she says.

Chi-chi collected together 62 musicians for an orchestra and raised money to fund three days of rehearsal before their first concert. While all the musicians were highly trained in classical music, they had never performed together and didn’t know each other. Anxious about this, Chi-chi decided to call another two days of rehearsal but because she had no extra budget, she asked people to come of their own goodwill to the two extra days if they could. 35 to 40 musicians arrived on the first day and 40 to 45 on the second.

“I could sense the feeling from everybody that it was more important to be there than count the pennies,” says Chi-chi. “I realised that perceptions would be changed when we walked on stage and performed at the highest level. And you have to change perceptions in order to get systematic change. We were creating a pathway.”

The Chineke! Orchestra performed first in the Queen Elizabeth Hall in 2015 and then at the Royal Festival Hall in 2016, but since 2017 they have been in constant demand, performing concerts and giving community workshops virtually every month.

Chi-chi explains how the world of classical music still embraces the familiar white middle-­­­­­class stereotype and has been behind in welcoming in new faces. “This part of the arts industry is very under-represented at a time when we live in possibly the most diverse time in history. There is developing diversity in most industries but not in the classical music industry of creative arts. Classical music is thought of as high art, western art, and we are all well aware of the inhuman international practices at the start of it that funded the west.”

The role of education in music is another frustration for Chi-chi: “Since I was a child, music has been slowly and systematically removed from state schools, which is where there is generally a higher amount of ethnic diversity. I also think families of different ethnicities don’t necessarily encourage their children to go into classical music for a profession because they don’t see it as something that will provide economic security.”

Another focus has been the exploration of different and forgotten musical pieces. “From day one we’ve been exploring work by composers who have been written out of history, literally. So the likes of Samuel Coleridge-Taylor, Florence Price, Chevalier de St Georges and Ignatius Sancho, whose work can stand alongside Beethoven and Elgar. It’s something that we are committed to. We are educating the next generation, industry and our audiences. We are shining a light not just on ourselves but on more repertoire, we are expanding the repertoire because the great canon is very stuck.”

The philosophy of Chineke! is simple: sharing the joy of music and breaking down conventional barriers. As Chi-chi says; “All I want to do is go out there and share the wonderful world of music. And advocate music education for every single child regardless of background, ethnicity and wealth. Because it’s so good for you to learn an instrument.”

Image by Eric Richmond. See Chineke! at St George’s Bristol on 17 May.