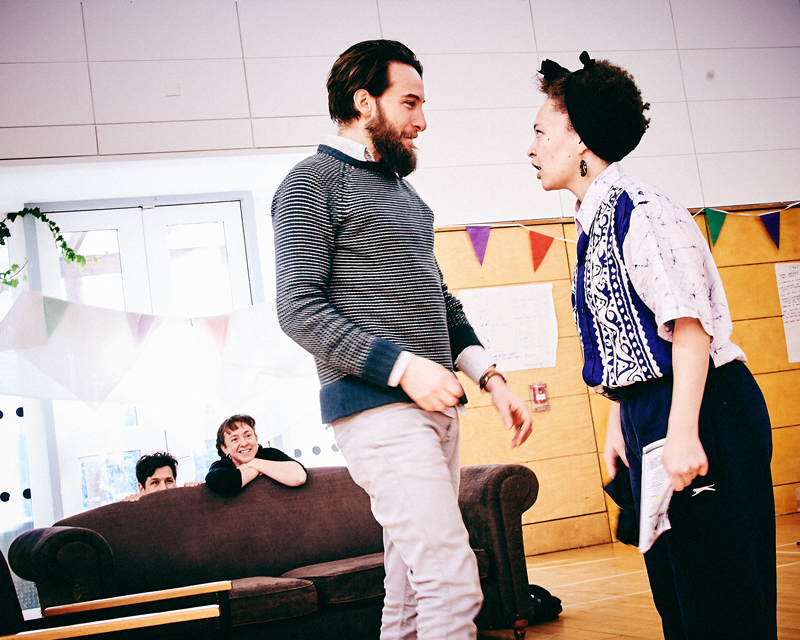 Despite being set in an 1780s penal colony, Timberlake Wertenbaker’s award-winning play Our Country’s Good is as pertinent now as ever through its exploration of the use of theatre as a rehabilitation tool for prisoners. Now Tobacco Factory Theatres opens a new adaption this month under the direction of Anna Girvan

The upcoming production of Tobacco Factory Theatres’ second Factory Company season takes us far away from the hustle and bustle of Southville to the harsh shores of late 18th-century Sydney, Australia, this month. Based on the true story of the first European convict colony established in 1788, Timberlake Wertenbaker’s Olivier winner Our Country’s Good addresses ideas around morality and crime. The story follows Young Second Lieutenant Ralph Clark as he is ordered by his superior to stage a production of George Farquhar’s The Recruiting Officer with the inmates as the actors. As they begin rehearsals, the prisoners and officers explore the notions of class, imprisonment, art and culture, and rehabilitation.

First staged in 1988 at the Royal Court Theatre, London, many of the characters are based on real people who sailed with the First Fleet from Portsmouth to land at the penal colony almost 250 years ago. Under the direction of Anna Girvan, the Factory Company is bringing Wertenbaker’s pertinent production to Bristol, so we caught up with Anna to find out more…

What was it about Timberlake Wertenbaker’s work that made you want to be involved in this production?

It’s a play that I have been interested in for a few years. I remember reading scenes from it at school but never quite receiving the full impact of the play. I have been involved with community groups in the past who have never encountered theatre making and have seen the power it has to give a purpose, focus and escape to those involved, and Timberlake so wonderfully captures that experience.

How does Our Country’s Good address ideas around crime, punishment and the judicial system?

The play, written in 1988 but set in 1788, highlights how some people within the system still believe the punishment of having your home, freedom, family and friends taken away from you isn’t enough, but that you should be continued to be beaten down, dehumanised and stripped of any dignity.

As part of our research we were fortunate to go into HMP Dartmoor and meet with inmates who are involved in theatre within prison. To hear how very little has changed in 30, or even 230 years, was shocking and saddening. One particularly poignant statement from one of the inmates recalls how he was constantly reminded in prison that he was just a number.

How do you think the play will resonate with modern audiences in regards to ideas around incarceration and rehabilitation?

I hope that our approach will not only keep the voice of these current inmates alive but also encourage those who watch it to take some action in regards to making our government prioritise the state of our prison system. MP Rory Stewart is bringing many issues regarding safety within prisons to the attention of the media and society, which vitally needs addressing. But also the rehabilitation of prisoners, so that they don’t reoffend, feels vastly underfunded. The life skills that theatre can bring to a group of people who have probably never felt any self-worth or sense of community, and help them come together to make something as exposing and risky as live performance, can only be a life changing and profound experience.

How does the concept of class impact on the fate of the characters? Is this something that modern audiences could relate to?

Timberlake serves up some wonderful philosophical arguments through Governor Arthur Phillip. When talking about theatre he says: “We learned to love such things because they were offered to us when we are children or young men. Surely no one is born naturally cultured?” This is something that really resonates today in regards to who has ownership over theatre and culture. We can say it is for everyone, but unless it is available, accessible and affordable, is it really? I think that though there are more people discussing the need to open up the arts we still have a battle to strip back the perceived middle and upper-class ownership of them and make them essential rather than a luxury.

…Surely no one is born naturally cultured? This is something that really resonates today in regards to who has ownership over theatre and culture…

There are a lot of characters in this play. Is this difficult for you as director, especially as the majority of the actors are playing multiple parts? Or is it more fun?

We have such a wonderful company of actors who have been working together already on A Midsummer Night’s Dream [the first production of the Factory Company season, on until 6 April]. As that play also involved multiple roles, they were more than ready and capable to jump into another play with similar demands. I love seeing the versatility of actors within one production and this whole play lends itself to that convention. The play makes so many comments about how audiences at a theatre need to use their imagination, and also picks up on opinions that women can’t play men. It’s great to watch us either break those conventions or play with them.

The Factory Theatre is an intimate performance space. How do you think this will impact on the play’s difficult subjects?

I love the intimacy of the Factory Theatre. Sitting and seeing the reactions of those around you makes you aware of the voyeuristic nature of the theatre and hopefully means that instead of just escaping into a moment, you can reflect upon what is happening and maybe form opinions rather than being simply emotionally led. It has always felt like a politically charged space for me as its roots are in a building that is not a traditional theatre space.

Our Country’s Good is based on one of the first convict colonies in Australia in the 1780s. What can we expect from the set/costumes?

I have never seen any productions of Our Country’s Good, which feels important as I have no other experiences of it to muddy my vision. In researching past productions, there seems to be a leaning towards a very traditional red-coated officer, ragged convicts and lots of elaborate scene changes.

On reading the play I actually found that there was nothing specific about what costume people should be wearing and, though some scenes specifically locate the actors in a space such as the hold of a ship or a rowing boat, Wertenbaker doesn’t litter the text with stage directions. I always find this very liberating as is means that we know what is there is most important. We wanted to draw on the artifice of theatre, as Wertenbaker does in the scenes between the convicts making the play, and also draw from our experiences of hearing of prisoners creating theatre with limited resources.

Can you tell us a little about your background in Bristol and what it is like bringing this production to a city that you have such a strong association with?

I trained as a director at Bristol Old Vic Theatre School from 2009-10 and lived in the city for another five years after graduating.
I had only ever briefly visited Bristol before moving here and I quite quickly fell in love with the city. To afford to do the course at the Theatre School I worked a bar job in the Tobacco Factory Café Bar and then moved upstairs to work as a duty front-of-house manager at Tobacco Factory Theatres. It was such a wonderful opportunity to see so many tremendous shows – shows that I know will stay with me for many years.

To be offered the opportunity to come back after a few years out of Bristol and direct a show in a space that is so close to my heart was, quite honestly, overwhelming. I wanted to create something that the audiences at Tobacco Factory Theatres would be entertained, challenged and excited by. It feels daunting taking on such a play, treasured by so many, but I really can’t imagine a more wonderfully supportive building and team to be working with on this project.

What has it been like working with the second Factory Company cast and creatives?

I’d never experienced watching my company of actors perform together before going into rehearsals with them, so getting to see them work their magic in A Midsummer Night’s Dream and then being the new kid on the first day of Our Country’s Good rehearsals was odd but wonderful. Such bonds have formed between this company already and I felt very honoured to be so warmly welcomed into their pack.

You are holding a directors’ lab on 26 April. What will this entail?

I will talk a little about the stages of development in making the play, the relationship with a designer etc, and we will practically explore some different techniques in working with actors playing multiple roles and some other tools for creating a collective world for the actors. We’ll also touch on how you can use research when working on a play which has such rich real-life stories and hopefully give some insight into the day-to-day life of our rehearsal room.

Our Country’s Good is on at Tobacco Factory Theatres from 17 April – 11 May. Tickets from £12; tobaccofactorytheatres.com

Featured image: Members of the Factory Company in rehearsals