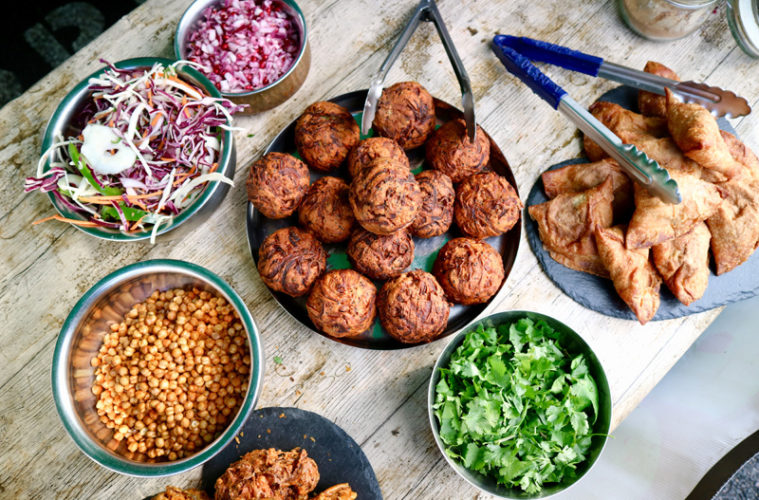 We’re told that Bristol’s concentration of vegan-related searches on Google surpasses every other city in the world. Melissa Blease takes a closer look at varied offering across a few of its many quality hotspots

According to Livekindly (livekindly.co) – the community-based media conglomerate focused on sustainable and compassionate living – it’s estimated that the number of vegans living in the UK soared to 3.5million in 2018, up a whopping 700% on the previous year. And which UK city earned 100% in the vegan popularity score and first place in the European ranking? Bristol! To celebrate the city’s title as vegan capital of the UK, we took a whistlestop tour of the liveliest, most vibrant plant-based hotspots on our doorsteps.

Lifelong vegetarian and recent vegan convert Sophie Fox (who has spent the last eight years running Café Create at The Create Centre in Hotwells) has a new venture set to open on North Street any moment now. A dedicated vegan deli and café, Flip is on track to offer a range of gorgeous, affordable vegan dishes including hearty pies, saucy pasta dishes, life-enhancing salads and much more, to eat in or take away. Sophie is collaborating with a carefully selected variety of small, local artisan food producers to bring an abundance of local loveliness to her menus, while all the packaging used in the plastic-free environment will either be fully compostable or reusable. Isn’t it lovely when new news is good news?

Until very recently, dirty burgers, filthy fries and fully-loaded sundaes were all tucked away on the guilty pleasures list that few foodies would admit to indulging in – and totally, utterly off-limits for those who preferred their guilty pleasures cruelty free. But oh, how times have changed! Today, it’s possible to take a 100% vegan route to the grubby fast-fix satiation that folk who give up meat think they have to give up, while diners, drive ins and dives are riding high on the destination dining charts. Case in point?

Oowee Vegan (Baldwin Street) specialises in clean-eating dirty burgers, gut-friendly, gut-busting fries and vegan versions of all the trimmings (fried ‘chicken’; plastic cheese; sweaty mayo; creamy shakes etc) that you’d expect to find in a classic downtown LA dive, served up in a small but perfectly formed (and, thankfully, super-clean) little Bristol diner. The ‘beef’ in the burgers is plant-based, the ‘chicken’ is made from seitan (washed wheat gluten) and the ‘cheese’ has had less contact with dairy than Gwyneth Paltrow’s children. In the mood for face-free filth? Look no further…

Those who speak fluent Persian will know that Koocha simply translates as ‘corner’ – and this little hub for non-stop exotic vegan scrumptiousness has totally transformed an otherwise prosaic little corner of Zetland Road. For owner Noda Marvani, Koocha represents an authentic taste of her Iranian heritage through dishes created using some of the oldest cooking techniques and flavour combinations in food history. The vibrant, colourful mezze-style menus are designed to be shared (mezze menus did, after all, provide the original foundation for the contemporary small plate ‘habit’) and waltz us through a selection that incorporates the familiar (falafel; hummus; tzatziki; chickpea and spinach stew) to tantalising lesser-spotted delights such as koopa, eggless kookoo and ghormeh sabzi. (Once you’ve discovered them, you won’t want a week to go by without tasting them again.) Breakfasts go large here from Friday to Sunday, and those of us with big appetites can binge on vegan doners, koftas and even a Bandari sub (a hot dog, no less). The cocktails, meanwhile, can only be described as heavenly…

The home-from-home experience: Eat Your Greens

Mismatched furniture, wild flowers in jam jars, books by local authors on the shelves. Big breakfasts to set you up for the day ahead; a bowl of something uplifting to pick you up at lunchtime; a home-cooked supper and a local cider to chill you out when the sun finally sets. A safe space for all, where everybody feels welcome. Are we actually at home? No – we’re eating our greens at Eat Your Greens, a properly friendly neighbourhood haven of plant-based delight on the Totterdown side of the Wells Road, where chef/proprietor Babs (previously responsible for legendary vegan pitstops Roll for the Soul and Café Kino) has created a totally unpretentious, charmingly affable daytime café/night-time bistro with menus that offer all things to all comers, where super-cosy comfort food (including amazing homemade cakes) snuggles up alongside inspirational attention-grabbers such as chipotle cashew cheese, seasonal roots in tempura or smoked carrot lox with almond cream cheese and black seaweed ‘caviar’. On the drinks front, local brews mingle happily with wonderful, well-priced wines, while local and ethical sourcing policies are writ large throughout Babs’ overall ethos at every turn. Eat Your Greens is, quite simply, just a lovely place to be.

Rebecca Du Plessis used to be a dedicated raver. These days, her fave rave revolves around healthy, wholesome, good times for body, mind, soul and planet – and her principles are showcased to their very best advantage at Beets ‘n’ Roots, the thoroughly chilled-out, super-welcoming, mellow sanctuary of good cheer on Cotham Hill. You could say that holistic health is in Rebecca’s blood; her mum established the UK’s first holistic health centre (The Natural Health Clinic) in the same neighbourhood back in 1981. Beets ‘n’ Roots complements, supports and perpetuates Rebecca’s heritage courtesy of vibrant, life-enhancing menus based around mega-nutritious, organic, plant-based goodness for all, whether you’re chilling out within (or outside, on the gorgeous little sunken sundeck) or opting for a dynamic treat to-go. Sourcing is meticulous, seasonality dictates to the selection on offer almost by the hour, and strict environmental and eco-friendly policies guarantee that this plastic- and waste-free zone is as good for our planet as it is for its inhabitants. If you want to take it one step further, its Roots Morocco retreat project launches this spring, in a rustic village hideaway near the port town of Essaouira, on the south-western coast of Morocco. Meticulously planned by Rebecca and her team out in Morocco, the Roots getaway combines the vibrant flavours of juicing with rejuvenating pursuits including yoga, meditation, surfing and walking.

You’re at a festival, you’ve got all your best mates in tow, you’re having the time of your life – and you’re starving. You come across a lovely, lively little hut serving lovely, lively, large portions of the kind of vibrant veggie victuals that make you feel as though summer will last forever. Think fresh, just-the-right-amount-of-spicy stuff such as moreish pakoras flecked with wild garlic; sweet potatoes and colourful peppers in dreamy, creamy coconut sauce; samosas drenched in a velvety tomato curry, topped with exotic date and tamarind chutney; onion bhaji Scotch eggs. Yes, really! Oh, if only festival food this good could be a year-round treat! Well actually, it can be if you jig your way along to Unit 2, Cargo 2 on Wapping Wharf, where you’ll find tiny little Gopal’s Curry Shack, the brainchild of bezzies Melanie Taylor and Heather Simmonds, who first collaborated in 2011 when they started the Horfield Supper Club based in Heather’s home. Want to put a festival-fuelled spring in your step, right here, right now? Go to Gopal’s and grab your gloriously gorgeous gratification.

This neat, smart, artfully stylish little restaurant is not where you’d expect to discover a restaurant this neat, smart and artfully stylish: to find it, you have to wander along the soulless little stretch of concrete walkway twixt Bear Pit and bus station, and only then between 6pm and 9pm on Wednesday through to Saturday evenings. But go with the, erm, rather insalubrious flow, because there’s foodie gold at journey’s end. Alex Poulter and Polly Frost established the East Bristol Bakery in 2012 before taking a change of direction to open Flow three years later, with an aim to “take a more contemporary, inclusive approach to plant-focused dining” – and my goodness, the pair have beyond fulfilled that aim. Small plates go large on bright, bold flavours here and certain combinations are unique, to say the least (at the time of writing, for example, poppy seed and buttermilk twiglets with cheese on toast custard – like, wow?!) But such combinations are not even distantly related to gimmickry; every single element on every single plate of Flow’s impeccably considered array brings a sheer, uplifting blast of astonishment to the table, at prices that leave you marvelling at how food can be this good at such a down-to-earth price.