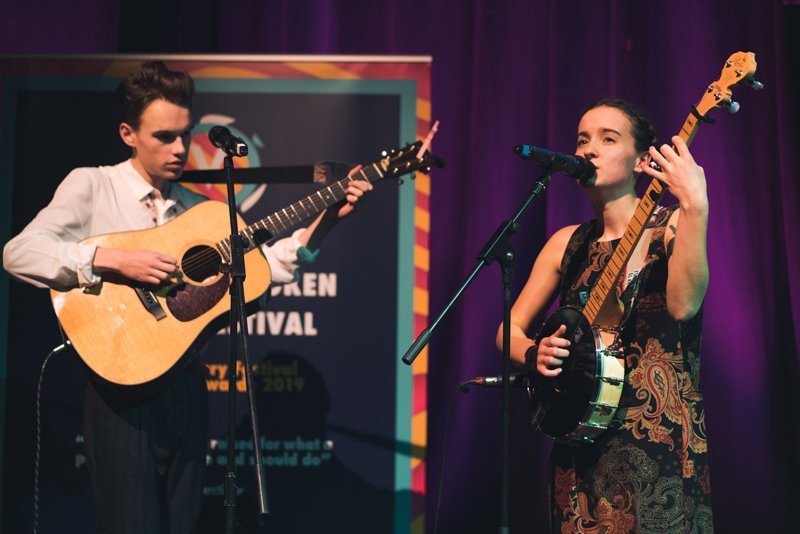 Rainy Day Woman’s Hannah Pawson and Gabriel (Gabes) Wynne have been playing together for seven years. Things began with Hannah performing some Laura Marling songs at a folk club.

“Gabes snuck in to listen at the back, even though he’d been under strict instructions not to come,” Hannah adds wryly. The duo started playing covers at open mics and other casual events around the Devon coastal town of Exmouth, developing their style and learning their craft.

For Gabes, exposure to other live bands grounded in the Westcountry, such as Show of Hands and Philip Henry and Hannah Martin (now Edgelarks) made a memorable impression.

Singer songwriter Hannah comments, “I remember feeling pretty unconfident in my early teenage years and was told my voice was too ‘thin’.” Ironic, coming from a slight woman who now delivers a gritty and determined sound.

Bob Dylan’s The Times They Are A-Changin’and Desirewere early influences. In fact, the band’s name is a nod to a Dylan song. Hannah describes deliberately shaping her evolving voice, “into what I wanted it to be from listening to music that I loved.”

In terms of the unique sound that is Rainy Day Woman, Hannah explains the bare bones were laid down early on, “using two guitars to mimic a Gillian Welch and Dave Rawlings minor-y sad sound.”

Recently, they’ve added more instruments – a mandolin and banjo. This has led to writing and composing in quite a different way.

“Basically, it’s all an ongoing process which is why we love it! Even Gillian Welch said in a recent interview for the New York Times that she only thinks they’ve just got good at what they do, after performing and releasing incredible music for decades.”

So what attracted them to folk? “The folk movement is about sharing stories, experiences, emotions and hardships through generations. I love the community aspect of this.” To Hannah, these folk narratives have a didactic purpose.

It is perhaps no co-incidence that Hannah qualified as a social worker, though she recently changed tack and now works for a city farm.

Significantly, Rainy Day Woman’s first EP, Gallows Green (2018), centres on stories about female resilience. Their latest EP, Home (2020), tells of the struggles of refugees fleeing war and persecution, only to find that Europe’s fences are up. There are few legal routes to safety.

The songs, “Aimed to connect the collective need and dreams for a home, whatever that may look like.”

In terms of the creative process, Hannah is the main songwriter, often completing both music and words before handing them to Gabes. “Gabes is like an editor, sifting through what works and what could be better or different.”

Creations get tried and tested over a period of days or months. For Hannah, “The trick is to churn out as many as possible and try and suspend judgement as long as you can! I have 100s of written songs which haven’t worked, but often find lines or bits of tune from them in songs that did, even years down the line.”

The Bristol Mag recently highlighted an official statistic suggesting less than one in five UK songwriters are women. This is no surprise to Hannah, who also commented on the visible lack of female instrumentalists.

“As a songwriter and musician, I very often find myself faced with this irritating stereotype, that I’m a singer and not a musician, that my guitar is for decoration. It was one of the reasons I took up banjo, so . . .  I would stop getting comments like ‘you’re good for a girl’ or whatever.”

Rainy Day Woman had a presence on the Bristol music scene before making Bristol their home. They’ve performed at No. 1 Harbourside, The Room Above, Sofar Sounds, To the Moon, and The Lion in Easton. Hopes for future venues as restrictions lift include, “arts centres, small theatres, beautiful churches or characterful pubs.”

The unreleased song “Lost My Mind” is one of Hannah’s current favourites. “I wrote [it] in lockdown about feeling depressed and directionless.” Untypically, Hannah composed it, “finger picking on Gabes’ parlour guitar.” The result was a song with, “a light, airy quality to it that some of my others don’t. I liked how this quality contrasted to the subject matter, bringing dark thoughts up to the surface and letting them breathe.”

For Rainy Day Woman, the exciting signing to Pear O’Legs Records means, “We now have a team of people who are invested in our music. People who are knowledgeable about the folk world and experienced musicians in their own right.”It also brings support with releases, tour bookings and developing contacts. “We’re over the moon,” says Hannah.