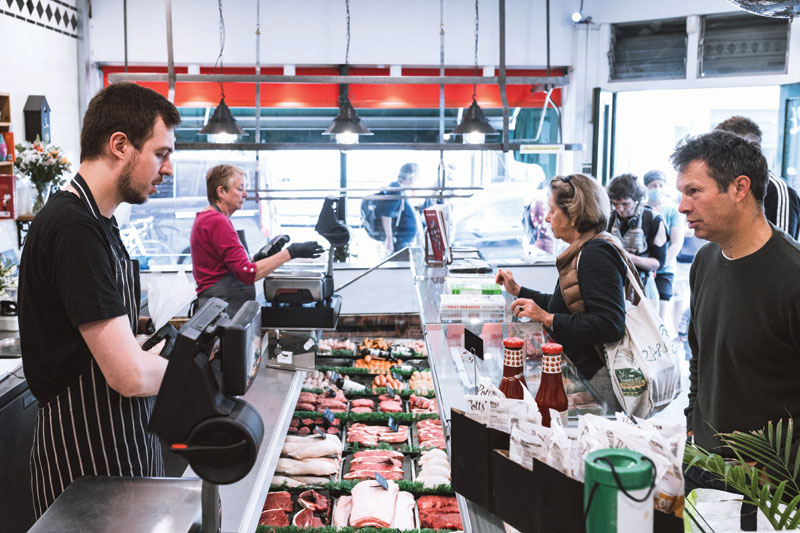 Rare Butchers of Southville: a cut above the rest

Rare Butchers of Southville – an award-winning independent butcher situated on North Street – is committed to changing the way people eat meat. Supplying ethically farmed and locally sourced produce, the team’s combined years of expertise helps customers get the best out of their meat, whatever their requirements. We sit down with owner Chris Cierpik to find out more…

Some 11 years since it first opened its doors, Rare Butchers of Southville has built an impressive reputation. Hailed as the best local butcher at the Bristol Good Food Awards four years in a row and Best Retailer of Year at the 2019 Bristol Business Awards, the North Street butcher is widely celebrated for its pristine cuts of meat bursting with flavour. Locally sourced and ethically farmed, the produce supplied by Rare Butchers is of the highest quality, with its free-range chicken boasting a nutritional value four times that of a factory-farmed animal.

As barbecue season approaches and grills are dusted off, we sat down with owner Chris Cierpik, who took us back to the very beginning of his 42-year career. He shared his love of food and independent business and explained why ethical farming is better for the planet, for the wildlife and for our health and taste buds.

As we grab a coffee at Yafo, a brilliant café-cum-restaurant serving authentic falafels situated just a few doors up from Rare Butchers, there’s a palpable sense of camaraderie amongst the Southville indies. It’s a joy to witness, in fact, as endless streams of loyal customers and local business owners stop to chat to Chris as we take a seat on the veranda.

“I really love independent business,” Chris begins. “North Street is full of them.” He points out at least three others independents in our eyeline – all of which seem to be run with the same level of pride and enthusiasm. “I really love what I do. I have a strong passion for food. When I’ve been asked before about why we’re so busy and why we’re so successful, I think it’s mainly because I really want the food to taste great. We only get high-quality meat from local farms.”

Rare Butchers’ produce comes from within a 50-mile radius of Bristol. “We get our lamb from a farm in Abbots Leigh. We get our venison from Ashton Court. We get our free-range chicken from Radstock, our eggs from Chew Valley, our pork from Taunton, beef from Nailsea, and turkeys from Chew Magna.”

Rare Butchers of Southville sees around 900–1,000 customers every week, feeding thousands of families in Bristol every month

It’s evident in the way Chris speaks about the produce that he cares deeply about where he buys it from. Our conversation moves on to the subject of regenerative agriculture. A conservation and rehabilitation approach to food and farming systems, regenerative agriculture focuses on topsoil regeneration, increasing biodiversity, improving the water cycle and strengthening the health and vitality of farm soil. According to leading experts in the sector, regenerative agriculture can also help to mitigate the climate crisis. In recent years, the UK has made a significant shift towards this style of farming, working in harmony with nature, looking after the soil and the pastures, and ensuring the animals’ welfare.

“There’s a massive difference between a factory-farmed animal and a free-range one and regenerative farming is exactly what we need to be moving towards,” Chris points out. “I’ve done a lot of reading because I want to be knowledgeable about where our meat comes from. I want to answer our customers’ questions. When I first discovered local, ethically farmed meat, it was the taste and the way it looked that first struck me. Then you realise that it’s because of the way the animal has lived on the farm.”

Rare Butchers of Southville sees around 900–1,000 customers every week, feeding thousands of families in Bristol every month. The shop’s success is manifestly built on the back of Chris’s experience and a brilliant seven-strong team. Working in the industry from the age of 16, Chris learned his craft at Bristol Meat Trader, which he says was “as tough a training ground as Gordon Ramsay’s kitchen”, before going on to fine-tune his skills at his first shop in Portishead, working as a retail and catering butcher. The success of these initial endeavours was down to maintaining an exceptionally high degree of quality control, keeping consistency at the heart of the business. “Uniformity is everything”, he emphasises. “We produce restaurant-standard cuts. When you buy four steaks from us, you will have four identical pieces of meat to enjoy at home.”

Today, Rare Butchers supplies some of the best meat in the west to a whole host of local restaurants including Southville gem, Sonny Stores, where the team get together for their staff Christmas meal.

As he becomes ever busier, Chris hints at his plans for the future and even ponders on the idea of expanding the kitchen to make a range of new products, such as pâté, Scotch eggs and biltong. It’s abundantly clear that despite the success, however, Chris is always striving for perfection. “I never feel like I’ve arrived,” he tells me. “There’s always something more we could be doing. We’re inspired by some of the best butchers in London and we visit them a couple of times a year. They always give us such a warm welcome and they’re always happy to share their knowledge.”

With summer just around the corner and the prospect of outdoor cuisine very much on the cards, you couldn’t do better than to head down to Rare Butchers for a cut or two of the finest meat around.