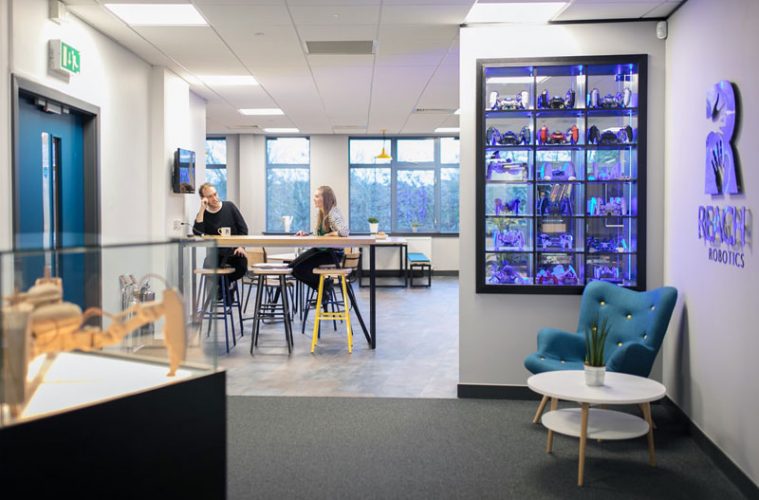 In the past few years, the team have seen unprecedented success and multi-million sponsorship deals thanks to their MekaMon range of robots, that can be paired with smartphones to enable battle in physical and augmented reality. Throw in a partnership with Apple, and it was clear the team needed a workspace that reflected their ever-increasing reputation – cue the move to the new headquarters in Stoke Gifford and the call to Interaction.

After gaining an in-depth understanding of how the Reach team wanted to function, and ensuring it was involved in the design, Interaction delivered a creative space that will serve to enhance the company’s growth and continued success. Stand out aspects in the design include bespoke laboratory areas, a tech-savvy social gaming area and showcase area for the MekaMon prototypes.

Commenting on the design and build process, Interaction designer Victoria Wright discussed how: “The Reach Robotics team are creative and forward-thinking, and so we were keen to design a workplace that reflected this. We combined practical working areas with more laid back social spaces, finished off with creative touches – resulting in a modern space that provides the team with the ideal environment to research, design and thrive.”

Overall, the new space will facilitate a more creative and efficient working culture, and will effectively meet the company’s needs for research and design. It will also prove vital in showcasing the products to potential sponsors and helping the company to entice new recruits.

Future success is certainly in Reach for this Bristol-based team!