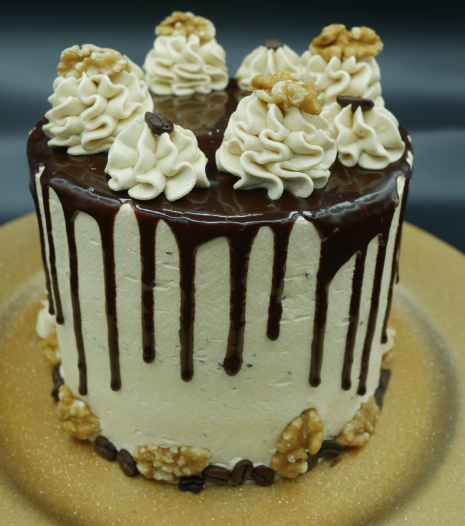 Earlier this year I did a baking demonstration at a cheese and ale festival and needed to come up with a cake to fit in with the theme, so I had to go with the classic stout cake. Now when you think of stout cake, you probably think of a big, dark sponge with a dollop of cream cheese frosting on top – don’t get me wrong, there is nothing wrong with that! I just thought that it could do with a 2019 makeover.

My version is made with a Bristol chocolate stout, a coffee buttercream and a chocolate ganache drip. I carried on making this cake at food festivals across the country throughout the summer and it has gone down an absolute storm with the crowds so I wanted to share it with you all to enjoy.

• Next, make the ganache. Break up the chocolate in a heat-proof bowl. Heat the cream in a pan until steaming and bubbling around the edges. Pour over the chocolate and leave for a few minutes. Stir until smooth and glossy.

• Assemble the cake. Set aside eight walnut halves for decoration. Chop the remainder into small pieces. Place one sponge on a board or plate, spread over a thick layer of buttercream and sprinkle with chopped walnuts. Repeat with the next sponge. Top with the final sponge. Spread the buttercream evenly over the top and sides of cake and smooth with a cake scraper and palette knife.

• Drip the ganache over the edges on three to four sections of the cake. Transfer the rest of the buttercream to a piping bag with a star nozzle.

• Pipe stars of different sizes on top of the cake. Sprinkle with chocolate covered coffee beans and top with walnut halves.