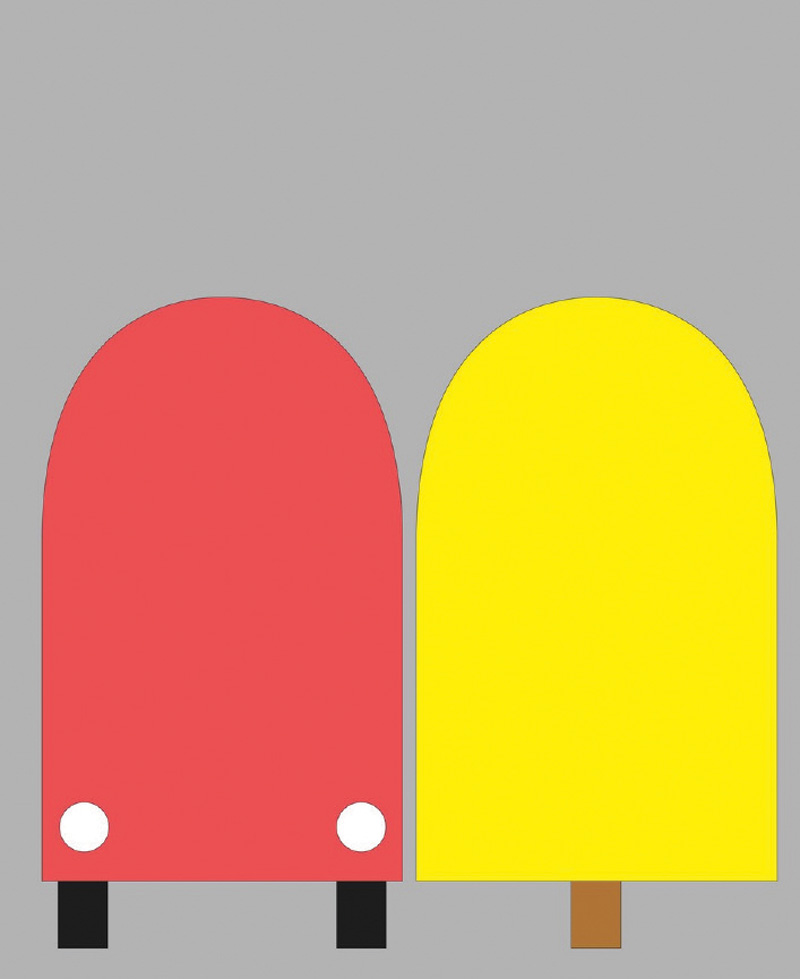 A new exhibition that has opened at Southmead Hospital profiles the work of Andy Goodman, who hails from Bristol. The artful visual playfulness in his work is hard to resist; the hope is that the images will raise the spirits of staff and visitors

Andy Goodman studied an art foundation course in Cambridge and a graphic design BA at Maidstone College of Art in Kent before moving to London where he worked as an editorial designer and art editor for Vogue, Condé Nast Traveller, House & Garden, The Observer and The Independent on Sunday. “Aside from commissioning art for these magazines,” Andy explains, “my interest in illustration grew from the children’s books of Bob Gill, Bruno Munari and David Mckee. These artists inspired me to write and illustrate books such as It Was So Quiet I Could Hear a Pin Drop and This is the Cheese, published by Edizioni Corraini and Princeton Press in New York.

“It wasn’t until I moved to the west country seven years ago that I started to focus solely on graphic illustration and began working on a variety of editorial and advertising commissions with my agent Siobhan Squire. These include Routledge, Northbank Design, The Guardian, The Evelina Children’s Hospital in London and, most recently, a series of prints for the new Therapies Centre at Bath’s Royal United Hospital. These prints were based on themes of well-being, mindfulness and rehabilitation and it was this work that led to my current project with North Bristol’s NHS Fresh Arts programme, run by Ruth Sidgwick.”

Entitled, Red Lorry, Yellow Lolly, the exhibition will feature a series of graphic prints that aim to bring a smile to staff and patients at Southmead Hospital. Using fine line and bright colours, each print is underpinned by everyday phrase and language and has a general tone of light-heartedness.

Many of them are part of a series called Bristol Faces where Andy has used a selection of Bristol’s familiar buildings as a graphic image of a recognisable face. “What really matters, what’s essential to my process is seeking out the ‘eureka’ moment, that ‘click’ when the idea resonates”, says Andy.

“I’ve always been attracted to shape and form, and to clean lines and strong, geometric imagery.” Andy also takes creative inspiration from artists who paint: “Top of the list is William Scott, a Royal Academy artist. I always have postcards of his paintings of pears (from the 1960s) on my mantelpiece. I also love the naive art of Alfred Wallis’s boats and the sculptures and paintings of Barbara Hepworth and Ben Nicholson who flourished in the unique light of Cornwall.

“I was asked a few years ago by the Royal Academy Magazine to photograph some works by the landscape artist, Richard Long, at Houghton Hall in Norfolk. Since then I’ve been fascinated by large-scale work in which the landscape is a participant.”

The Red Lorry, Yellow Lolly exhibition is a great opportunity to introduce a whole new audience to art, as many people visiting and working at the hospital may have never bought a picture or even been to a gallery.

“In these uncertain times, I hope my work provides a welcome distraction for those walking up and down the corridors and racing to appointments.”

Red Lorry, Yellow Lolly is in the main atrium of Bristol’s Southmead Hospital. Limited edition prints from the exhibition are available at fivebargatestore.myshopify.com