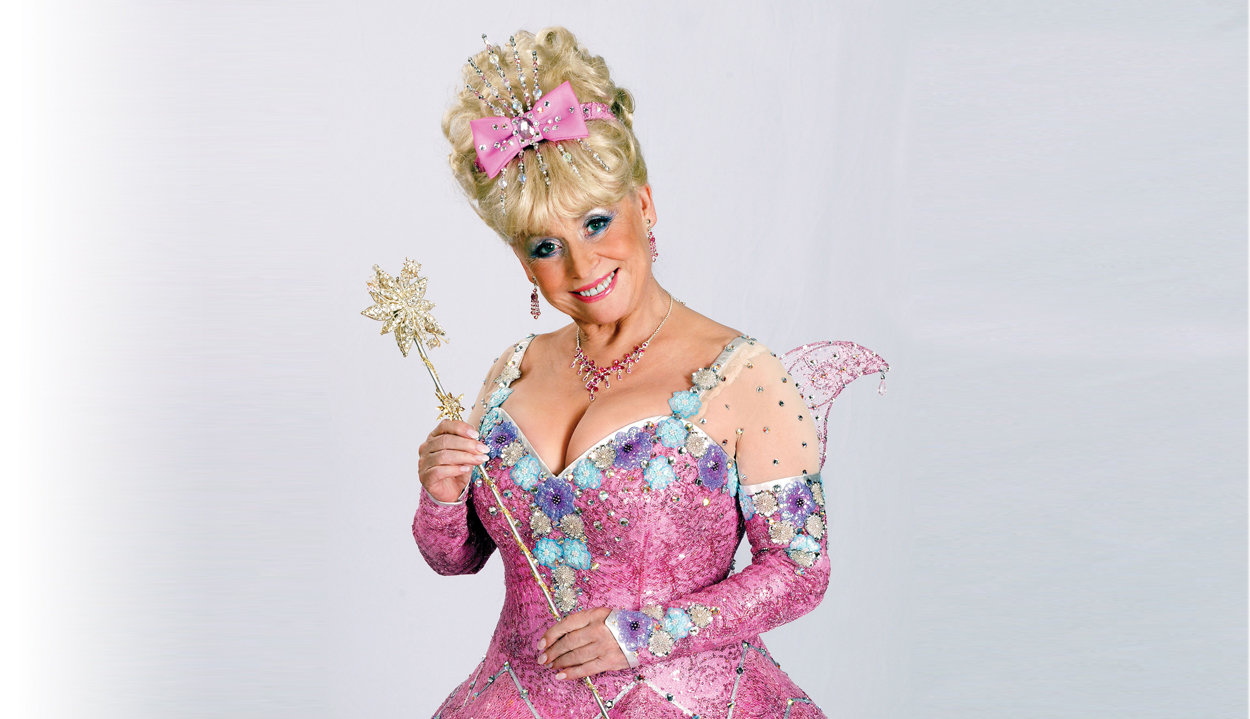 Following the sad news of Dame Barbara Windsor’s passing, we remember her radiant joy with an interview from our magazine from December 2010 where she shares her memories and favourite tunes with Mick Ringham ahead of her panto season at the Bristol Hippodrome.

To say that Barbara Windsor has enjoyed a full life in show business would surely be an understatement. Now in her 60th year in the profession, this well-loved and respected actress is back on stage playing Fairy Bowbells in Dick Whittington at the Bristol Hippodrome.

At the age of 73 you may have thought that on a cold winter’s night it would be time for her to put her feet up, have a cup of tea with husband Scott and watch a few soaps on the telly. However, this is difficult when you are a British icon.

She started her career with Madam Behenna’s Juvenile Jollities, later progressing to the Aida Foster School in Golders Green and after that experience this bubbly little girl literally never stopped performing. Musicals, theatre, television and films were to follow and take her not only into the West End and Broadway, but around the world.

Barbara has been BAFTA nominated, won ‘best actress’ in the British Soap Awards, gained a lifetime achievement honour and for full measure in 2000 she received the MBE.

Her personal life reads like a novel, what with her marriage to Ronnie Knight and her East End association with the Krays. Later she was a real-life landlady, when she ran a pub with her second husband – all adding to her charisma. She has been the subject of This is Your Life and revealed on the TV documentary Who Do You Think You Are? to be related to John Constable.

Barbara is synonymous with her portrayal of the good time girl in the Carry-On films of the ’60s and ’70s, and her character Peggy Mitchell in EastEnders has brought her huge respect from both within the industry and from her millions of fans.

When asked why she was going back to the stage so soon, she laughs: “I’ve got my breath back now, after 15 years of EastEnders, and I love the theatre, in particular panto. I’ve always wanted to play the Hippodrome and we truly have such a talented and wonderful cast. I’m really excited and so looking forward to being in the West Country again.”

Judy Garland The Man That Got Away
Judy sang this in the film A Star is Born and it was delivered with such passion. She was robbed of an Oscar that year, but to me she was a triumph. I played Sadie, one of the orphans in the stage production when I was 13; the leading man was Johnny Brandon. I had such a crush on him and he got me my first TV appearance. He lives in New York now but we still manage to keep regular contact.

Robbie Williams Let Me Entertain You
Dear Robbie, thank goodness he’s back on track. He is a born entertainer and would have been popular no matter what era he had lived in. I can’t wait to see him back in concert with Take That.

Lenny Kravitz Heaven Help
It was 1993 when Scott and I first started our relationship; he bought this record for me and didn’t stop playing it. I had known his parents for years and they were good friends of mine.  They asked me to dinner one evening and by chance their son Scott came to pick me up and drive me over. That was it as far as I was concerned, we married in 2000 and I love him to bits.

Rod Stewart Have I Told You Lately That I Love You
This was the first record I bought Scott; it was a special time in my life and one that will always remind me of those early days together.

Doris Day Secret Love
One of my favourite female film stars. I adored her in Calamity Jane, where she played alongside Howard Keel. I was fortunate enough to play the role in 1979 with my friend Norman Vaughan. It was a very happy time and a successful production.

Elvis Presley The Wonder of You
My all-time favourite male singer. He was the king in my eyes and still is. The only regret I have is never having the chance to see him perform. Sometimes in the evening, I put on his Las Vegas video to get my fix of Mr Presley. Incidentally, it’s also played at the Emirates Stadium as my brilliant team Arsenal come out of the tunnel at every home game.

Anthony Newley You Made Me Love You
We were both East End kids and were proud of it. I was lucky enough to have just one scene with him on EastEnders. Anthony was a dear and close friend, we both loved this song and would joke that he would sing it at my funeral and I would sing it at his. Sadly, it was not to be.

Billie Holiday God Bless the Child
I’m a huge jazz fan and this was the first jazz single I remember hearing. She has an amazing voice, which is perfect for the medium. I had a chance to tour with the Ronnie Scott Band many years ago. As always I did my best as a singer, but this vocal style is sadly not me.

Elton John Your Song
To see him in concert is an absolute must. He has such a great talent and is a major performer. I’ve known Elton for years now and was asked to jump out of his 60th birthday cake as a surprise. I know I’m a little on the short side but, come on, it was such a tight squeeze; however, I did it and on cue, jumped out. The crowd went wild – I can still see their faces.

Sting Spread a Little Happiness
With what’s going on in the world today, this song has a wonderful message; in fact, I have chosen it for my pantomime to sing with the juvenile performers. Paradoxically, that is how I started in showbiz at the Golders Green Hippodrome and here I am 60 years later, at the Bristol Hippodrome – I couldn’t have timed it better.

Dame Barbara Windsor, DBE, born 6 August 1937, passed away on 10 December 2020.
Our thoughts go out to her husband Scott, and her family and friends.

To make a donation to the Alzheimer’s Society:
https://www.alzheimers.org.uk/get-involved/make-donation