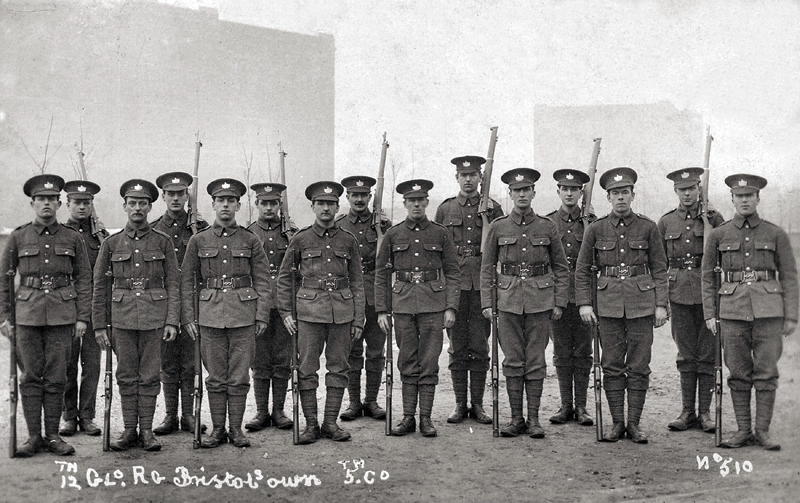 When war broke out in July 1914, Bristol was relatively prosperous, with a population of more than 350,000 and an economy based around its port and other thriving industries. The initial call to arms was answered by the city’s men – mostly the young and unattached – who enthusiastically volunteered in their droves.

Bristol would continue to supply a steady flow of lads until conscription was introduced from January 1916. Some 55,000 Bristolians would join up in total: amazingly, this represented around 50 per cent of the city’s able-bodied males of military age. Around 6,000 of those men would die, mostly in combat, or from wounds sustained during or after the war. 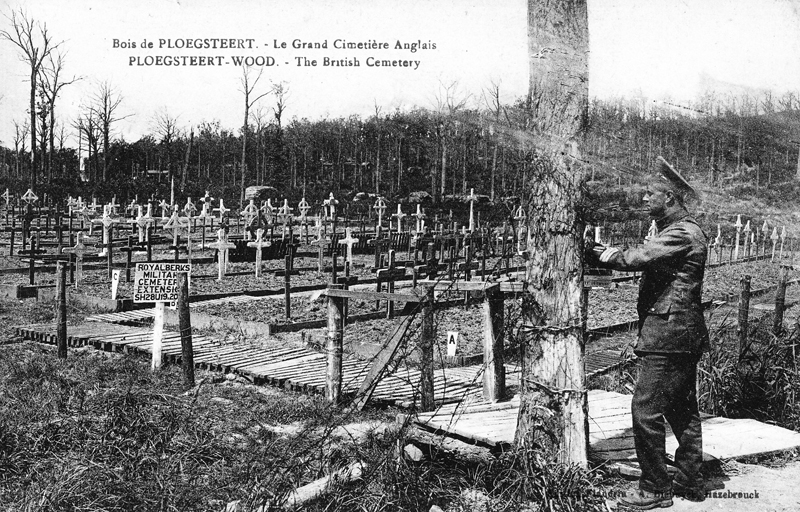 Bristol Territorials went into the trenches for the first time at Ploegsteert Wood, Flanders, in April 1915 where many were killed or wounded (image Clive Burlton)

The 7th (Service) Battalion meanwhile, another Bristol-formed battalion, had a different experience of war. Departing from Avonmouth, it landed at Gallipoli to fight the Turks in July 1915, before being evacuated to Egypt in January the following year, and then transferred to Mesopotamia in February 1916 for more operations against the Turks.

A number of other Bristol-formed battalions from the Gloucestershire Regiment found themselves at the forefront of some of the most famous battles of the First World War, including Loos (1915), the Somme (1916) and Passchendaele (1917). The 12th (Service) Battalion, a ‘pals’ battalion’ dubbed Bristol’s Own, raised right at the start of the war by the Citizens’ Recruiting Committee, fought in major phases of these battles in France before being transferred to Italy, where it stiffened Italian resistance against the Austrians, before returning to the Western Front for the final push to victory.

Not all Bristol men joined the Gloucestershire Regiment – in fact, there were men from the city in almost every regiment, especially the Somerset Light Infantry and Royal Gloucestershire Hussars. Eric Welchman was born in Sri Lanka, where his father was a missionary, but he was resident in Bristol from the age of six, when his father returned home to become a local vicar. Eric grew up in Berkeley Square in Clifton and was educated at Clifton College – a keen sportsman, he trained as an officer, joining the Lincolnshire Regiment in 1912. Lt. Welchman’s fate was to perish at the British Army’s first major engagement of the war – the Battle of Mons – in August 1914. He was aged just 21 and among the first officers of the conflict to die. Eric’s father was still ministering in Bristol when the next world war came around: his church at the time (Temple Church) was wrecked by German bombs in 1940.

Also involved in this battle was Clifton-born Captain Douglas Reynolds. He was awarded the Victoria Cross for his bravery in orchestrating the recovery of British guns under enemy fire during the retreat from Mons in August 1914, thereby preventing them falling into enemy hands, and silencing a German battery the following month. The centenary of that first action saw a VC paving stone laid in Bristol, outside St Peter’s Church in Castle Park – the first of eight to be installed in the city to commemorate the brave men, either born in the city or with a strong connection to it, who won Britain’s highest award for gallantry. Promoted to major, and a battery commander, Reynolds was twice mentioned in despatches, then mortally wounded after being gassed, dying in a French hospital in February 1916, aged 33. He left a four-week-old son. 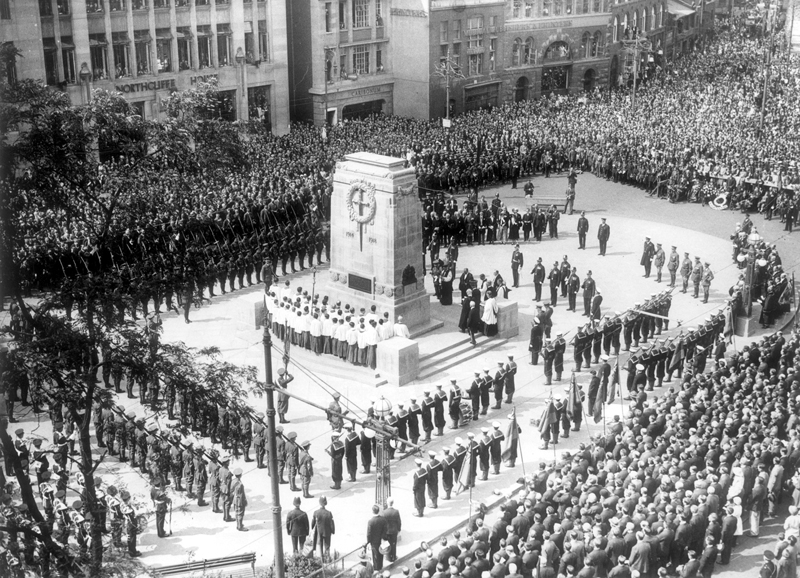 The unveiling of the Cenotaph on Colston Avenue, Bristol in 1932 (image Bristol Archives)

Many Bristol men were already in the Royal Navy when war broke out, being swiftly joined by another 600 from the reservists, then over 2,800 more who joined up as the war progressed, with many working on minesweepers. Large numbers of Bristol residents were also in the merchant navy; several hundred would end up losing their lives including deck-boy William Clements, who was just 16 when the hospital ship SS Llandovery Castle was sunk by a German U-boat on 28 June 1918.

We should not forget that the army and navy both had fledgling air arms, which would amalgamate to become the RAF by the end of the war. Come the war’s conclusion, the RAF had more 1,500 Bristol F.2B fighters at its disposal – a plane that had been manufactured by the Bristol Aeroplane Company, first established at Filton in 1910.

As a result of this conflict being history’s first ‘total war’ in which a whole nation was mobilised to support, both at home and overseas, many Bristol residents were exempt from fighting on the front line, such as dock workers who were essential in continuing the workforce at home.

As well as men, the war changed the lives of Bristol women forever. Shortage of men meant women were employed in traditionally male roles, and they made their mark particularly in munitions production. Women helped churn out shell cases, explosives, engines, motorcycles and aircraft in numerous factories around the city, while a new installation at Avonmouth in 1918 saw them producing shells containing mustard gas. This was dangerous work, and during the final six months of the war there were three fatalities and more than 700 injuries from a workforce of 1,100. The factory even had its own hospital. 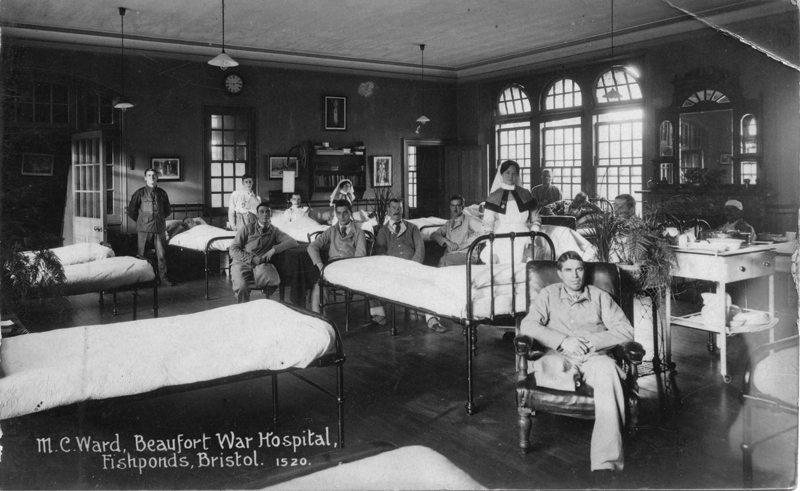 Not everyone could embrace the war, and it is known that 350 men from Bristol and the surrounding area regarded themselves as conscientious objectors. Many of them were imprisoned in harsh conditions, while others undertook non-combatant roles. Either way, many found it hard to obtain employment after the war, as they continued to pay a price for the courage of their convictions.

Many of those who returned to Bristol during and after the conflict were wounded (some more than once) and some were permanently disabled. The city became a centre for treating the wounded as Bristol Royal Infirmary, General Hospital, Cossham and Southmead all played their part as military hospitals, while the Bristol Lunatic Asylum in Stapleton, as it was known, was taken over by the War Office as Beaufort War Hospital, becoming a military hospital with more 1,400 beds for the sick and wounded. It was then renamed as Glenside Hospital after the war. The city’s large houses also found another use as hospitals – Kings Weston House, Ashton Court Mansion and Redmaids’ School to name but three. 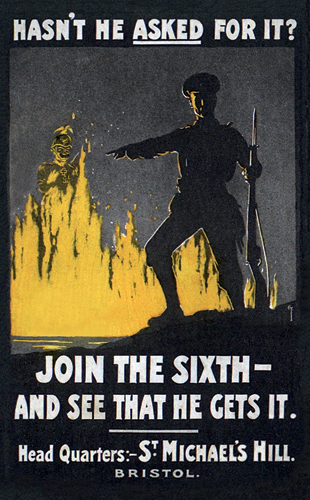 Every one of Bristol’s parishes has a memorial dedicated to those who died during the First World War, with more names added following subsequent conflicts. Tragically, the city’s suffering did not end with the war’s conclusion in 1918 as at least 1,200 Bristolians died during the influenza pandemic, also known as the Spanish flu of 1918-19, which swept across the world and killed an estimated 50 to 100 million people.

This month Bristol’s war memorials will once again be the focus for Remembrance, with added poignancy as we recall the end of a shattering conflict that finally ground to a halt 100 years ago after levels of death and destruction that would inhabit people’s worst nightmares for years to come. Some people may still venture to ponder why we bother remembering a war from so long ago: if you could count the 1914-1918 names on all the war memorials in Bristol you’d have many thousands of very good reasons.

Featured image: A group of Bristol’s Own soldiers, photographed between December 1914 and February 1915 (image SOGM)