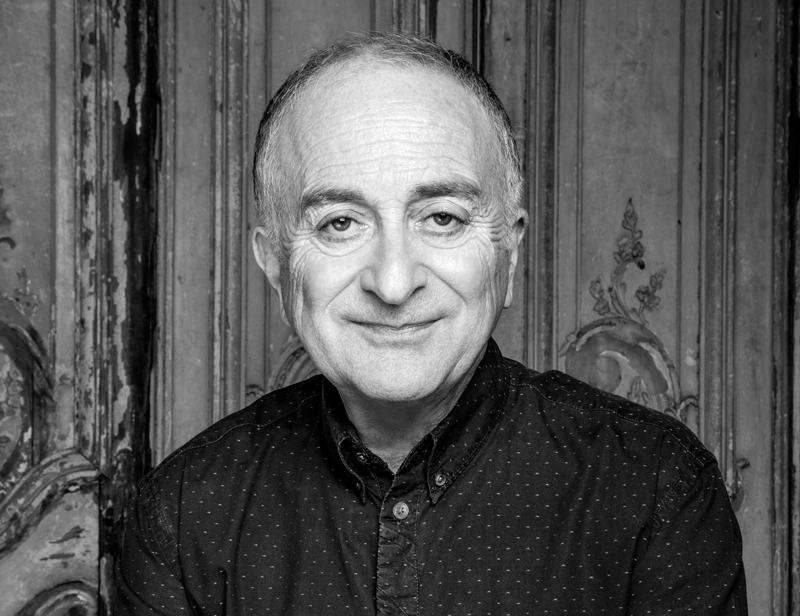 Here we look back at Melissa Blease’s interview with Sir Tony Robinson last year where he talked about his career highlights from Blackadder to Time Team. This multitasking media maestro was then in the middle of a globetrotting schedule – a far cry from what’s happening today – but his perspective on history and the idea of living history in the present, as we are all doing right now, has peculiar resonance today

Given Sir Tony Robinson’s currently frantic, globetrotting schedule, I’m lucky to catch him on a rare day off when a phone chat doesn’t involve tricky time zone calculations and lengthy negotiations with mobile phone service provider tariffs. “Right now, I’m making a series called Around The World By Train for Channel 5,” Tony explains, talking to me from his London home. “I did it last year and they liked it, so they asked me to go around again, the other way. It’s been very hectic, as you can imagine – but absolutely wonderful.”

Wonderful indeed – and what a great gig – but no matter where the TV travel itinerary of today takes us, Tony is, to many of us, the Time Team guy. To many more, he’ll always be Blackadder’s faithful manservant Baldrick. For those of a certain, erm, vintage, he brightened up our pre-school years as a Play Away presenter. But now the multitasking media maestro (actor, writer, TV presenter, author and political activist all vie for attention on his CV) is a rail travel buff too; is Tony Robinson the ultimate renaissance man?

“Well I’ve done rather a lot in my time – it’s quite bizarre really, isn’t it?” he laughs. “It’s difficult to pick highlights, but clearly the thing that transformed my life was getting the role of Baldrick in Blackadder. I was living in Frederick Place in Bristol in the early 1980s when out of the blue, a script plonked onto my doormat with a note asking me if I’d like to play Rowan Atkinson’s servant in his new series. The thing is, I’d always wanted to be associated with what I considered to be Oxbridge humour, from That Was The Week That Was through the Pythons and Not The Nine O’Clock News – it seemed to me to be a very specific type of British comedy that I really wanted to be a part of. But I thought I’d never been able to because I left school at 16 and never even went to university, let alone to Oxford or Cambridge. But Blackadder happened, and it was a marriage made in heaven, and my instincts were right; I really got on with the people involved and I felt like I had a contribution to make. The children’s series that I did shortly afterwards (Tales From Fat Tulip’s Garden) was huge for me too, because it was the first show I was ever in control of, from writing and performing to co-producing. And of course, Time Team was very important, because that was the first time I went fully into presenting which is a very rarefied skill.”

All told, there are intrinsic links between Blackadder and Time Team aside from the man at the epicentre of the action; it’s moved us, with Tony, from a bizarre concept of pseudo-history to a fully authentic peek at the past how it really was. “It may sound odd, but I’d never really thought of history as history really,” says Tony. “To me, it was just my dad talking to me about stuff he did in the Second World War. I got an insight very early on in my life that mine wasn’t the only time there’d ever been; there’d been a time when my dad was young and had adventures, and by extension there was a time when his parents and so on all had stories to tell about the lives they’d lived. And although I wouldn’t have put it like this back then, I was part of that continuum of human history. History has always been personal to me rather than academic, and as much a part of me as walking, breathing and sneezing.”

And that natural ease about a subject that so many people see as prohibitively collegiate is what makes Tony’s Time Team a primetime TV hit, presented by a man who’s about as far removed from the traditional image of ‘fusty historian’ as it gets.

“I’ve always had a thirst for knowledge but, having not gone to university, I’ve probably always had a slight chip on my shoulder about how clever stuff doesn’t have to be hidden behind obscure language,” he says. “I felt that way about archaeology even though I couldn’t spell the word correctly for years!”

Given Tony’s attitude to accessible education, it comes as no surprise that he’s a big supporter of the library. “What’s going on with library closures right now is quite hideous,” he says. “In 1963, the Beeching Report was responsible for closing down so many British railways. At the time, there as a notion of a kind of pseudo-modernity, when everything that was old needed to be expelled and replaced with new shiny things, which in those days had to be cars. And now we’re in a situation where we’ve got too many cars, and if only we had better railways. I think the same is true with libraries. Of course, the way we use libraries in the age of the internet will continue to change, but the idea that we should shut invaluable resources down seems to be absolute madness – once you shut those resources down, you never get them back.

“There are a lot of very imaginative librarians bringing libraries into the 21st century, but unfortunately there are a lot of very unimaginative local councillors intent on looking for ways not to have a shortfall in their budget by the end of the year, and libraries – all that bricks and mortar, always in a strategic place in any given town or city – well, let’s sell them off. Hideous.”

…The way we use libraries will continue to change, but the idea that we should shut down invaluable resources seems absolute madness – once you shut them down, you never get them back…

I tentatively wonder if now might be a good time to tempt Tony – an ardent political activist who formerly served on the Labour Party’s National Executive Committee but who announced his resignation from the party earlier this year – into talking politics.

“What’s going on right now is quite extraordinary,” he says. “Every piece of certainty we were surrounded by when we were children, whether to do with the bank manager, or the vicar, or the newspaper proprietor, or the politician, has collapsed around us. It’s difficult to understand the processes that are taking place, but I think that, in 10 or 20 years time, we’ll be able to step back and say, ah, now we see why all that stuff happened. But that’s the whole thing about history in the making; when you read a history book you think, for example, didn’t they know there was about to be a war? Living in the current moment, we don’t have that hindsight benefit – politically, we don’t even know what’s going to happen by the end of this week! But politics, to me, has always been just another part of human activity, so yes, of course, I’ll always be interested in that. And by extension, I don’t want to go to my deathbed thinking that I’ve never tried to be involved.”