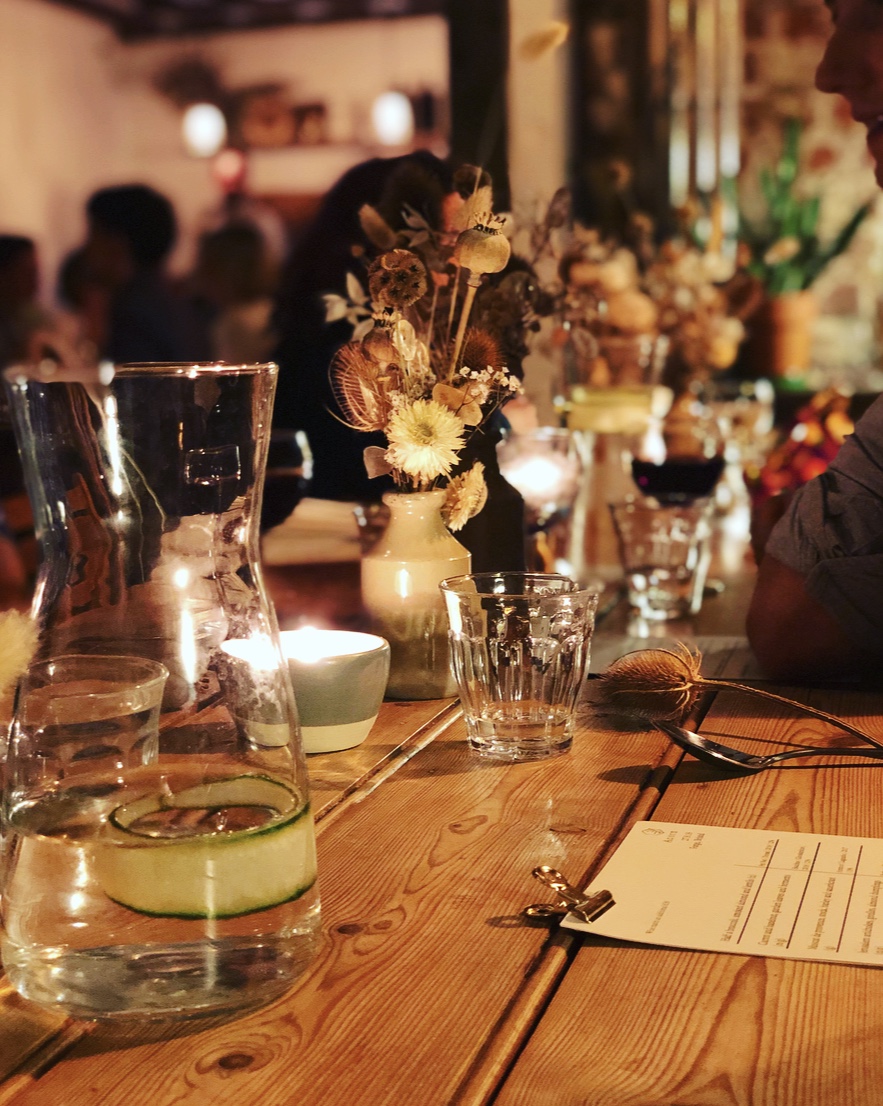 Any disciple of the plant-based diet, any West Country vegetarian or vegan worth their salt, ought to have Acorn’s award-winning cuisine on their radar. From its dining room in one of Bath’s oldest Georgian buildings, a cashew’s throw from the city’s beautiful abbey and ancient Roman spa, it has been a herbivorous bastion for years now – taking up the baton as one of the region’s leading veggie voices. It’s a place of pilgrimage, so the fact that it came to us recently is really quite a compliment.

The team is branching out into Bristol in November with a residency at Dela in Easton, and so had brought over their stylish, provenance-led pop-up to test the waters, with the place of best fit rightly deemed to be The Forge at Colston Yard. The compact but beautifully formed rustic space, completely sold out for the evening, was already full when we arrived, and we’d thought we were the keenest of the beans. Bare brickwork and long wooden benches, smartly dressed for autumn with dried flowers, thistles and seedhead centrepieces, were warmly candlelit and looked as if they’d had the Valencia treatment via Instagram; meaning the ambience was cosy to say the least.

Climbing the steps of the central staircase to address assembled supper clubbers, head chef Richard Buckley (pictured) delivered the not unwelcome caveat that the six-course tasting menu advertised before us would actually be more of a 12-courser. When you have a constant stream of culinary experimentation coming out of the kitchen it must be difficult to whittle down dishes to present to a new audience in a new city, we empathised, hungrily; as excited to sample as the team clearly were to share.

A neat grilled broccoli dish with smoked almond and lentils got the ball rolling, served with a lip-smacking 2018 Dorset Pet Nat – a type of low-intervention natural sparkling nectar with a bit of a hipster reputation, although it actually pre-dates champagne. Hot on its heels was a carrot and hazelnut paté with garden leaves and ferments, topped with sourdough crisps made from Acorn’s leftover restaurant bread and served with a bone-dry Gloucestershire Bacchus whose acidity cut through the indulgent fattiness of the paté. Between courses there was organic damson cordial; savoury-sweet with a subtle ferment flavour, it worked the way strawberries do with balsamic.

…Between courses there was organic damson cordial; savoury-sweet with subtle ferment flavour, it worked the way strawberries do with balsamic…

As the main dishes grew more robust, so did the booze. With muscat de provence, stock, barley and sauerkraut we supped on fruity Aramon from Languedoc poised to offset the salty muscat broth. Presently Team Acorn, which grows its own produce as well as buying from neighbours Midford Organic, and is working on going fully organic, snuck in a diddy serving of smoky leek soup before platefuls of Jerusalem artichokes with girolles and almond dumplings – accompanied by a full-bodied, cherry-heavy Barbera that held its own.

For those still of the mind that, even in this day and age, vegan food is uninspiring, a night with Acorn would undoubtedly be an eye-opener, with plenty of talking points. Conversation starters in this instance included a saucer piled with white pine sherbet and fresh green apple slices which added to the fun of the evening and signalled the inevitable direction change into the dessert domain. Tempting as it was to plunge face-first into the pearly dust à la Scarface, we daintily scooped it up with our fruity spades, treating it like a modern-day dip dab.

Pear and cultured almond cream, mild in flavour and made with yoghurt and fresh thyme, would have felt conservative in comparison had it not been for the Somerset ice cider. Its intense taste – achieved by freezing fresh apple juice to concentrate sugars prior to fermentation – was a satisfying addition for the sweet-toothed. The last twist of the rollercoaster around the palate saw chocolate, plum and fig served with a sweet red Bertani Valpolicella 2017 of the dangerously drinkable kind, followed by a savoury sobacha (Japanese buckwheat tea) to ease digestion.

A paragon of creativity, style and substance, this outstanding outfit has tasked itself with getting as many people as possible on board with the merits of being meat-free. The food is an incredible example of the variety achievable in plant-based cuisine and it’s clear as day to us that Bristol will be a brilliant audience for it. In fact, we reckon Richard and co should permanently plant an Acorn in the city…

Acorn’s residency at Dela in Easton will see its ‘Do No Harm’ small plates menu served on Fridays and Saturdays from 15 November to 21 December; acornrestaurant.co.uk