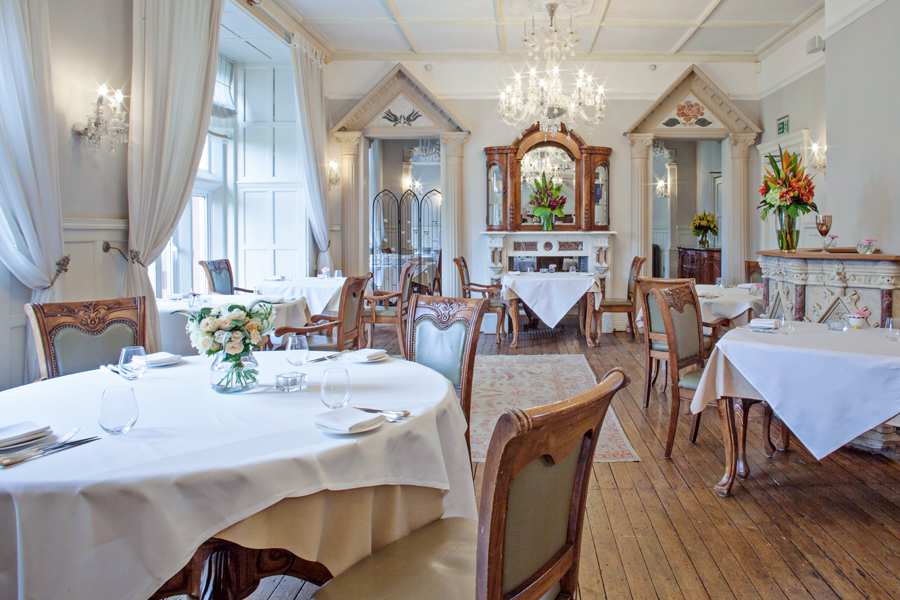 Hidden gem. It’s a term habitually overused, but a claim perfectly justified, and used entirely in its correct context, when applied to two AA-rosette restaurant Hattusa – the fine dining eatery housed within Bristol’s beautiful boutique hotel Berwick Lodge. And here’s for why.

For a start, yes it actually is a bit off the beaten track. While only a 15-minute drive from central Bristol, it’s on the outskirts of the city, not far from the bustle of the M5 – but only in terms of geography. There’s a real sense of peace about the place – every inch the calm country retreat, set within 18 acres of verdant parkland with lovely views stretching across to Wales, and reached after riding past fieldfuls of wobbling spring calves (enthusiastic chorus of aahs, duly cued). Having parked up beside an ornate fountain, we crunched over the gravel and pushed open a set of heavy wooden doors, bringing Berwick’s attractive interior into view. Dating back to the 1890s, the manor house itself is something really quite special – imposing and welcoming in equal measure, with giant crystal chandeliers hanging from the ceilings, and gorgeous furnishings abounding.

Keen to sink into some such chattel, we were shown into the lounge – replete with cosy fireside alcove, routinely plumped velveteen cushions and sumptuous sofas – and offered the drinks menu along with a slate stacked with lemon and poppyseed straws and a diminutive dish of hummus. Eager to see how the place was defining itself via the language of libation, I opted for the signature cocktail – Prosecco with a touch of rose, and a fat-and-juicy edible hibiscus flower floating in the centre of its tall-stemmed glass – which told me, in no uncertain terms, that the intention here is well-executed elegance. This objective matches naturally with the restaurant’s interior, which we had a chance to take note of once shown through stone pillar archways and seated among the old-world sophistication of the setting. But unlike many a fine-dining establishment’s, Hattusa’s Friday night scene was less hushed formality and more relaxed, contemporary vibes – all part of the home-from-home experience envisioned for guests by the hotel’s creative owners, Sarah and Fevzi Arikan.

Hattusa’s new season à la carte the focus of our attention, my hungry companion J instantly selected the braised and crispy mussels with wild garlic, samphire, asparagus and peas, and was consequently very pleased; while I ordered a similarly spring-like vegetarian dish of wild garlic – foraged from the hotel grounds – and asparagus veloute with pickled quail egg, truffle brioche and brie toastie. While some would have no doubt relished it, for me, the veloute was slightly overpowering in its garlickiness, and rather too plentiful for the delicate and perfectly delicious remaining elements of the dish, especially once a little more was poured over them by our friendly server. The highlight of Hattusa’s opening gambit was, instead, an amuse bouche of cured sea trout with burnt orange and a tangy orange sherbet dusting – as well as the light olive and harissa bread, and the incredible homemade blue cheese and mustard bread. That went down a storm with us two turophiles, especially between ladylike glugs of our recommended wines – hand-picked by the passionate sommelier, and part of an unpretentious list assembled from across the globe, including one particularly conscientious 100% carbon neutral supplier. J supped away on a rich red, while I was rightly advised to go for a fruity sauvignon that really added to my chosen seafood.

Continuing down the piscine route, J next chose the brill with wild garlic, peas, a terrific crispy-potato terrine, pickled cockles and a salt-and-vinegar powder that brought back memories of visiting Poole Quay as a kid; and I joined her via my choice of gurnard. This dish came with warm spiced fennel and potato salad, as well as tasty little mouthfuls of salt and pepper squid in a lemongrass and coconut broth that demonstrated the occasional Asian twists we’d heard tell of. While we were expertly and affably looked after by the eatery’s waiting team, a chat with Hattusa’s chef – down-to-earth Roux scholar, Paul O’Neill – injected a welcome extra element of warmth and humour into the evening. Having trained with Claridge’s in London, Paul came to the Berwick kitchen from Ashdown Park Hotel in Surrey and has continued the line of modern British cuisine – supporting local producers that share the hotel’s pro-environmental ethos, and populating the menus with the sustainable produce growing in the kitchen garden now maintained by former royal gardener Robert Dunster (more on that in our gardening column next issue). Our only regret? Not booking into one of the hotel’s 14 opulent, individually designed bedrooms

Always delighted when the dessert comes our way – let alone unexpected dessert – we were pretty thrilled by the pre-pud that arrived next. The soft, unassuming oblong of bread and butter pudding with accompanying apple sorbet was the perfect precursor to my sharp yet ambrosial lime tart with squidgy cubes of lime marshmallow, honeycomb ice cream and vanilla cream cheese. J was equally satisfied by her rhubarb and ginger cake, set among poached pieces of the fruit, a scoop of rhubarb and custard ice cream, and a gingery crumb.

Our only regret? Not taking up one of the hotel’s 14 opulent, individually designed bedrooms and saving ourselves the unflattering post-prandial waddle back down the driveway to the car…

To find out more or book at table at Hattusa, visit berwicklodge.co.uk

Next
The Robots are Coming: Innovation in Bristol
Start typing to see results or hit ESC to close
bristol gender film tv history
See all results