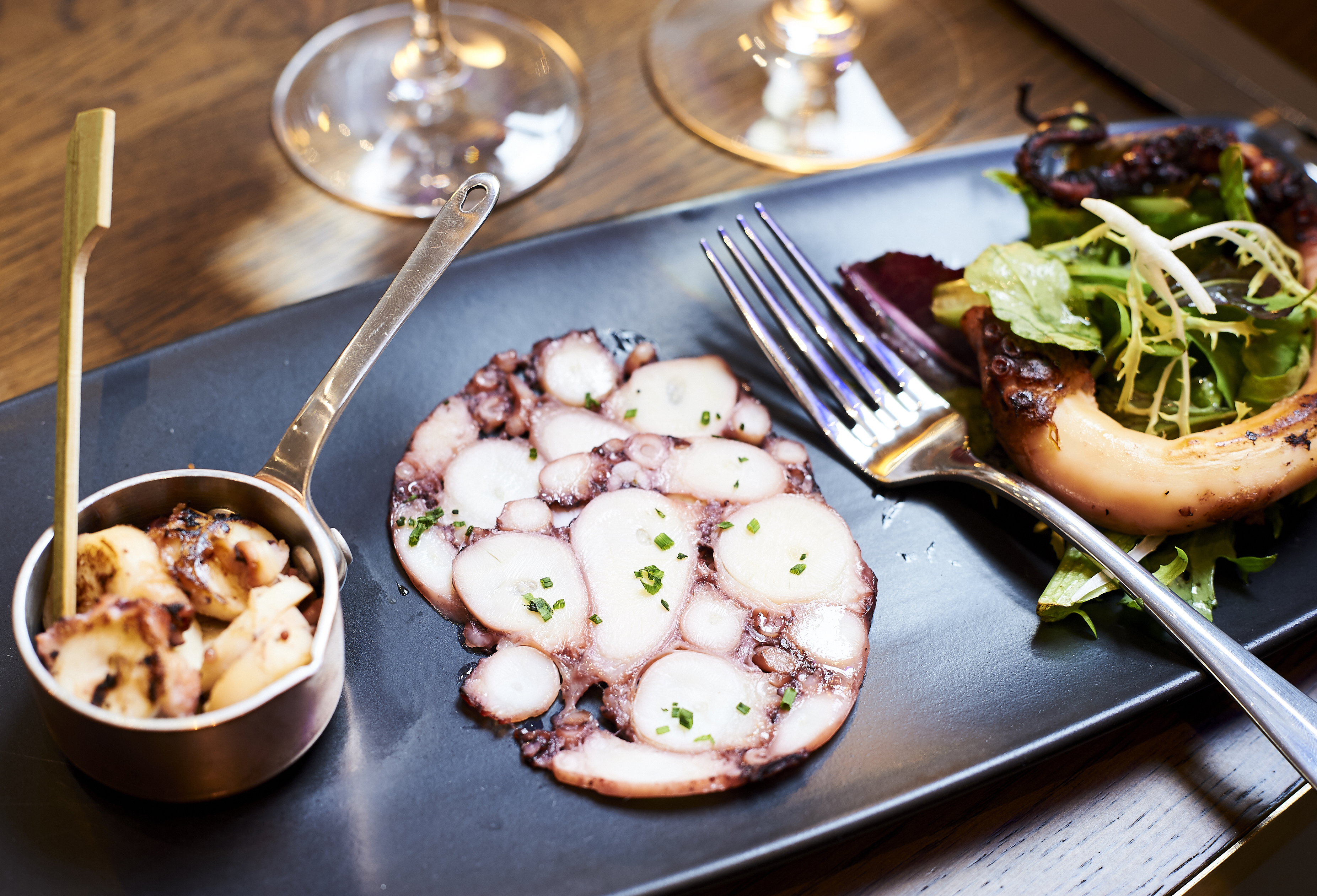 If you’ve spent more than, say, 10 minutes in our great city, you’ll know that we have just about every conceivable cuisine, street food and fine dining experience covered. Between the unabashed meat-fest of Grillstock, at one end of the spectrum, and the flourishing falafel-strewn vegan scene at the other, nobody is left wanting. But the team at the newly opened Jetty, at Bristol Harbour Hotel, felt there was something of gap in the market when it came to the city centre – a lack of delicacies representing the city’s extensive maritime history. After just a glance at their bountiful catch of crustaceans, molluscs and fishy morsels, we were keen to get on board… Situated in the bustling old city near St Nick’s Market, the former bank that houses the restaurant oozes historic charm. Venetian friezes and imposing arched windows loom as we battle through the rainy winter weather, and the gravitas of the pillared entrance makes us feel we’re about to be lectured on investments à la Jane and Michael in Mary Poppins. There’s not a trace of the venue’s previous incarnation inside, however, with the airy, open-plan restaurant aglow with smiling staff and a Titanic-dining-saloon-meets-Tate-Modern sense of pared-back luxury.

Naturally, we gravitate towards the shining, expansive bar, well stocked with rustic jars and libations of every description, and allow the vast cocktail selection to wash over us. A is torn between the aromatic Lady Godiva and a crowd-pleasing Gin Fizz, but ever a sucker for a beautiful English Garden, I’m immediately drawn to ‘Jetty Classic’ Garden Gate – as are the majority of visitors, we are told. Consisting of Hendricks gin, refreshing St Germain elderflower and rose bitters, it’s as crystal clear as its art deco tumbler and free of any mushy leaves, save for a fragrant sprig of thyme (maximising essential gin space). Lady Godiva, meanwhile, delivers a zesty punch and doesn’t stick around for long – A endeavouring to slurp every last drop of sloe gin and violet liqueur-tinged frothy egg white from her martini glass. We’re subsequently shown to our seats – or rather, sofas – at one of the secluded dining booths, offset from the main cluster of bold-print tub chairs and larger tables. Buoyed by our aperitifs, we come over all regal, sinking back into our plush, petrol blue velvet thrones, soaking in the moody down lighting and twinkling glasses. The prospect of imminent food cuts our imperial dreams short, however, as dainty shells piled with bread and butter, and a packed menu of piscine treats, swim into view. Managing to forgo the tempting ‘whilst you choose’ selection – though we could surely pack away more than our fair share of tempura prawns and intriguing cockle ‘pop-corn’ – our attention turns to the starters. It’s a carefully crafted selection of recognisable dishes with a nod to classic cooking – wild mushroom risotto, chunky fish soup (complete with little accompaniments, or ‘toys’, no less) – and experimental deviations such as seared scallop on savoury waffles with bacon jam.

A goes for the recommended trio of octopus, with carpaccio, grilled and slow-cooked variations – the latter is a particular winner, resting in a miniature copper saucepan with a chilli and lime sauce, which A gleefully douses the rest of the plate with. My eye-catching sashimi of fresh salmon, tuna, scallop and sea bass sit jewel-like alongside salty caviar and polka dots of wasabi and soy paste. A fragrant Asian salad is the perfect tonic after a wasabi misjudgement on my part (that stuff is seriously hot, people), and once the incapacitating fog had lifted, the delicate flavour of each skilfully sliced fish shone through. As we await the arrival of our mains – a leafy Sichuan chicken and prawn stir-fry for A and veal Milanese for myself – the open kitchen catches our eye, a vibrant hive behind the bar’s cool façade. Served on the same simplistic earthenware as the starters, dappled grey as an overcast English pebble beach, our second courses are a triumph. My melt-in-the-mouth veal offers added bite with its caper sauce, but it’s the accompanying macaroni cheese stealing the show, consigning its stodgy reputation to the past with the addition of light, earthy truffle oil – perfectly complemented by a crisp Chilean Sauvignon Blanc at our waiter’s behest.

A is equally tickled pink, expressing her love for the bok choi and thrusting forkfuls of soy and ginger chilli-marinated chicken my way. But despite barely finishing the generous portions, the shining beacon of dessert beckons, as ever, guiding us into harbour – bloated bellies and all. There are contenders in the passion fruit soufflé and espresso martini sabayon, but we’ve already clocked the dishes for us. The peanut butter praline is everything you could wish it to be, with the playful crunch of its toffee popcorn coating and melting toasted marshmallow combining childhood nostalgia with adult finesse. But to my mind, a good chocolate fondant is king of the puds – and Jetty’s take, complete with tangy cherry sorbet and mousse, lashings of kirsch and crumbly granola, is just about as good as it gets. Clearly then, despite the nautical themed decor and expertly executed seafood, Jetty is anything but a one-trick pony. And just a stone’s throw from the waterfront, once a hive of import and export, everything here is shipshape and most certainly Bristol fashion.