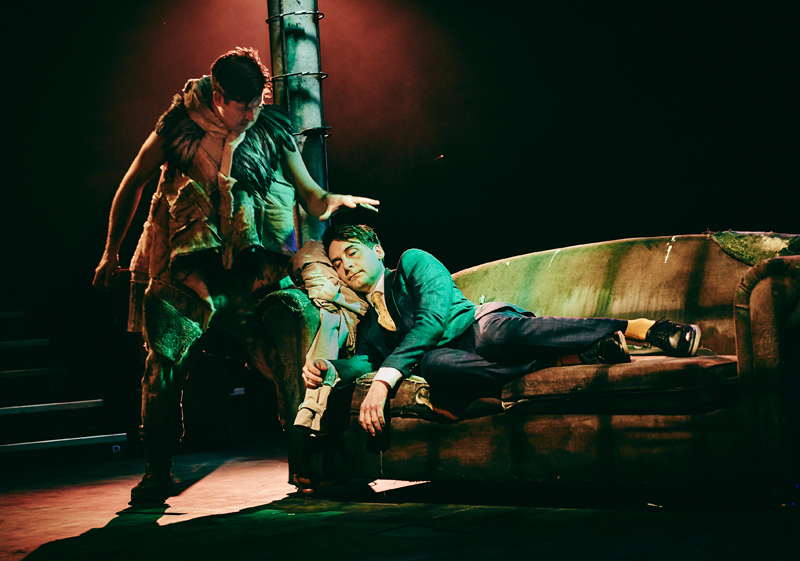 The theatrical adventure and Shakespeare’s most-loved comedy A Midsummer Night’s Dream receives a dystopian makeover while sticking true to its fairyland realm in this new production by The Factory Company. With true love never running smoothly – has it ever? – the play, directed by Tobacco Factory Theatres’ artistic designer Mike Tweddle, encompasses vengeful fairies, a doted-upon donkey, amateur actors and a whole lot of laughs.

Opening with Hermia, (played eloquently by Paksie Vernon), resisting her father Egues’ (the excellent Danann McAleer) demands that she weds Demetrius – although she is in love with Lysanda – we get a glimpse into what it is like to live in a world that is harsh and problematic.

We then meet the Duke of Athens (brilliantly played by Luca Thompson) and his wife Hippolyta, Queen of the Amazons. Thompson works the crowd perfectly throughout the performance as we see him switch to Oberon, King of the Fairies and call upon his shrewd sprite Puck to help him concoct a magical juice that changes a sleeping one’s love when they awake – and experience a true love at first sight. Kim Heron’s take on Puck is mesmerising as she enchants us all repeatedly – even if she does administer the juice to the wrong lover. A mischievous character indeed.

Joseph Tweedale put on a fantastic display as Tom Snout and Helenus (who is besotted with Demetrius). Playing to the crowd perfectly, Tweedale had us losing our socks in laughter, with his constant removing of his shoes and socks every time the tinker, Tom Snout, entered the stage.

Evlyne Oyedokun showcases her skills as Lysanda – the sassy lover, and the shy joiner, Snug, who is frightful as ever to play a lion in front of the Duke. Taking on the roles of Demetrius, Flute and Fairy, Dan Wheeler steals the show in the final scenes in his role of Flute. Not only does he encompass his unwillingness to play a female role in the performance for the Duke and Duchess, his use of subtle coverings and unfortunate positionings leaves us all in stitches even in the final moments.

The hilariously overt character Bottom, as played by Bristol-based actor and former artistic director of Myrtle Theatre Heather Williams, carries the comedic values of the production and is a central figure in the amateur actors’ subplot. Not forgetting the character’s comical incompetence as she is terribly unaware of her own ridiculousness.

There’s a slow-motion scene that’s full of hysterical motions that’ll leave you not knowing where to look with the fear of missing the best bits. Although, we can confirm the bike situation and brush-off is something that left us chuckling into the next scene.

A modern depiction on a much-loved Shakespearean comedy that has been adapted for fresh eyes to enjoy, A Midsummer Night’s Dream involves quests to love and be loved by whomever we choose – something that resonates with all those around. Exploring what can be achieved when we escape the confines of our everyday and attend to our wildest dreams, the play showcases that the power of imagination has never been so evident.

It’s charming, playful and, at times, wild, while maintaining the thick four-deep interconnected plots and inter-changing characters that will leave you wondering “how did you get changed so quickly?”

Previous
Property: Why it is a great time to sell in Bristol