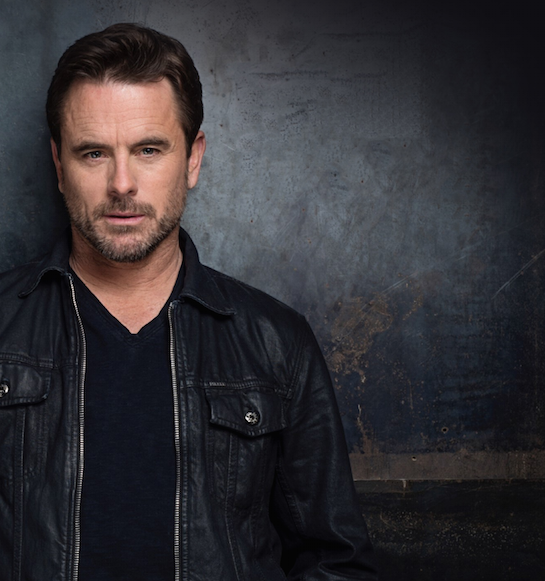 Who knew there was such an avid bunch of ‘Nashies’ in Bristol? Amanda Nicholls joined country star Charles Esten and co for what felt more like a jubilatory jam sesh than a formal concert at St George’s

Sometimes you have to force yourself to sit through the support act; or so I find, at least. But it certainly wasn’t so when Charles Esten’s opener – country-pop Brit trio The Adelaides – stepped on stage; emotive, melodious vocals fluttering over original songs and cover mash-ups flawlessly despite the girls confessing to being fed all the bourbon backstage beforehand. It’s fair to surmise there must have been a big US contingent in the audience, too – because, well, we don’t think we’ve seen any English crowd get up and dance during the warm-up.

This made for a jubilant atmosphere for Esten – best known for playing troubled guitarist Deacon Claybourne on American drama Nashville – to emerge to, brandishing the battered black guitar TV producers ended up giving him after he got a little overexcited during filming and damaged it. Flirting with his audience from the off, he talked of his day in our “wonderfully hilly town” and laughed about having to park the tourbus “four blocks away” and walk to the venue. Clearly thrilled with the reception, he recalled previous visits to the UK while playing Buddy Holly in London in the Nineties, when he also did some comedy work on Whose Line Is It Anyway, and returning as part of the Nashville cast tours. But this – “y’all actually came out to see Charles Esten!” – meant the most.

Seamlessly launching into his one-man show, Esten sang his 2016 single I Know Better Now, as well as another of his own songs, Holding On, and My Out of the Blue, written for his wife Patty Hanson. Nashville numbers such as Breathe In were also given an airing – before Esten hopped onto the piano, the only other instrument on stage save for a kick pedal to add a percussive element to certain tracks. Here he treated his ‘Chipsters’ as his fanbase has named itself, to Halfway Home and Hymn For Her – Deacon’s song for on-screen sister Beverley. “I always wish she hadn’t been killed off,” he revealed (spoiler alert!) imagining the gutsy character knocking on Deacon’s wife Rayna’s door and asking to see her liver (donated to Deacon in season three).

The gig was a journey taking in elements of the popular fictional musician Esten portrayed for six seasons, as well as his own story, and the audience was equally as enamoured with all the original material. What made it all the more charming was the off-the-cuff feel of the evening; we forgave Chip the odd tiny musical hiccup because, in his light-hearted words, he might not be as good a guitarist as Deacon but he’s all about “making a moment we all remember” and besides, he’s not fictional. A major plus.

Having brought The Adelaides back on to accompany him for his final songs, Esten moved onto When Trouble Comes, written with Sarah Siskind (responsible for many of the hit Nashville tunes). Dark, moody and not so country-radio friendly, it was a beautiful performance.

Then, arguably, the moment most had been waiting for. The foursome (the Chadelaides, Esten suggested) launched into Nashville anthem and veritable tearjerker Sanctuary ­– featuring an impromptu acapella ending inspired by the church setting of St George’s, which quite possibly had put Esten in mind of some Tennessee chapel or other. One of Nashville’s biggest tunes, Life That’s Good, was rolled out for the encore, when the rest of the audience got to their feet – to join some who had devotedly stood throughout the show – including even the usually reticent reviewer caught up in the contagion of the Thursday night celebrations.