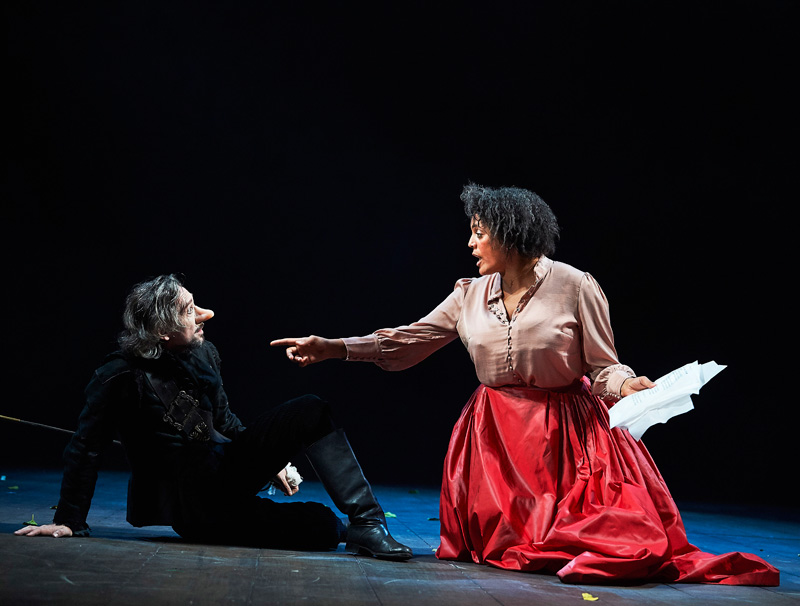 With a tongue as sharp as his sword, Cyrano, by any other nose, would smell pretty bloomin’ sweet. But alas, a sizeable snout mars our hero’s appearance and in turn, his confidence in the realms of love and desire, causing him to hide his true feelings for the beautiful Roxanne.

We meet Cyrano (Tristan Sturrock) and Roxanne (Sara Powell) in the garden of a convent (accompanied by three bearded nuns), where we shall eventually leave them. The audience is transported to the time Roxanne and the gallant, handsome cadet Christian (Patrycja Kujawska) first set eyes upon one another. Lacking the requisite skills of prose to woo an educated woman such as Roxanne, Christian enlists Cyrano to write a series of love letters, which he does in honour of his secret love.

The inevitable meeting of this love triangle takes place under the cover of night; enabling Christian to court Roxanne without her realising that it is really Cyrano’s thoughts he conveys. The tragedy of Cyrano’s agonising unrequited love reaches new heights, falling ever deeper in love with Roxanne.

Artistic director Tom Morris brings together a stellar cast of charismatic Bristol Old Vic regulars and favourites: Felix Hayes, Guy Hughes, Giles King and Miltos Yerolemou race around the main house, whipping off one costume in exchange for another (design by Ti Green), adopting a multitude of voices, accents and characters creating a comedy of chaos and audience engagement that is almost pantomimic. With a score composed by Adrian Sutton and performed by the infinitely talented company, an actual violin (played by Kujawska) is on hand to accompany moments of woe and sorrow.

Oswald’s translation lays the foundations for a mesmerising performance that reaches out to a contemporary audience, yet maintains the melodic poetry of the original. A witty exploration of love-triangles, unrequited feelings, and the hope that people can look beyond the surface. Or in Cyrano’s case beyond the nose.