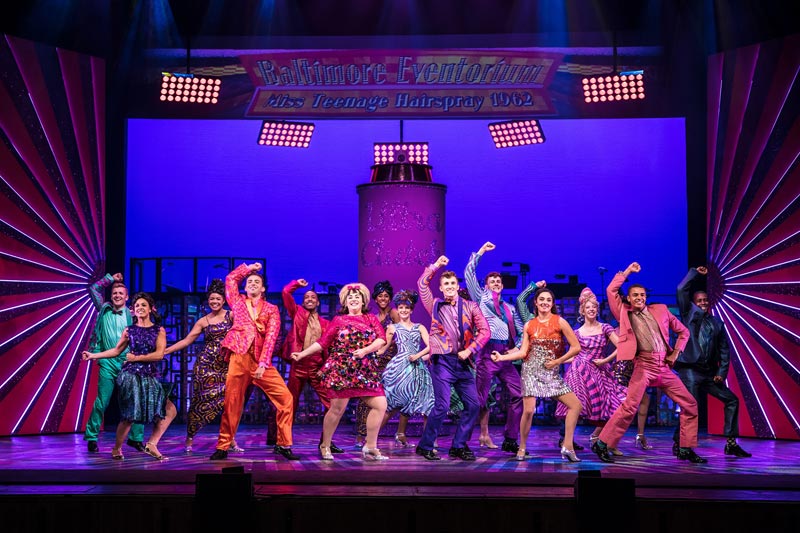 Jessica Hope is transported to the swinging 1960s in Baltimore with Hairspray The Musical, on at Bristol Hippodrome from Monday 5 – Saturday 10 March

“I’m all for integration. It’s the new frontier!” – The honest words of wannabe celebrity Tracy Turnblad that send shivers down the spine of prejudiced dance show producer Velma Von Tussle with the idea of black and white teenagers dancing together on live television.

Set in the early 1960s in Baltimore, Maryland, Hairspray The Musical follows the life of teenager Tracy, an outsider who supposedly doesn’t fit the typical requirements to be on television, who is determined to become a star of a local dance show The Corny Collins Show.

Based on the backdrop of the American Civil Rights era, Hairspray highlights the issues surrounding discrimination and racism, and was inspired by the popular Buddy Deane Show of the late 1950s/early 1960s in Baltimore, where local teens would show off the latest new dances moves and listen to rock and roll bands on a regular basis. Owing to intense segregation at the time, only white teenagers were able to take part in the show except for twice a month when black dancers would be invited to perform, but would have to dance on the other side of the stage to the white teens.

The Tony and Olivier Award-winning musical follows Tracy and her friends as they try to break barriers and eliminate segregation on The Corny Collins Show forever, while taking audiences on a whirlwind of popular music from the era – from rock and roll and rhythm and blues, to Motown and soul.

Rebecca Mendoza is an impressive lead as Tracy, especially as this is her professional debut after only graduating from theatre school last year. With masses of energy, a belter of a vocal range and great humour, she expertly moves between comedy and severity at the right time throughout the show. 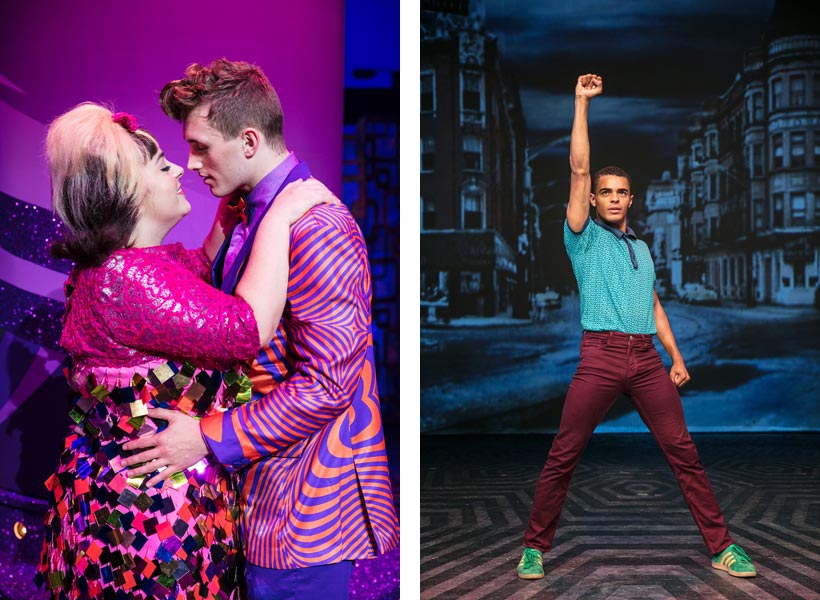 Edward Chitticks has all the allure needed for Link Larkin to melt both Tracy and the audience’s hearts, especially with his sultry rendition of It Takes Two, while Jon Tsouras is suave and polished as dance show host Corny Collins – and can even pull off wearing a pair of bright orange satin trousers.

Some may recognise Layton Williams from his portrayal of overtly camp Stephen in BBC Three’s Bad Education alongside Jack Whitehall, or as drag queen Angel in the recent UK tour of Rent. But, he is a world away from these parts in Hairspray as the sweet-talking, smooth-moving Seaweed J. Stubbs. As well as producing polished dance sequences, hitting top notes while straddle jumping, and charming the audience with his oh-so cool attitude and soulful voice, it is Williams’ developing relationship with the socially awkward Penny Pingleton (played by Annalise Liard-Bailey) that is beguiling to watch. Even when not centre stage, their subtle glances, tentative hand holding and coy expressions in group ensembles perfectly display a blooming, young romance.

Matt Rixon and Normal Pace are absolute ‘couple goals’ as Edna and Wilbur Turnblad. Their sweet rendition of You’re Timeless To Me, a quieter number which could be overshadowed by the more high-powered musical songs, was made even more endearing by some quick-witted ad-libbing that had the audience (and the actors) in stitches.

And it was Brenda Edwards’ powerful rendition of I Know Where I’ve Been as Motormouth Maybelle that had people jumping from their seats and fellow cast members looking on with admiration for such a compelling performance. With ongoing campaigns regarding race relations in the USA, this gospel-inspired protest song still seems pertinent now.

Gina Murray showed just what a West End pro she really is with her performance as the supercilious Velma Von Tussle, especially with her commanding rendition of Miss Baltimore Crabs, and Aimee Moore is on point as her egocentric and shrill daughter Amber.

However, despite addressing themes such as body image and racism, it did seem somewhat unnecessary to have the female gym teacher and police officer making pervy jokes that fell rather flat on the audience.

And the impressive powerhouse trio The Dynamites certainly didn’t get enough stage time – Emily-Mae, Melissa Nettleford and Lauren Concannon exuded a calibre of Motown that The Supremes would have been proud of. Being such young, soulful singers, could we be looking at a future Dreamgirls trio?

Hairspray The Musical is colourful, uplifting, and good fun for all ages – and addresses issues that are still being contended with today.

You won’t be able to stop the beat with this production … the songs will be stuck in your head for days – and I’m totally fine with that.