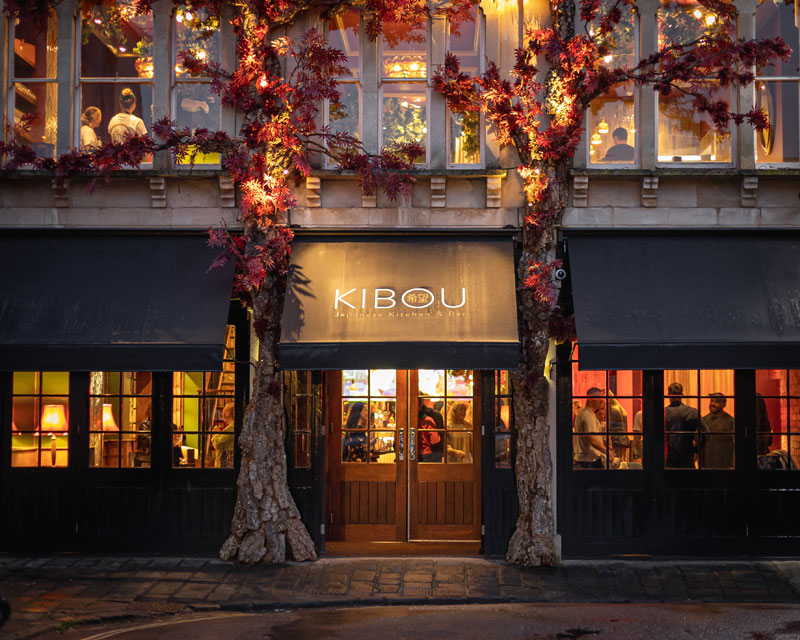 From humble beginnings to ever-growing success, we book a table at Clifton Village’s popular newcomer to discover the magic within…

It’s six o’clock on a Thursday evening. It’s dark, the heavens have opened, Bristol’s roads are heaving with rush-hour traffic and the thrum of the wipers is dominating the conversation. As we make it up to Clifton and turn into the King’s Road, the sight of KIBOU almost takes us by surprise. Adorned with a beautifully intricate burgundy Japanese acer tree, which weaves itself up and around the first floor windows, our expectations are immediately met, and exceeded. The warm glow from within gives it an almost irresistible allure on this cold October evening.

Having grown up in Cheltenham, I knew the name KIBOU well. It started from humble beginnings tucked away in a basement space in the centre of town. Its food, however, was always divine. Before it moved to a bigger, street-level venue and expanded to London and Bristol, KIBOU truly was a hidden gem that, once discovered, was a joy to experience. Through expansion, it hasn’t lost its touch. The Clifton branch – previously the Nettle & Rye pub – possesses all of the qualities that die-hard fans hold so dear. Brimming with natural life, it’s hard not to be amazed by the finer details, the authentic décor and the projector animations depicting a more modern side of Japan – and that’s all before you’ve even seen the menu.

Once shown to our table, the KIBOU signature cocktail was a no brainer. Comprising of gin, bergamot, lychee liqueur, rose vermouth, bitters, lime and sugar, it is one to savour, if you can. It also arrives in the most ‘Instragrammable’ glass you ever did see (pictured – I say no more).

KIBOU features a standalone bar, meaning its drinks menu is extensive. Offering an ambitious selection of Japanese whisky and sake along with Japanese-brewed beers, authentic high-balls and cocktails, it’s a great place to kick back any day of the week. The menu itself centres on showpiece sharing platters, which is where this restaurant really earns its stripes. We opt for the 20-piece Jo Moriawase – a delicious mixed selection of sushi and sashimi chosen by the chef, which is easy to manage between two people. The plate is lined with mixed seafood California rolls, nigiri, tuna and salmon sashimi, and spicy tuna and avocado temaki.

To accompany the platter, we pick a steaming bowl of vegetable ramen with firm tofu and seasonal vegetables in a tasty broth; softshell crab tempura bao buns with crab sauce; pumpkin croquettes topped with tonkatsu sauce, vegan sriracha mayo and aonori (a personal favourite); and a soy and honey-dressed salmon sashimi poke bowl. Stuffed was an understatement, but enraptured was one too.

A couple of short moments later, we were ready for dessert. We devoured a chocolate ganache topped with sesame mousse and chocolate soil – as well as mini cinnamon and apple dumplings with vanilla ice cream and salted caramel sauce. What I love about the menu is the extended vegan offering now available. Whether you’re a meat-eater, a veggie, a vegan, dairy-free or gluten-free, KIBOU caters to all Japanese food-loving tastes and dietary requirements and offers everyone something special that will tickle your taste buds.

The service was faultless and the staff – lovely and laid-back – were on point with their recommendations. Ultimately, it’s a delight to see KIBOU back on our doorstep. A firm favourite in my hometown, I have no doubt that its reputation will continue to soar.

Is it still raining? I hadn’t noticed…

All photographs by Nic Crilly-Hargrave

Previous
All Wrapped Up: return of a Christmas tradition at the Bristol Audi showroom

Next
Deck Your Halls: expert tips on how to dress your home for Christmas