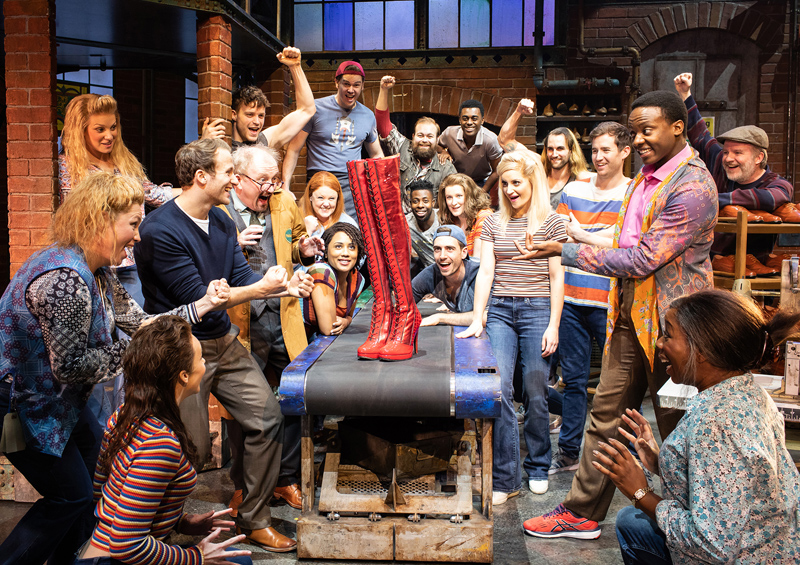 Following more than 1,400 dazzling performances, Kinky Boots packed its bags and closed the doors to the Adelphi Theatre in January after three years on the Strand. After snapping up countless rave reviews and an Olivier Award for Best New Musical in 2016, the West End has lost a touch of sparkle and serious sass that this musical brings.

But fear not as the musical is now strutting its six-inch heeled stuff around the UK on a national tour until November – and is filling the Bristol Hippodrome with the fun of the Price & Son factory until 9 March.

Inspired by a true story – which influenced the plot of the 2005 film Kinky Boots starring Chiwetel Ejiofor, Linda Bassett and Nick Frost, and featured in the BBC documentary Trouble at the Top in 2008 – it follows the life of young Charlie Price, who is left to run his family’s shoe factory in Northampton which is on the brink of closing down. In a quandary about how to save his workers’ jobs and his dad’s legacy, during a surprise encounter he meets Lola – the brilliantly salubrious drag queen – and discovers that making high heeled shoes for men might just be the niche market that he needs to maintain the factory.

With songs by Grammy and Tony-winning pop icon Cyndi Lauper (Girls Just Want to Have Fun), and direction and choreography by Jerry Mitchell (Legally Blonde, Hairspray), this is a feel-good production that will have you toe-tapping and smiling all the way home.

With slick scenery changes (designed by David Rockwell) and impressive costumes (the Beefeater runway outfit was a particular favourite) by Gregg Barnes, it’s a feast for the eyes, as well as the ears.

Taking on the challenging role of Lola is the wonderfully charming and soulful Kayi Ushe, who knocks out outstanding vocals time and time again, and whose stage presence reverberates around the auditorium. Confident, commanding yet compassionate, he shows how Lola is a true leading lady of the musical theatre world.

Joel Harper-Jackson is engaging as the good-natured Charlie, determined to show the world that he can do something right when he puts his mind to it, while Adam Price is utterly endearing as supportive, long-serving factory-runner George.

The ensemble of factory workers are strong, but it’s Lola’s Angels (her entourage of all singing, all strutting drag queens) who are as impeccable as their flawless dance moves, high kicks and cartwheels – all executed in the highest and most colourful of heels (they wear 46 pairs between them!). Their dance moves are faultless, even when challenged with using factory ladders and conveyor belts as part of the choreography.

Kinky Boots is an all-round upbeat, enchanting and high-kicking musical, with bags of sass. Just as Lola might say, the world definitely seems brighter six inches off the ground with this production.

Next
Property: Why it is a great time to sell in Bristol
Start typing to see results or hit ESC to close
bristol gender film history tv
See all results