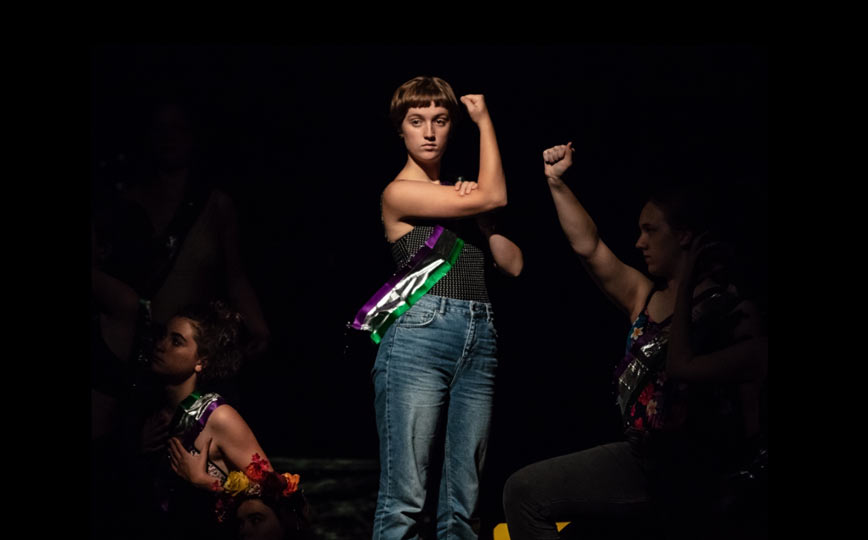 Frida Kahlo, Marie Curie, Beyoncé, Ada Lovelace, Margaret Thatcher, Rosa Parks, Joan of Arc – an artist, physicist and chemist, multi-million record-selling singer, mathematician, Prime Minister, civil rights activist, icon of the Hundred Years’ War and Roman Catholic Saint. These women couldn’t be more different in terms of their careers and life experiences, as well as the decades (and centuries) they were born in.

And yet these are just some of the women who have made an impact on history – history which is dominated by the stories and glories of men – and inspired future generations. These women have been inspirational indeed, especially to the young women of Bristol Old Vic Young Company who have been marking the centenary of the passing of the Representation of the People Act in Britain by exploring the legacy of women’s suffrage and the impact it has had on the female population in this unique production, Make More Noise.

The cast, made up predominately of ages 11–25, move smoothly from one topic to the next – be it body image, periods, discrimination, being able to vote – through montages of discussions, re-enactments, dances and tableaux. Each topic is skilfully broken up with members of the cast reminiscing about their grandmothers, aunties, mothers and friends, reflecting on how they have inspired them, given them advice, and passed on important feminist messages.

One stand-out scene features one of the cast discussing how irritated she felt the first time she went to vote, looking down at the voting sheet and reading all the names of the male candidates. “How could all these men understand what I’m going through?”, she states. As she reflects, the harrowing gallops of the king’s horse echo downstage as suffragette Emily Wilding Davison is knocked to the floor – a disturbing reminder of the importance of making our votes count, and our voices heard.

While Make More Noise pinpoints the struggles women have encountered over the years, the cast use humour in inventive ways to depict the ridiculousness of some female experiences in the past, and today. The scene depicting what we would term a period drama – i.e. a woman dressed in Regency clothing looking oh-so elegant, looking wistfully into the distance while a man declares their un-dying love – wittily turns this term on its head. For women, periods do in fact mean drama.

With clever costume changes, rousing music, and a simple set design, the cast effectively shift throughout time periods and scenarios.

Make More Noise also quite rightly addresses the fact that the cast are aware that the majority of those onstage are made up of white, privileged women, and highlights how those who are in advantaged positions must use their situations to help others in the fight for equality.

This production certainly made plenty of noise – stirring, thought-provoking, sensitive and skilful, the cast are a testament to their sex and the legacy of the suffragettes and suffragists who campaigned for the vote a century ago. Inspiring, uplifting, and superbly executed, Make More Noise celebrates equality and challenges anyone who thinks otherwise.

“You have to make more noise than anybody else,” suffragette leader Emmeline Pankhurst once said. These women are undoubtedly using their voices, and no one is going to step in their way.

Next
Folk on the water: boat-dwellers on the life aquatic