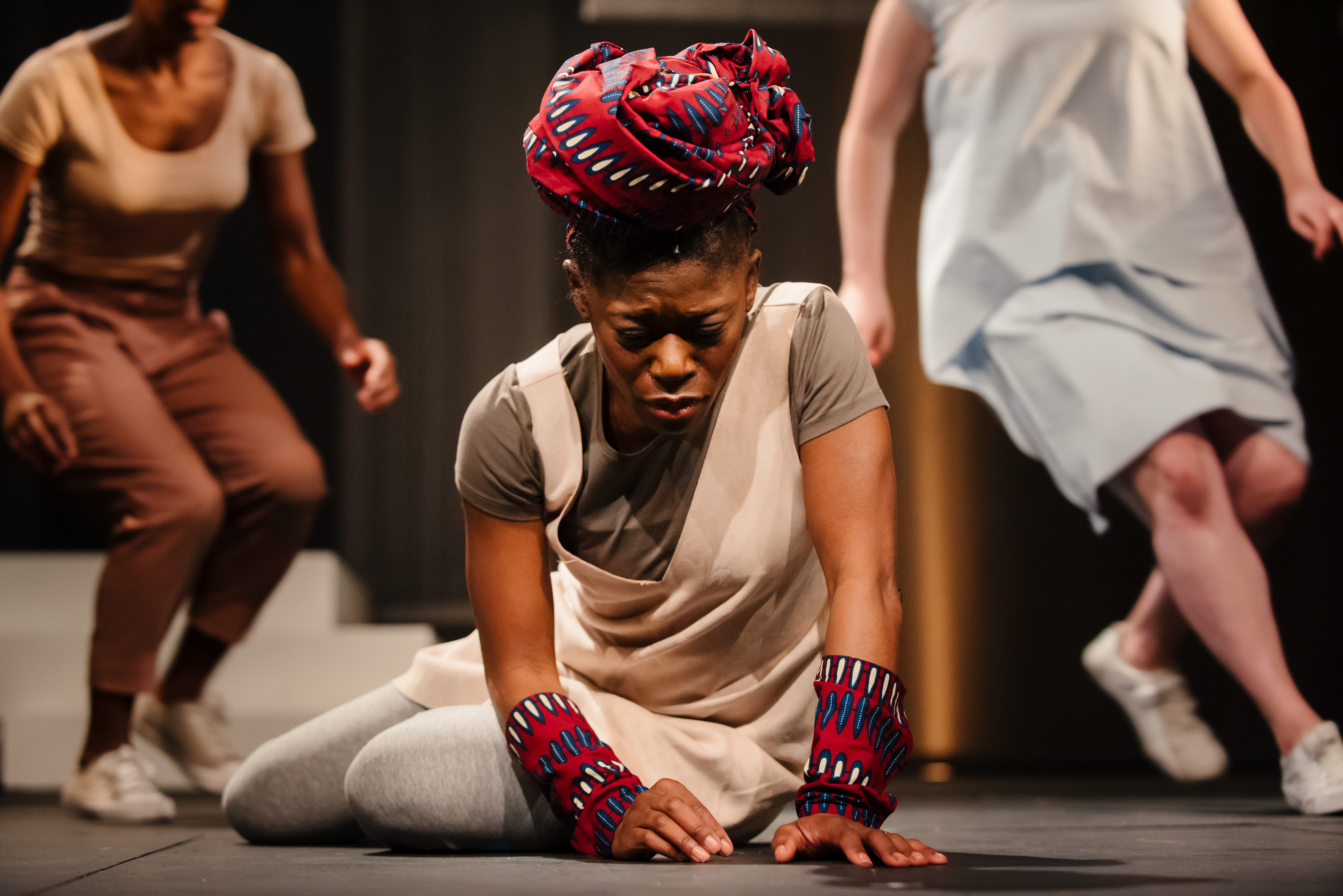 The phrase ‘hell hath no fury like a woman scorned’ simply doesn’t cover it when it comes to Euripides’ Medea. The classic Greek tragedy embodies the concepts of betrayal and revenge in their most extreme forms, with stomach-churningly gruesome results – perhaps not the first choice for a light-hearted trip to the theatre.

But Bristol Old Vic’s interpretation tempers the brutality of the original Greek play with the juxtaposition of a modern tale – that of single mother Maddy. A small-town girl who meets the love of her life at 19, Maddy was living the middle-class suburban dream – ‘I even shop at Waitrose!’ – before the infidelity of her husband Jack plunged her life into chaos. Leading lady Akiya Henry (Medea/Maddy) is captivating from the moment she appears, weeping and vulnerable on the sparse stage, surrounded by the chorus and shrouded in white linen. Following the dream-like opening scene, writer Chino Odimba cuts to the chase, deftly establishing a witty, intelligent and deeply wounded Maddy. Despite speaking in rhyme, in keeping with Euripides’ play, Maddy’s soliloquy is less Pam Ayres and more street-smart performance poetry, addressing the audience directly and explaining her situation with lashings of sarcasm. Maddy wakes from her fitful sleep in the opening scene, clutching a copy of Medea, image © Jack Offord

Once a copy of Medea falls through the desperately unhappy Maddy’s letterbox, the ensuing dialogue between ancient Greece and present day is seamless. Subtle changes in lighting, scenery and costume are woven into the text, deftly avoiding any jarring or tacky ‘flashback’ effects – a testament to Chino Odimba’s skilful writing and evidence of close collaboration between everyone responsible for the production.

Though Akiaya Henry’s powerhouse performance takes centre stage, ranging the full gamut of human emotion with harrowing realism, there is no dearth of talent from the five other members of Medea’s all-female cast. Standout solo performances come from Jessica Temple, whose impressive, soulful vocal as Medea’s nurse/Maddy’s friend Naomi would be at home during a gospel sermon, and Michelle Fox as the suitably sassy Baliff/King Creon and well-meaning King Ageus.

As the vengeance-filled story unfolds, the chorus’ precisely choreographed (and no doubt meticulously rehearsed) clicks, claps and stomps mirror the intrinsic musicality of the play, resulting in a rhythmical, atonal soundscape which varies in character to suit the foreground dialogue – a technique which adds weight and movement to the climactic revenge scenes, and eerie tension during moments of reflection and sadness. This is, first and foremost, a story about feminism. Odimba has breathed new life into Euripides’ play, casting Medea in a fresh, relatable light as a victim of the privilege of men. Maddy is made to feel guilty for her overly ‘emotional’ reaction to love-rat Jack; Medea is threatened with banishment for interfering with her husband’s ‘beneficial’ engagement to a young, pretty princess. Both are encouraged to comply, to stand down and even to obey the men who have betrayed them – which, everyone agrees, would be the much easier option.

The result is a deep-seated, primal, physical anger, which has husbands, boyfriends and brothers visibly squirming in their seats, while females in the audience clap, cheer and cackle with every witticism and attitude-filled hair flick. But despite the empowering message and laughs at the expense of male characters, this isn’t just a story for women. If you’re brave enough to see this production through to its equally gruesome and profound conclusion, you will discover a deeply touching tale of friendship, loyalty, identity and loss.