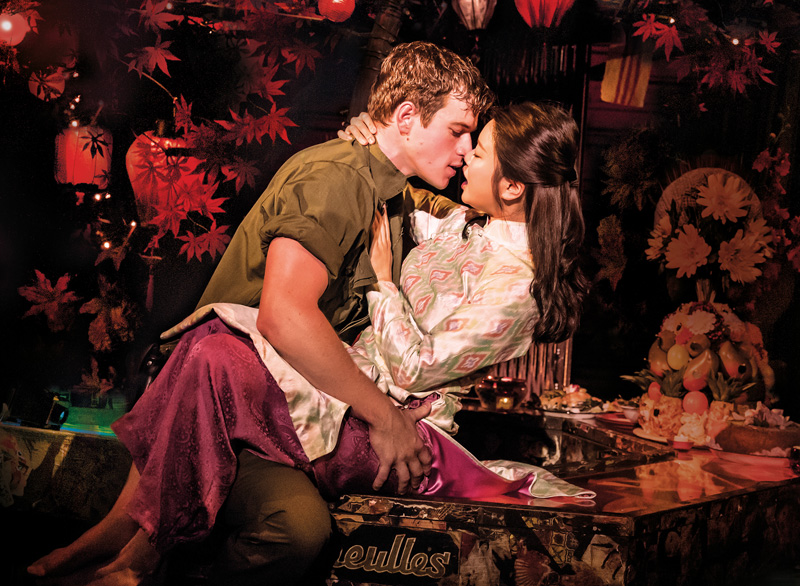 When Miss Saigon first opened in the West End in 1989, the horrors of the Vietnam War were still resonant in people’s minds. Despite the conflict ending 14 years prior to this, many of the audience members still recalled the difficult aftermath that ensued once Saigon had fallen in 1975: the lists of the thousands of dead soldiers and civilians; the faces of countless mixed-race children left father-less after American soldiers were evacuated from the East; the displaced families with their limited belongings, scrambling for boats, trying to find a new life elsewhere.

With the Vietnam War barely making a mention in the national curriculum nowadays, the modern audience member’s knowledge of the conflict may be a little hazy. But the themes of this award-winning, box office-smashing musical are all too familiar today with current conflicts happening elsewhere in the world.

Coming straight from Broadway for a UK tour, this is Cameron Mackintosh’s third adaption of Miss Saigon – and, oh, is it a biggie. The production value is immense and even includes a three-ton helicopter right above the stage, which by the end of an eight-show week would see its rotor blades spin a remarkable 3,600 times.

Miss Saigon follows the life of 17-year-old Kim during the last days of the Vietnam War. She is forced to work in a seedy bar, ironically called Dreamland, run by a man with a notorious reputation known as the Engineer. Kim meets and falls in love with an American GI, Chris, and they marry but are quickly torn apart following the fall of Saigon and evacuation of US troops. Three years later we watch Kim longing for Chris’ return, all while little does he know that he has fathered a son. 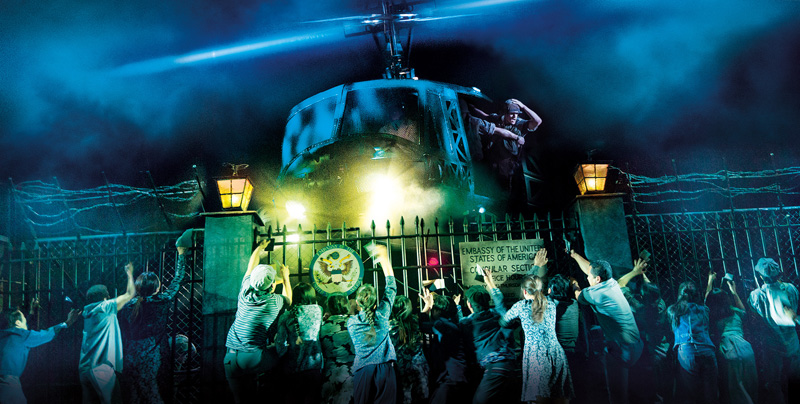 The iconic helicopter scene during the Fall of Saigon, image: Cameron Mackintosh

Sooha Kim is compelling as naive Kim, who transforms from inexperienced teenager to protective mother when the life of her son is under threat. Red Concepción is an absolute pro with his mix of utter sleaze and comedic charm as brothel-owner The Engineer, totally owning the stage in big numbers such as The Heat Is On and The American Dream.

Ashley Gilmour is genuine as US GI Chris, who becomes disenchanted with the sordid bars and brothels of Saigon, frustrated by the length and pointlessness of the war, and becomes ridden with guilt after he leaves Kim to return to the US.

This production doesn’t let up with the incredible array of quick staging changes, feast-for-the-eyes costumes, and emotive lighting and strobe effects. The ensemble has spectacular execution of big dance numbers such as The Morning of the Dragon, and the drama of Kim’s Nightmare – with the pushing and pulling of the city’s gates, the desperation of people struggling to get out of Saigon, and the almighty scramble for the helicopter – shows just how formidable this production really is.

While the elements of bawdiness and comedy will make you smirk, Miss Saigon will take you across the whole spectrum of emotions, right up to the tragic conclusion.

Next
Garden Affairs: Room To Be Creative