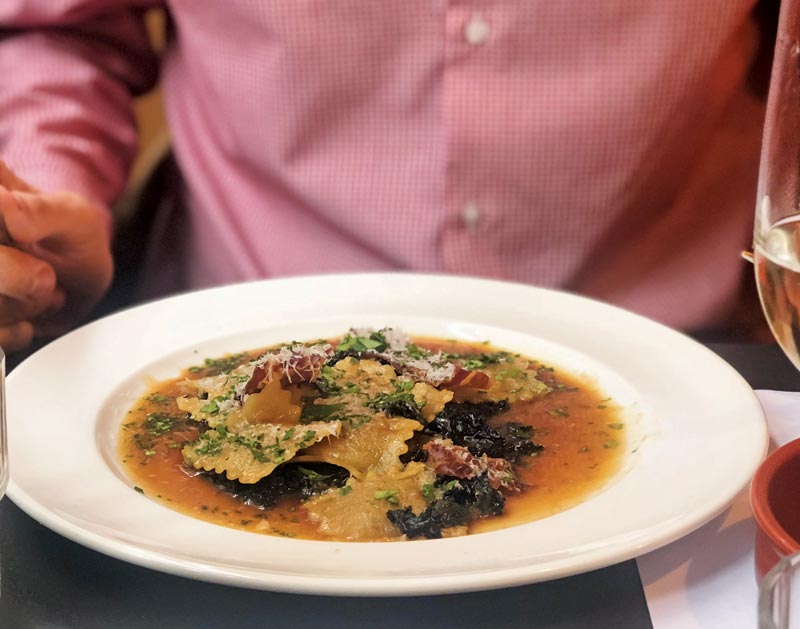 Amanda Nicholls engages the whipcrack reflexes usually reserved for procuring Glastonbury tickets to get a table at the hottest new opening in town, for some lunchtime carb-loading

Butternut and sage, basil pesto, beef and red wine, pumpkin and amaretti; we’ve tried every kind of fresh filled ravioli, girasole, tortelloni and mezzelune going in the supermarkets’ posh ranges as our addiction to the stuff – which we’ve been harbouring over the past year or so and failing to keep in check – has intensified. We ordered a pasta machine to attempt our own rudimentary parcels at home when it was Sunday past 4pm and the shops were shut but the need for a fix was strong.

We now know we’re not alone in our obsession, since the most popular pasta restaurant in town – Pasta Loco – announced its second, city-centre venture would be the UK’s first fresh stuffed pasta restaurant, dedicated to ravioli and all its close relatives. It prompted a level of excitement pretty much unprecedented on Bristol’s indie food scene, with hundreds of calls and booking attempts made before the paint on the place had even dried – the phone may or may not have been unplugged for a short while in favour of drawing breath, we’re told. 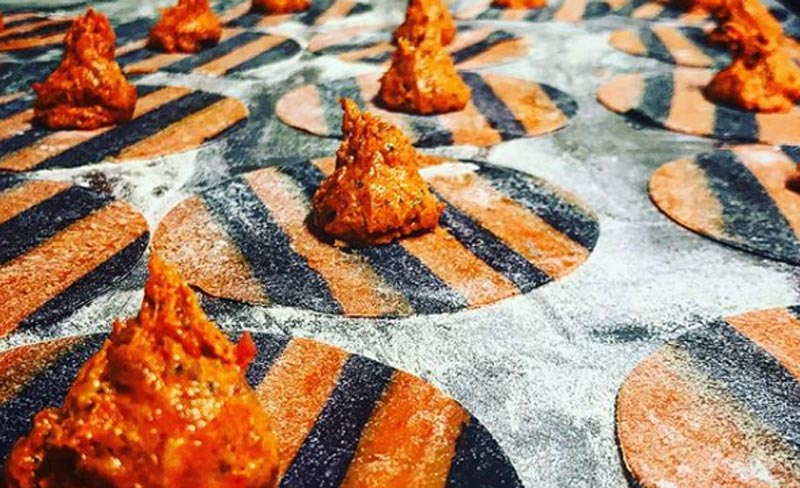 There’s still a ‘wet paint’ sign on the door when we arrive at what was once Mr Wolf’s bar and noodle house – where Pasta Ripiena’s owners once partied on the regular – to take advantage of the weekday lunch deal (two courses for £13.50 or three for £16 – boom).

Simple yet vibrant is the modern Italianate decor; the charcoal windowsill populated with potted plants and posies of wheat. They put us in mind not only of golden Tuscan hills but also old Mrs May – feeling almost as naughty, indulging like this on a Tuesday lunchtime, as the former PM must have on that girlhood day, skipping through the fields of grain. Beside little red espresso cups stacked in a line and looking out to St Stephen’s Street, bright tangerine bottles of Aperol are poised to tempt.

“…Could be that reading minds is part of the job spec: we know one of the aims is to elevate hospitality to an art form…”

Forgoing the latter in favour of some lighter lunchtime fizz, we feast our eyes on chef Joe Harvey’s succinct menu and single out the Argentine red prawns. Cooked on the plancha with aioli and Amalfi lemon – the latter’s taste and aroma still indelibly imprinted in my memory after a visit to Ravello as a teenager – the fat, juicy shrimps pique our appetites perfectly. Still they’re overshadowed by a second choice of Sicilian spring tomatoes – flown in weekly from “the motherland” by small Clevedon importer Nanona – with smoothest goat’s curd, crispy pasta fritti and garden-fresh basil salad, which has our mouths humming with flavour. As far as foodie foreplay goes, this is pretty sensual.

My heart, thudding slightly in my throat as the ripiena arrive (possibly I should get out more), is glad when we see pretty platefuls looking as dreamy as promised by previews circulating on Instagram. First up is the dry-aged beef shin ragu variety with crispy pancetta, red kale and pecorino – the meat cooked to perfection within its pasta packaging, the pancetta adding crunch and contrast, the red kale contributing all the sweetness missing from its trendy green sibling’s flavour profile, in our experience at least. We’ll be growing that on the allotment this year, decides dining partner R. Alighting upon the table seconds after is salt cod and squid ink ravioli with a sumptuous moat of crab, cream, River Exe mussels and agretti, or monk’s beard – the rounded needles of the veg, similar to samphire in shape and saltiness, threading in and around the black cushions of inky pasta and their habit-forming seafood stuffing.

Just as dinner-table discussion turns to whether it’s acceptable to raise our plates and tip them towards our open jaws – we reckon the guys here would be cool with it – chunks of soft, airy foccaccia arrive for our sauce-mopping convenience.

“…We watch a couple rebook on the way out, just as if they were at the dentist, and realise a return is a foregone conclusion…”

Could be that reading minds is part of the job spec here: we know one of the aims is to elevate hospitality to an art form and it’s something front-of-house don Dominic Borel has been honing since day one at Pasta Loco – his job made easier by the consistently cracking culinary output of cousin Ben Harvey’s kitchen. Now Ben’s brother Joe, who earned his stripes at the likes of Bellita and Bell’s Diner, is doing him the same courtesy with his exceptionally tasty take on Italian cuisine. He’s just as down to earth as Ben and Dom – they’re the kind of lads you quite fancy having a lock-in with – and he explains that the menu won’t be as ‘loco’ as his brother Ben’s daily changing bill of fare.

“I like a bit of stability,” he smiles, making the point that the longer the dishes are on the menu, the better they will become. I for one am glad the salt cod could be sticking around a while longer.

With reminders of their Bristol family history dotted about the place – in the bathroom is a framed image of ‘Nonna, Anna, Vittoria and Claudina’ at the Llandoger Trow where they worked in the ’70s – we realise we’re rooting for them because of how homegrown the outfit feels, as well as the gosh-darn good grub. We’re thankful they’ve upgraded the Mr Wolf’s toilets too… 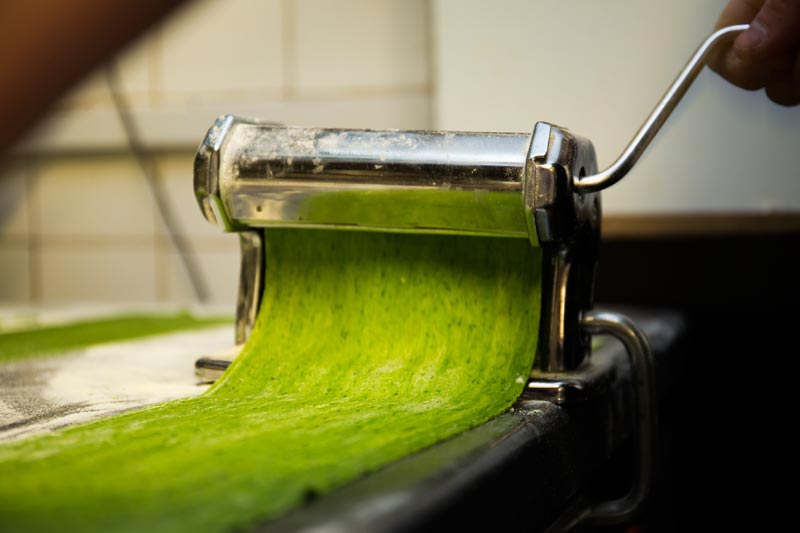 Sinking spoons into a dainty dessert of pistachio and extra virgin olive oil panna cotta, more than adequate in its wobbliness and with just a hint of neutral, nutty sweetness, we watch the couple from the next table rebook on the way out, just as if they were at the dentist, and realise that for many diners here, a return will be a foregone conclusion.

Given the widespread attention they’ve received and the buzz surrounding the new opening, it would be easy for the team to take the mick but the lunch menu especially feels like great value for money for its high quality – it helps that they’re already booked up weeks in advance, we suppose.

With their small but perfectly formed restaurants – both Loco and baby sister Ripiena – the boys have breathed such life into this style of food; taking Italian from its regular realm and respinning it into imaginative, innovative cuisine while keeping family cooking at the core. We’ll never get our stuffed pasta habit under control now – but we’re at peace with that.