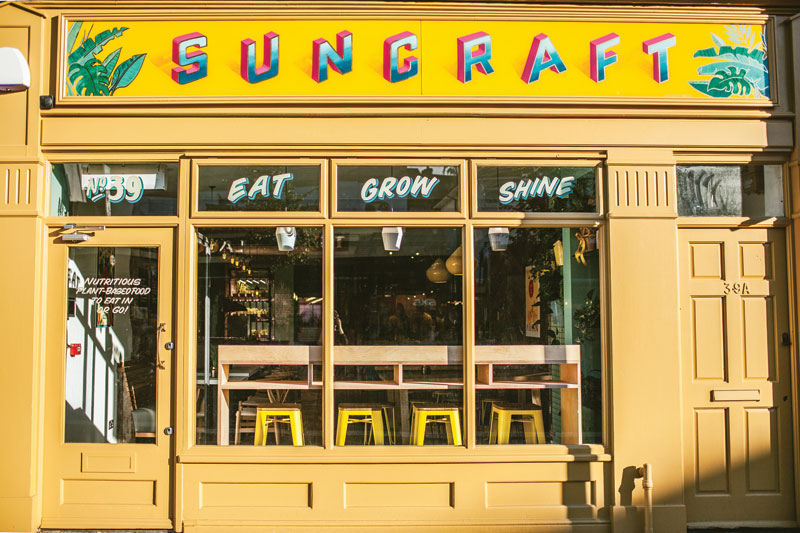 Embarking on Veganuary and keen to in no way compromise on flavour? We fully recommend a trip to – or takeaway from – this lovely plant-based place. Words by Amanda Nicholls

The role restaurants have to play in creating a more transparent food system is a topic that’s popping up more and more often. Last March, the Sustainable Restaurant Association’s One Planet Plate campaign saw several Bristol restaurants promoting special dishes with impeccable ethical standards and more clearly labelled menus to make it easier for diners to make sustainable choices. In September, there was a city first when James Koch of The Gallimaufry enhanced Gloucester Road’s exciting vegan scene by opening Suncraft and partnering with innovative urban farmers Grow Bristol to create an in-house hydroponics system for growing ingredients, from spinach and pak choi to edible flowers and Japanese mustard leaves.

Holding around 140 plants, the ‘vertical growing’ unit is a self-regulating system using zero pesticides, creating an optimum environment for quality, fast-growing produce beside Suncraft’s kitchen and as such, right next to the point of consumption. Saving on water use and carbon footprint, it also gives chefs and staff a connection with the leaves and herbs they use on a daily basis.

Sure, they can only grow a fraction of the food served but it really is the thought that counts, encouraging conversation about the importance of local food and sustainability; it did, at least, when we were there, among the recycled yoghurt pot tables and reclaimed wood that make up the restaurant and takeaway’s interior. The team translate their ethically-mindedness throughout, using very little plastic (opting for reusable glass containers and bottles) and adding an optional 20p to dine-in customers’ bills in return for unlimited filtered still or sparkling water by Belu; who pass on donations to WaterAid which transform lives worldwide with clean water.

There’s plenty of deliciousness to back up the noble credentials too, don’t you worry. And if you’re embarking on Veganuary but keen to in no way compromise on flavour, this is the plant-based place to visit – for the little injection of sunshine that emanates from its tropical lemon and cyan decor, and rich, nourishing foodie flavours.

It was an ask, choosing between rich and spicy gochujang stew with
Korean rice cakes, courgette, spring onion, sesame, tofu and kimchi with rice and cucumber namul; dumplings with parsnip mash; and tenderstem broccoli and GABA rice salad (the sprouting process of this brown rice, allowed to germinate to improve flavour and texture, is said to increase the content of important neurotransmitter gamma-aminobutyric acid which affects brain, organs and muscle tone).

We were glad of the glossary of ingredients/methodology commonly found on chef Kane Danaher’s Asian-inspired menu; allergens clearly highlighted on the laminate. The majority of dishes, which change up every three months based on the availability of ethical produce, were also gluten-free, we found. Eventually we settled on spiced potato and spinach cakes with black-eyed curry with fennel, radish and mint salad and mustard. Sides sounded equally tempting – we could almost hear the crunch of kohlrabi, carrot and green mango salad as we read the words aloud – and a plate of piping-hot fried tofu in Vietnamese tomato sauce and fresh herbs was soon proposed.

Wholesome, hearty, fresh and well-balanced, the potato and spinach cakes seemed all the lighter accompanied by the radish salad, which, we admitted, we would never have thought to pair up at home but certainly would in future. Supping on an organic wine and kombucha – the drinks list also includes beers from Wiper & True and freshly made cold-pressed juices, and may soon feature homemade probiotics – we turned to dessert. Carrot kheer, a popular pudding in the Indian subcontinent, was cool and mild, with coconut yoghurt, pistachios and almonds, aromatic saffron and cardamom, and both sweet and savoury flavours to commend it. Small, dense pecan and cinnamon pancake had similar sweet-savoury traits thanks to its ambrosial (and opinion-dividing) companion of homemade black-sesame ice cream. On the whole, we left with high hopes for the direction of our local restaurants in 2019. To visit Suncraft is to be heartened and encouraged by forward-thinking foodies at work around the pass and behind the scenes – do it, do it now…