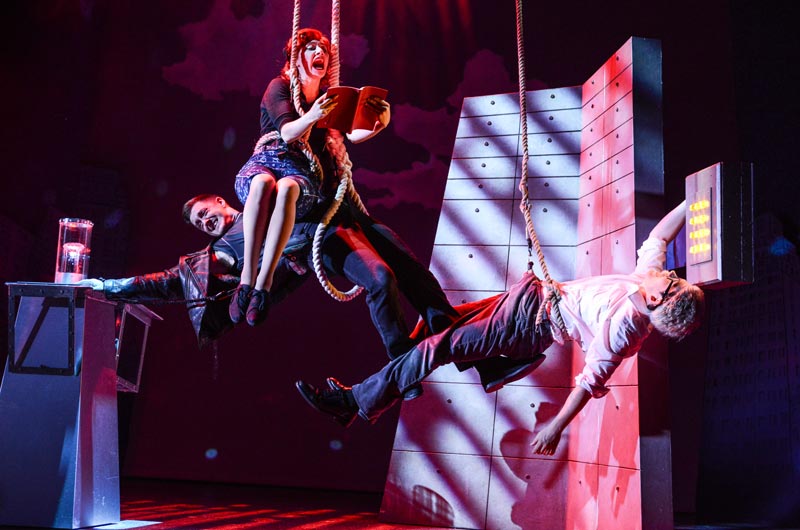 Review: The Comedy About A Bank Robbery at Bristol Hippodrome

Jessica Hope laughs her socks off at The Comedy About A Bank Robbery, on at Bristol Hippodrome until 16 February

With a bundle of Oliviers, WhatsOnStage, Broadway and Tony awards under its belt, it would be fair to say that the comical masterminds behind Mischief Theatre Company are tickling the funny bones of every theatre goer with their award-winning productions across the UK and US.

Picking up the Olivier for Best New Comedy in 2015 for The Play That Goes Wrong, writing trio Henry Lewis, Jonathan Sayer and Henry Shields have received rave reviews for their sharp comedic timing, imaginative physical comedy, and quick-witted storytelling. And with the recent announcement that Mischief Theatre will be opening a new comedy – Groan Ups (ha, see what they did there?) – at Vaudeville Theatre in September, it looks like the demand for belly laughs and light relief certainly isn’t going away.

Following its resounding success on the West End, the company’s The Comedy About A Bank Robbery is currently on UK tour. It follows the antics after a city bank in Minneapolis is entrusted with the protection of a rare diamond belonging to the Hungarian royal family ahead of Prince Ludvig’s state visit. Little do the royals know that everyone in the town is a crook and even the security guards can’t be trusted…

David Coomber as the amateur dramatic-loving and corrupt prison guard Neil Cooper executes his lines brilliantly, and you can’t help but love him despite his relentless blunders. Understudy Tom Hopcroft shines as pick-pocketer Sam Monaghan (usually played by Seán Carey). His delivery is superb, with his attention not wavering despite performing some of the most physically demanding scenes.

Julia Frith is charming as the gold-digging scammer Caprice, while Damian Lynch is excellent as the frustrated bank manager Robin Freeboys, who tries to conceal his past of fraud, indecent portrait paintings hanging in the staff room, and sex therapy.

George Hannigan is masterly as a host of different characters – from prisoners, security guards, to playing three of Caprice’s love interests all fighting one another at once, his precise physical comedy is exceptional; and Jon Trenchard is endearing and delightfully funny as the sweet, old bank intern Warren Slax.

With intelligent wordplay (is it Robin Freeboys? or “robbing three boys?”), skilful set changes (the bird’s-eye view set design from the air conditioning vaults is particularly impressive), and intuitive use of props (poor Simon the seagull), Mischief Theatre demonstrates that it is at the theatrical forefront of combining modern-day slapstick humour with astute, original writing.