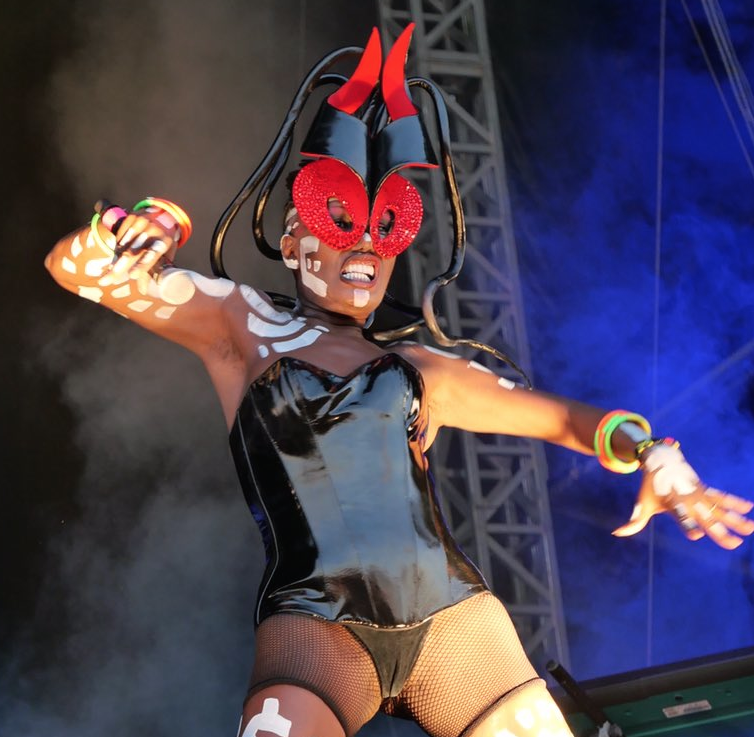 Grace Jones was the tonic we didn’t know we needed: thoughts on the fourth instalment of The Downs Bristol

In all honesty, we didn’t waltz onto the Downs with the usual vim and brio that we usually do. Slightly lobotomised after a morning’s helpless scrolling through current affairs on social media (note: how not to go about a relaxing Saturday lie-in), we dutifully fastened our little pink wristbands but the carefree ferris-wheel riders and happy helter-skelterers, enjoying the fine weather at the Seawalls site, felt incongruous.

A few minutes in, the feeling was dissipating; Nightmares on Wax doing a nice job of pulling us out of the torpor and warming the crowd over on the Avon Stage and a sugar hit of chocolatey churros doing the trick too. Straight after, while house/disco purveyors Crazy P dished out some effervescent electro – the new stuff not without its own political undertones – it was all brilliantly raw, anti-fascist energy on the main stage where Bristol’s prize musical export, Idles, were performing their final festival show of the summer after an incredible year including a world tour and Brit nomination. They treated hordes of hometown fans to charged, memorable versions of Build Me Up Buttercup and Nothing Compares To You as well as original favourites such as Mother and Danny Nedelko, during which Danny (frontman of fellow Bristol act Heavy Lungs, who headlined the Idles-curated Late Night Live stage) got up and joined them.

During the stage-gear switchover we lay on the grass imagining a backstage meet between post-punk’s good guys and Grace Jones, who followed on the bill, and wondered whether they might have made a nice amuse-bouche for the fantastically formidable fashion icon, actress and singer, before she emerged to devour her own hour of audience adoration.

Our only regret with Grace was not swotting up on her back catalogue so we could give her the best of our lung capacity in return for the blast of pure, life-affirming entertainment she delivered. “Is that the sun I can see? Do we really need that much light, darling?” purred the septuagenarian – sashaying into the start of slinky Iggy Pop cover Nightclubbing – although you’d not think she was one to look at her. She still resembles a walking sculpture at 71, moving around the stage like a lithe and gloriously elegant predator. “Put a leash on me,” she advised as drumming talent Drew took the band into Pretenders tune Private Life, followed by Warm Leatherette, when Jones went full powerhouse, crashing away on her own set of cymbals.

There was a costume change, or at least an arresting new headdress, for every song, complete with amusing off-stage narration. “Cover your children’s eyes!” came her disembodied warning before she stalked back on stage in Jamaican colours and a black strap-on for My Jamaican Guy... Next up was a rendition of church hymn Amazing Grace, stirringly sung while pole dancing and spanking poor Jane from wardrobe, who had zero choice in being dragged out on stage. “I know we’re running out of time, but don’t you dare pull the plug on me,” she hissed towards the sound desk.

If they had dared we’d have missed out on her big hit Pull Up To The Bumper; throughout which all eyes were, for once, not on Grace, suddenly with white Pegasus-like mane and riding crop, but on dancer/Adonis Nico Modestine, basically sporting only body paint in tribal patterns and displaying jaw-droppingly impressive feats of human strength on the pole. Slave To The Rhythm saw her pull back the spotlight in a sparkling silver bowler hat, casually hula-hooping her way through the whole song.

The Downs Bristol team have worked hard every year since the festival’s inception in 2016 to create a programme of diversity and debate (this year saw panel discussions on climate change and an exhibition of the recent St Pauls Carnival, with the Information Stage teaming up with The Big Issue, Protect Our NHS, Extinction Rebellion and Caring in Bristol) and 2019 was a hugely successful two fingers to festival convention with its all black and majority female headliners.

Best in the young and gifted category was Loyle Carner, whose uplifting set, with its energy, charisma, humour and shout-outs to the city and its musical talent, was lapped up. Even Lauryn Hill, expected by some to disappoint, didn’t disappoint – at least in terms of musicality. She appeared on stage at pretty much the correct time, after DJ Reborn, who acted as hype girl, and the band were tight – likely due to sheer fear of being fired if they put a foot wrong.

The petite songbird, drowned in double denim, spoke of her experiences of motherhood (when she mentioned her six offspring we couldn’t stop the image of a Von Trapp-esque troupe springing to mind). She cited the legendary musicians, like Aretha Franklin and Donny Hathaway, that had inspired her to create her hip-hop-infused neo-soul – we only wished she had absorbed some old-school professionalism too. Furiously gesticulating at her sound engineers every second she could feasibly turn away from the mic, she made stressful, distracting viewing of what was a perfectly good gig in every other way, with vocal output very much on-point. It was like being in the awkward presence of a couple arguing in hushed tones one moment and fake-smiling at you the next. We wouldn’t have wanted to be in the (probably pee-soaked) shoes of whoever ruffled those feathers when she got her hands on them off-stage.

Nevertheless, fans of the landmark album The Miseducation of Lauryn Hill, which has just celebrated its 21st anniversary, revelled in its live revival, plus a bonus cover of Franki Valli song Can’t Take My Eyes Off You, and a scat-filled finale of Doo Wop (That Thing), Killing Me Softly, Fu-Gee-La and Ready or Not which wrapped up another well-managed, sterling effort from Team Love and Crosstown Concerts.

Words by Amanda Nicholls; photography courtesy of The Downs Bristol