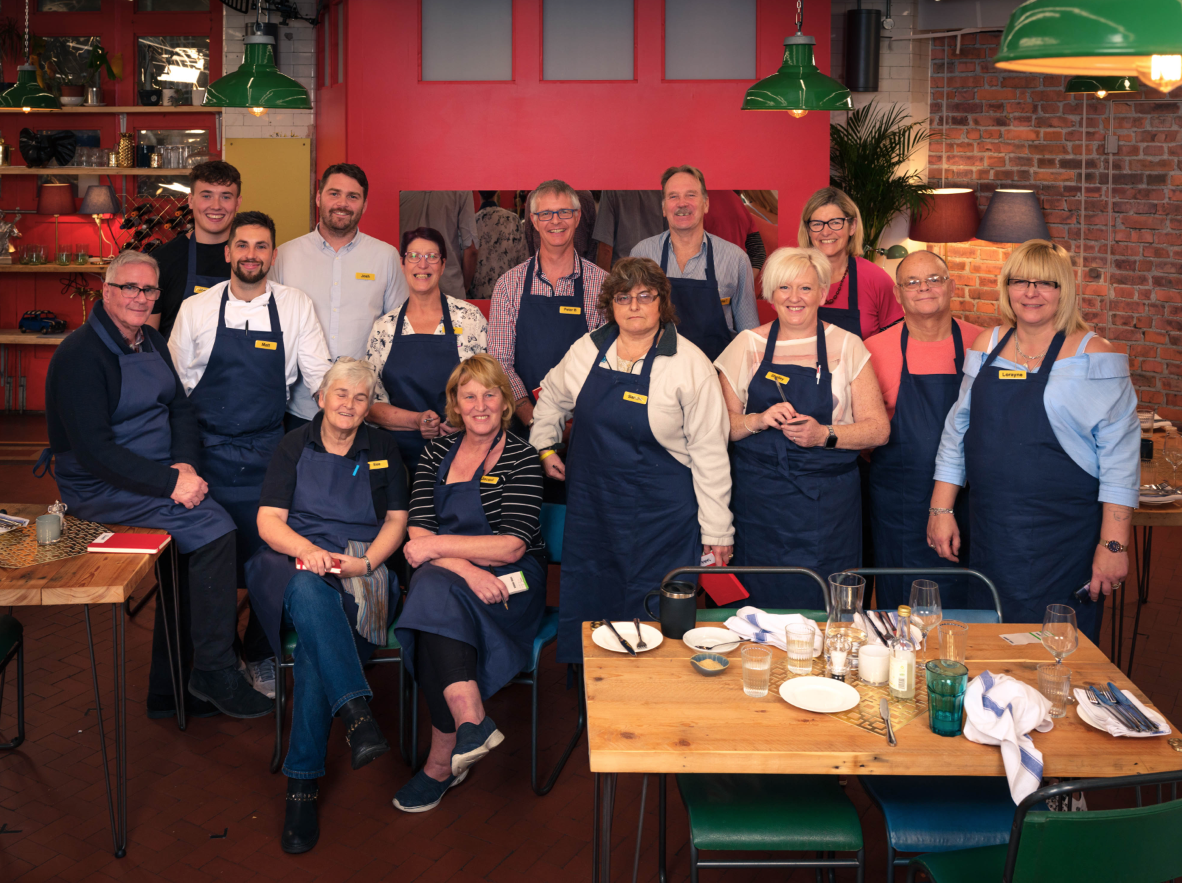 Review: The Restaurant That Makes Mistakes

“Fourteen people who have been diagnosed with dementia running a restaurant – what could possibly go wrong?” – Hugh Bonneville, supporter

You could be forgiven for expecting, perhaps, an element of the Fawlty Towers experience at The Restaurant That Makes Mistakes – the delightfully candidly named restaurant pop-up being run on Silver Street by Bristol Michelin-starred chef Josh Eggleton until 12 December. The whole thing is staffed by those living with dementia; a condition around which there are many misconceptions.

One of those, often held by employers, is that those with a diagnosis are no longer fit to hold down a job and continue work – and the main objective of this project is to publicly challenge this belief and raise awareness of the realities. It’s a proper restaurant – smart and stylishly decked out – as well as a social experiment, but it’s being filmed by Channel 4 and CPL Productions for a series airing in spring 2019.

Fairly confident of decent grub, with the Eggleton name involved, but unaware of how far along in their diagnoses the staff were, we had little idea of what to expect from our lunchtime visit. Far from the kitchen chaos we had envisioned as a possibility, it was a calm and orderly affair. Welcomed front-of-house by Jacqui from Whitchurch – who previously worked for a law firm and frequently travelled with her career until being let go with very little support once her condition was confirmed – we found our table and perused the menu. 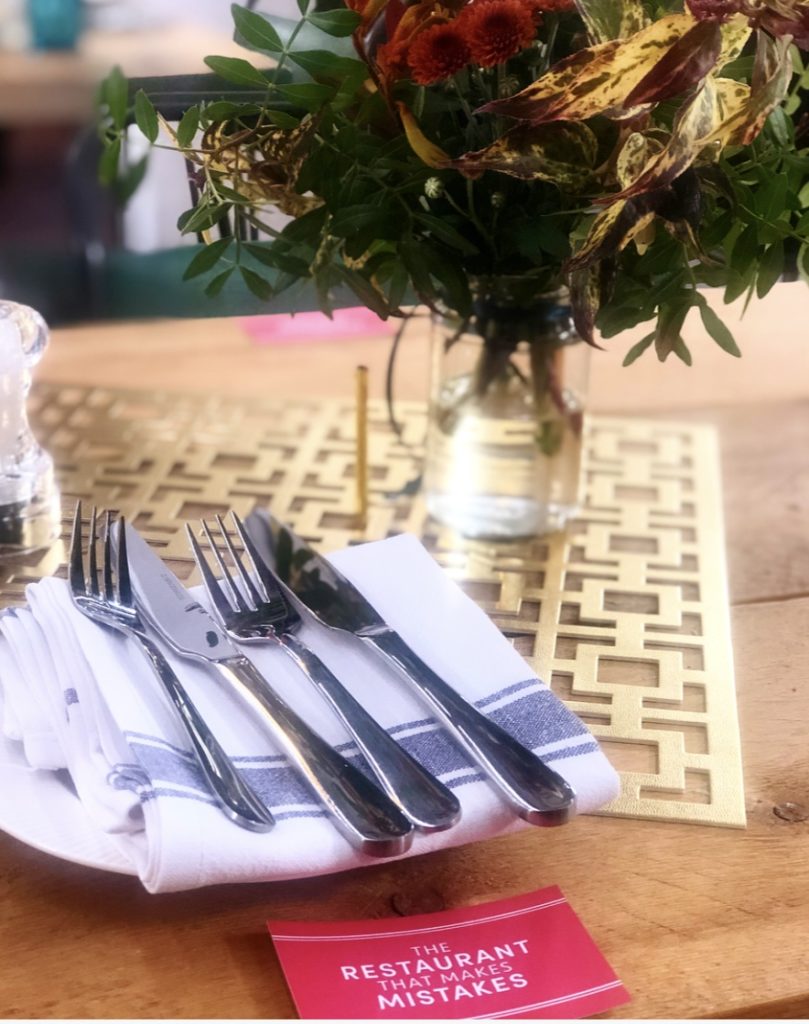 Despite being told the contributors taking part ranged in age from 23 upwards, when we sat down and took in our surrounds, we still didn’t quite cotton on that this meant the very young lad busying himself behind the pass was also, indeed, a participant. For a short while we were under the impression that Chef Eggleton had cheated a bit and drafted in some extra help, until remembering that this disease – widely considered the preserve of the elderly – is affecting more and more young people. Jordan Adams (lead image, back row, far left), in the TRMM kitchen, is believed to be the youngest person in Britain to be diagnosed with the dementia gene – news that tragically came just two years after his mother passed away due to the illness. Jordan runs a handmade ceramic tile company from home and works full-time – he had dreams of playing football professionally but was told he couldn’t because of his condition, so has settled for managing his local team.

Having tried out a surprisingly terrifying mobile ‘dementia simulator’ before our visit – asked to complete tasks while wearing dark tinted glasses that limit peripheral vision, headphones pumping out background noise, bumpy shoe insoles, thick gloves to curb dexterity – we had some idea of the physical symptoms and knew people could be affected by different combinations. While it wasn’t always immediately obvious which was manifest in who, we soon picked up that one contributor had more of an issue with balance, whereas another seemed less aware of the situation and what was required of them next – just requiring a gentle reminder here and there. 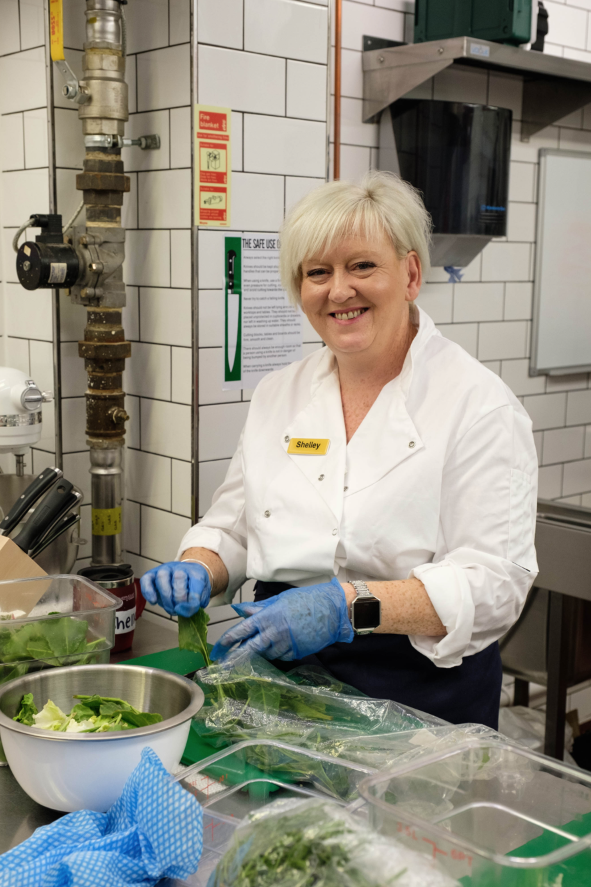 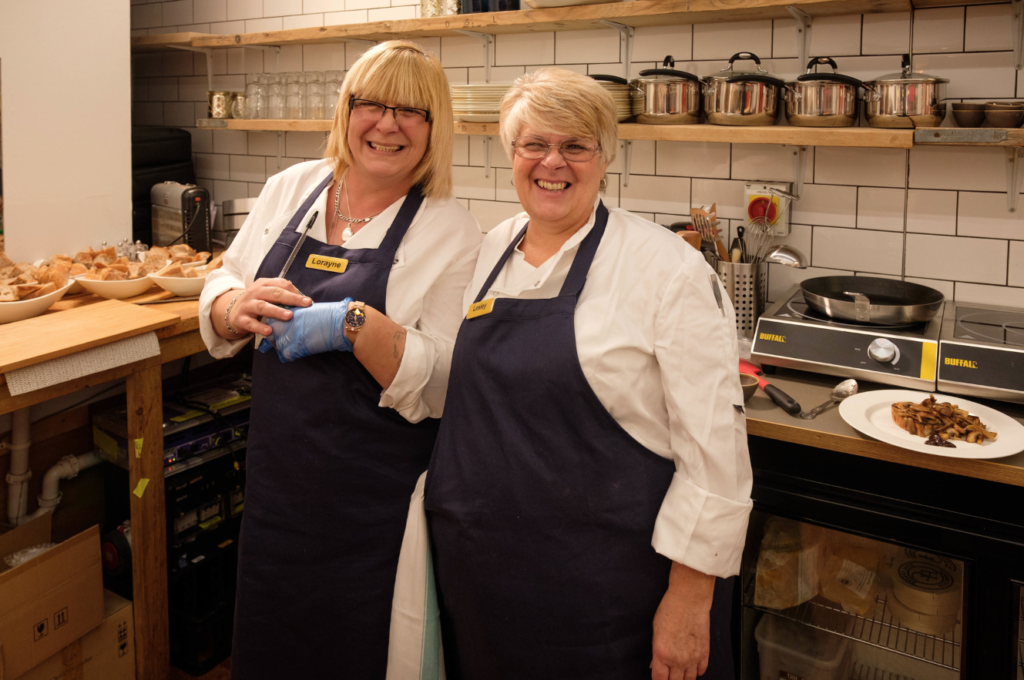 We kicked off with light, aromatic Domenico de Bertol prosecco (£5) with notes of stonefruit and apple. Truth be told, we were welling up slightly before even the starters arrived; discussing the close relationship between loss of purpose and subsequent depression in the healthiest of people, the integral part a job/career can play in someone’s sense of identity, and what a shock to the system it must be to suddenly lose your livelihood. 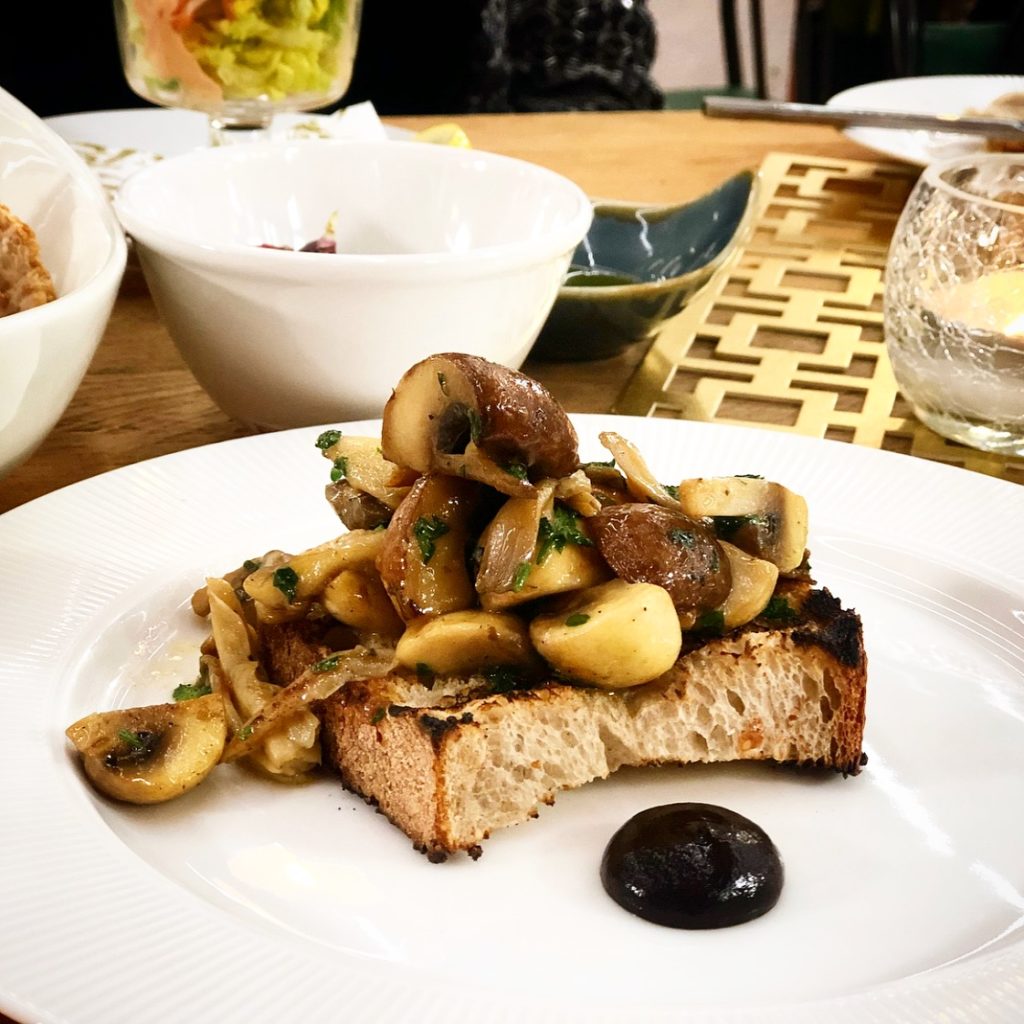 The wild mushroom and lovage on toast with pickled walnut and black garlic ketchup went a way towards cheering us up; as did TRMM’s tasty, refreshing take on the retro prawn cocktail – Atlantic shrimps with pickled red onion, turnip, crunchy carrot and silky Marie Rose (both dishes £6).

Pete, the most affable maître D’ we’ve met, sourced us some new cutlery (ours had been cleared with the starters) before telling us his story – a rather sad one involving some poor financial decisions made over his saw-milling business, due to the dementia. While heartbreaking, it was heartening to hear him speak so passionately about the restaurant and how pleased he was to be helping give voice to others with the condition. 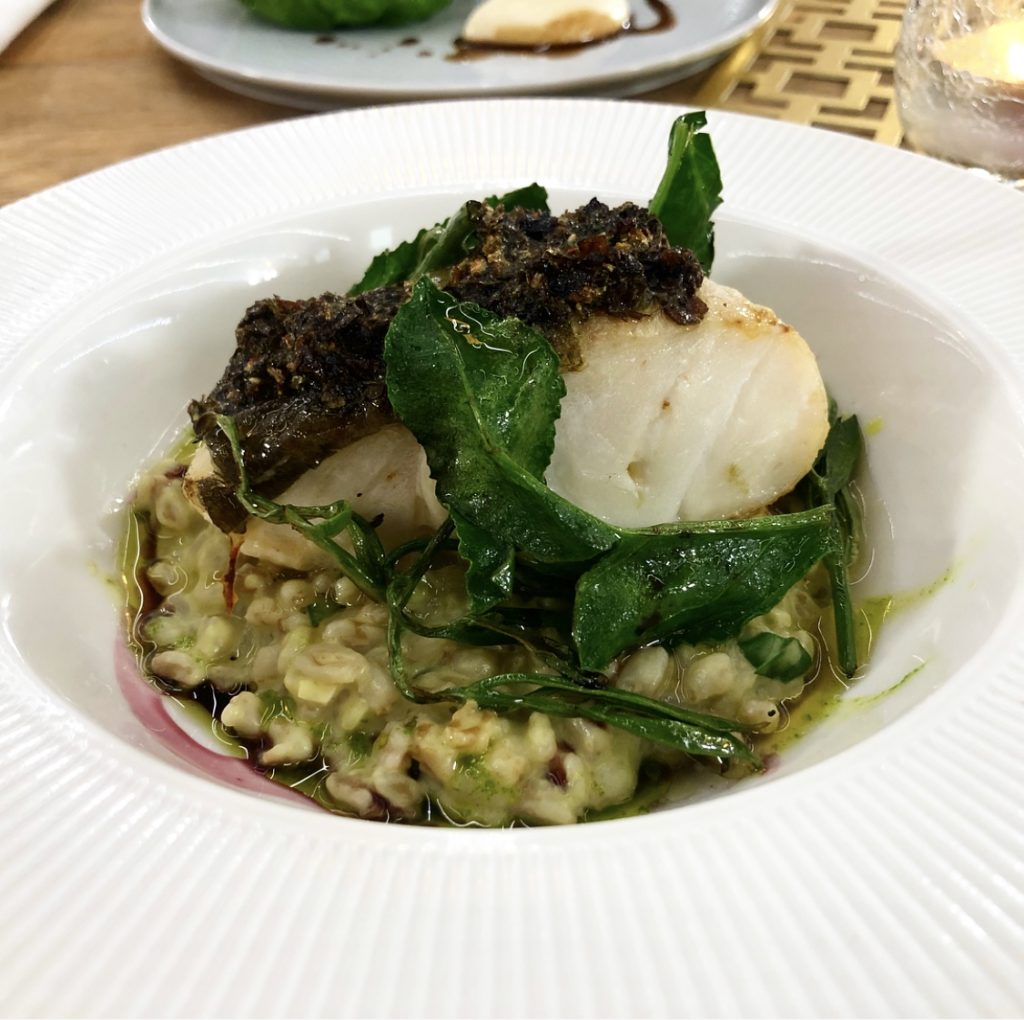 Baked cod with seaweed butter was hearty and buxom, reposing on a bed of parsley barley risotto and sea vegetables, while across the table a tender hunk of glazed ox cheek with celeriac purée, sprout tops and gravy fully deserved its “melt-in-the-mouth” description. We considered pushing our lunchtime limits if the spiced bread and butter pudding with toasted almond custard (£4) was still on the menu – seeing as we’d already started salivating at the sound of it – but, alas, it had sold out. 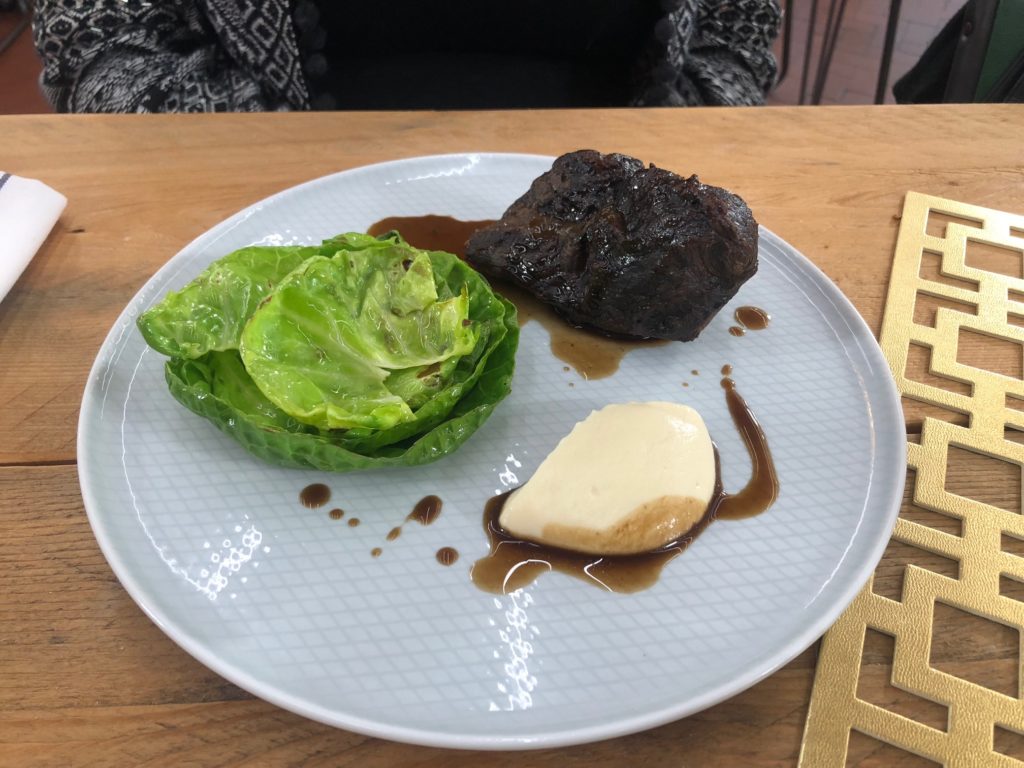 We left, eyes prickling again after chatting with a jolly Weston-Super-Mare gent formerly known as The Fastest Milkman in the West, and ex-carer Joy – who set up a group encouraging dementia sufferers to try adrenaline-fuelled activities like jet skiing and storm chasing, and was made an honorary doctor of Salford University in 2016 for working tirelessly to promote dementia awareness.

If anything, we felt slightly mis-sold – and amazed the only occurrence that could qualify as a mistake was a short delay with getting and splitting the bill. (And that was partly our fault – we’d distracted Pete for a good while on his way to fetching it, by asking him more about himself.) This was the only point that Chef Eggleton stepped in to assist; having taken a backseat throughout the rest of the service.

We fully recommend going along and meeting these warm, hospitable, capable people proving there’s plenty they can still do. The whole point of this project is to communicate that a dementia diagnosis needn’t and shouldn’t mean the end of a career and, with barely anything the pickiest customer could complain about, our experience of it did just that.