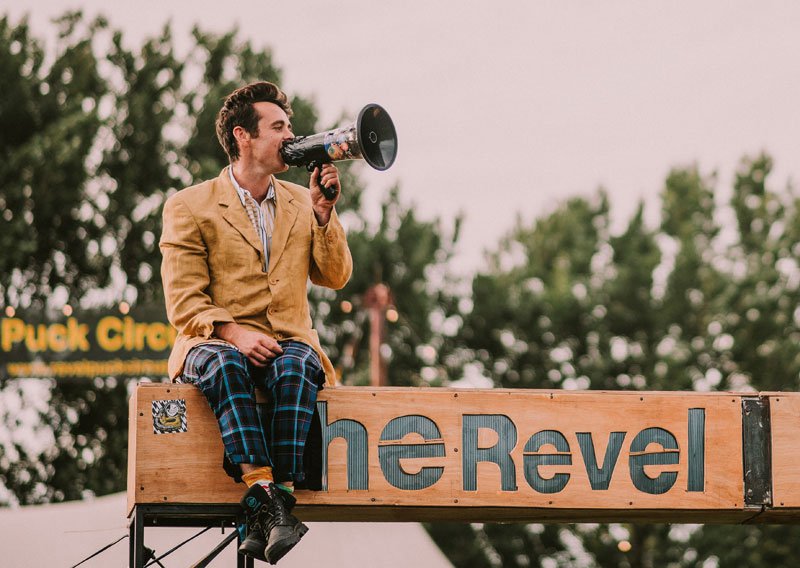 Three wooden doors and a large green ball: The Revel Puck Circus stage is simply set. But the more that you look – the more that seems to appear. High above the stage hangs a small chainsaw. Curious. And for the three wooden doors centre stage, there are three miniature counterparts tucked off to the side. Curiouser and curiouser.

With their latest show, The Scuffle Wing Spectacular, The Revel Pucks have created an anti-circus of sorts: gone are the critters, and gone are the bright, shiny colours that one might expect from a circus tent. This is a more laid back affair – and it’s all the better for it. From parents with their little ones, to couples on dates, to groups of after-work friends clutching candy floss and beer, the audience is a full and varied one: a testament to the welcoming environment that the Revel Puck Circus have created. As I’m shown to my seat, I’m told that this might all be a bit of a tight squeeze; it tends to be a matter of sardining as many audience members onto the tent’s long wooden benches as will fit, my usher grins. I’m happy to hear it: there’s something lovely about a shoulder-to-shoulder approach to theatre. It creates a temporary community of sorts; a sense that we’re all here to experience the show together.

A joyous musical-moment kicks off the Spectacular, with the company members leaping onto stage to introduce themselves through the medium of a Don’t Stop Believing lip-syncing sequence. From here, the Revel Pucks continue to deliver – and deliver, and deliver. We watch as the performers spin and jump and laugh their way through some deeply impressive acrobatic and comedic skits. The wow factor is certainly at work: with plenty a hand-slapped-to-mouth in delighted disbelief moment. We move from clowning sequences (hats off to Sam, The Revel’s Clown in Residence, and my personal Star of the Show) to extreme hula hooping and amped-up see sawing – and it’s all very slick indeed.

The Revel Pucks describe the The Wing Scuffle Spectacular as a “celebration of fear”: and that it certainly is. From heights, to (stuffed toy) lions – to the audience itself – each act sees a performer overcome something of which he or she is afraid. It’s wonderful – and really quite uplifting – to watch. The Revel Pucks teach us to jump even when we’re afraid to fall and to dance with the things that frighten us the most. As with the very best circus, I leave with the feeling that anything is possible. The laws of gravity are easier to break than we often imagine, it seems: “Yes, you can jump that high” and “absolutely; you can flip that many times before hitting the floor”. So ignore the rules and make friends with fear, The Revel Pucks tell us: because life really can be enormous fun.

The Wing Scuffle Spectacular is on from 7-24 April. Tickets can be purchased from The Revel Puck Circus website: revelpuckcircus.com