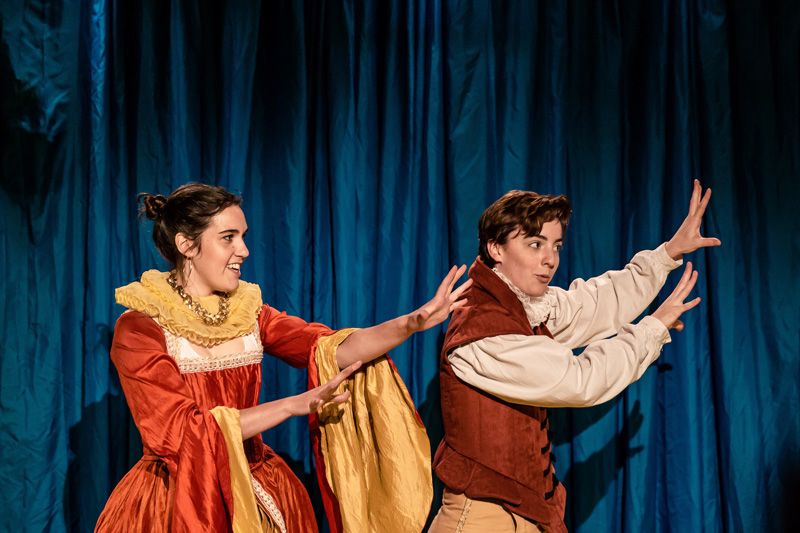 Over the course of 400 years, Nell and Oscar will meet again and again on the same Dorset beach, disrupting the concept of time – “time is elastic in the theatre” – and consistently break the fourth wall, all the while exploring their shifting gender roles and the impact it has on their friendship dynamic.

FullRogue’s deliberately chaotic debut show at The Weston Studio at Bristol Old Vic (following a sellout run at the Edinburgh Fringe) interrogates the cultural progress of the last four centuries in a flurry of costume changes, from corsets and crinoline, to bathing suits and bucket hats.

The show’s writer Marek Horn uses Nell (Alice Lamb) and Oscar’s (Annabel Baldwin) shared love of swimming, the freedom it represents for them, plus a smattering of intentionally ignorant literary references, to assess the change in gender politics, marriage and social opportunities over time.

Quite literally bouncing off the walls, fuelled by their gorging on anachronistic snacks of strawberry lances, juice cartons and Maltesers, and an energetic soundtrack featuring the likes of Justin Timberlake and Anastacia, there are seemingly no boundaries preventing Lamb and Baldwin from disrupting the show; tripping over lines, engaging the audience with props and improvised digressions (Lamb’s “fruit pastille burp” was a personal highlight).

The pace builds as each century comes and goes, reflecting the rate of cultural change and the role of the female no longer “on a permanent gap year,” waiting to be married off. We reach present day, overwhelmed and defeated by the “ever-shifting goalposts”, Oscar refuses to play ball any longer. The energy climaxes as the performance reaches peak level of absurdity (who knew snacks could potentially have the powers of time travel?).

A playful whirlwind packed into an hour and a bit, Wild Swimming is brimming with sarcastic remarks, salient observations and a contemporary message of embracing change.