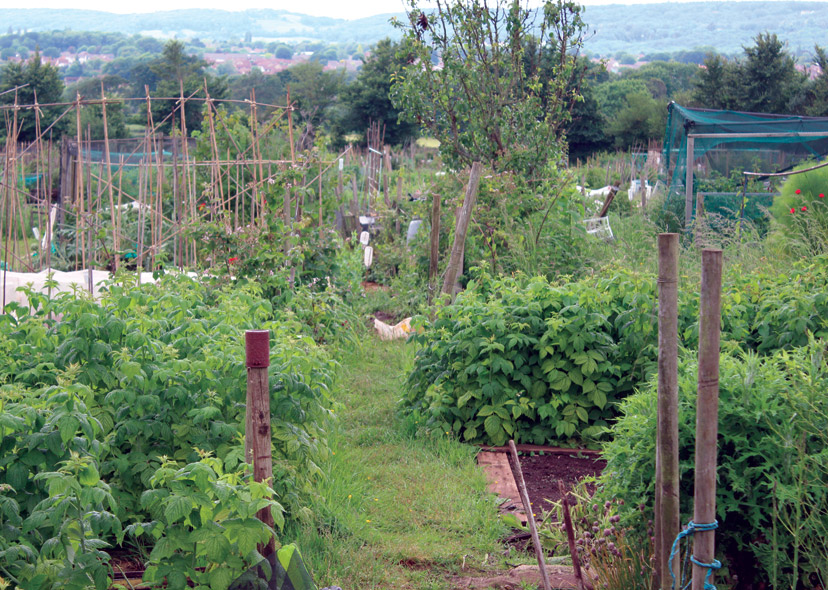 There’s something very British about an allotment site, and these hidden sanctuaries, featuring familiar and comforting sights, are increasing in number once again. Elly West looks back at their history and origin

Many of the gardens that I design include space to grow a few crops. Keeping this area separate appeals to most people’s sensibilities, including my own, and raised beds are ideal for this purpose. If space allows, it’s also nice to turn a growing zone into an extra ‘room’ in the garden, perhaps even with a low fence boundary or low clipped hedge to define it.

There’s nothing quite like the taste and satisfaction that comes from growing your own food. You know that it’s fresh and hasn’t been sprayed with any strange chemicals. It also makes sense financially – for the price of a few packets of seeds you can have a bountiful harvest that lasts for months.

Growing crops has far-reaching health benefits, and there is an increasing awareness of the role gardening plays in helping mental as well as physical health. But not everyone has room for crops in their garden, which is why more and more people are turning to allotments to provide that extra space and opportunity to grow their own food.

There’s something very British about an allotment site. I often travel by train and looking out of the window I see these hidden sanctuaries, tucked away yet a familiar and comforting sight with rickety sheds, cane wigwams covered in beans, higgledy-piggledy netting, strings of CDs flashing in the sun, and narrow pathways breaking the space into a grid-like semblance of order.

Allotments have been around for hundreds of years, and began when private landowners would allow workers small patches of land to grow food on, rather than increasing their salary. During the industrial revolution, allotments were increasingly necessary to the labouring poor for survival. Then, when the craze for gardening took off in the 19th century, the middle classes also took to allotmenteering, as a way to grow their own crops, and to have a place to take the family for a weekend outing or somewhere to relax away from the city. Some even had brick-built summerhouses and follies, and glasshouses and flowers were common on Victorian and Edwardian suburban allotment sites. In 1887 the Allotments Act was introduced, whereby it became compulsory for local authorities to provide allotments where there was a demand.

During the First and Second World Wars, allotment plots multiplied from around 450,000 across Britain pre-1914, to around 1.75 million in 1945, as every bit of disused land was given over to food production in the efforts to Dig for Victory. Once rationing was over in the 1950s, and food was readily available once more, many allotments were sold off to developers for building land to cope with the booming population, and allotment numbers cropped back down to around 500,000 in the 1960s and as low as 265,000 in 1997.

However, numbers are increasing again and there are currently around 330,000 allotment plots across the country. Waiting lists for some of these plots are long, and according to the National Allotment Society, we need another 90,000 plots to meet current demand as more and more people are turning away from mass-produced, chemical-laden foods and looking for organic sustainability.

Unfortunately, waiting lists in urban areas can be phenomenal and a quick look at the Bristol City Council website shows the same story. Although there are plenty of sites listed, with the council managing over 4,000 plots, very few appear to be currently vacant. However, it’s worth putting your name on a waiting list if you are interested, especially at the bigger sites, as turnover can be relatively high. If that fails, when six or more people group together and formally approach the local council it is still obliged to provide them with allotments under the Section 23 of the 1908 Smallholdings and Allotments Act.

When you’re choosing a site, consider location, site rules and water supply. Some plots will already have a shed, which can also be a huge bonus, as can an on-site shop. Good soil is obviously going to help you get started, and if you’re lucky your predecessor will have kept it well dug and nourished with compost. Lush swathes of stinging nettles or docks may look like a problem, but at least they indicate the ground is fertile.

Unless you’re lucky, any new plot is going to take at least some digging and clearing, and it may be worth hiring a rotavator for the task. However, always avoid rotavating weeds such as brambles and dock, as they can regrow from a small piece of root – so you might end up inadvertently propagating hundreds of new plants. And if your plot is very overgrown then Bristol City Council offers two years at half-rent.

Spend some time planning your space by sketching the area roughly to scale and thinking about where to position the beds, looking at the surroundings and where sun and shade fall. Include a compost heap and somewhere nice to sit back, relax and enjoy the view. With some patience and hard work, you might soon be joining the hundreds of thousands of people who love allotment gardening for the fresh air, home-grown produce, healthy lifestyle and community spirit of like-minded people.

For a list of allotments in and around Bristol, including details of how to apply for a plot, visit bristol.gov.uk/allotments. The National Allotment Society (nsalg.org.uk) is a good source of information if you’re thinking of applying for an allotment, and includes plenty of practical advice on how to run and manage your space. Social Farms and Gardens, based in Bedminster (farmgarden.org.uk) is another good source for information on all types of community gardening and nature-based activities.