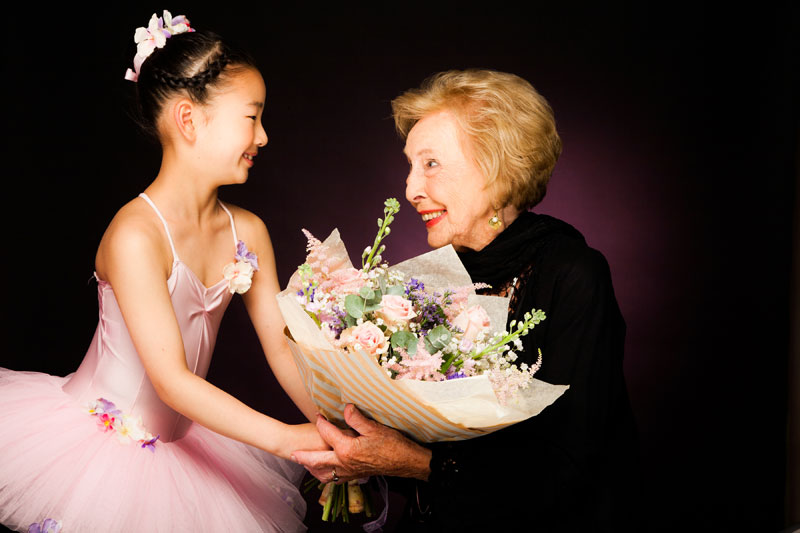 Royal Honour: in conversation with Principal of The Bristol School of Dancing, Angela Redgrave

Principal of The Bristol School of Dancing Angela Redgrave has recently received a British Empire Medal in The Queen’s Birthday Honours for her services to Dance. This month, we look back at Miss Redgrave’s 70-year career and celebrate her life’s work…

Matching Queen Elizabeth II with 70 remarkable years of public service is Bristol dance teacher Angela Redgrave, 104, who recently received the British Empire Medal for her services to Dance in the Queen’s Birthday Honours. Miss Redgrave has run The Bristol School of Dancing – the oldest established dance school in the city – since 1970 and continued to teach her students until March 2020. She now runs the school with her daughter, Felicity Redgrave.

This month, we had the pleasure of speaking to Miss Redgrave about her life’s work, learning not only of her incredible passion for dance but her extraordinary attitude towards life.

“All my life I never expected anything like this but I am so proud and so honoured to receive the British Empire Medal,” she says. “It’s lovely to have so many people – people I haven’t spoken to for years – ringing up and congratulating me.”

Born in London in 1917, Miss Redgrave began dancing at the age of 10. She enrolled in the Watford Academy of Dancing before transferring to what was then regarded as the leading performing arts school in London – run by Miss Euphen Maclaren, a member of the Pavlova Company. Here, Miss Redgrave mainly focused on classical ballet but also learned musical comedy and tap. She soon began to appear in highly acclaimed shows at some of London’s most illustrious venues, including the Royal Albert Hall, where she performed in Hiawatha. The musical, which is now too expensive to stage, most notably featured renowned conductor and composer Sir Malcolm Sargent, who is to this day regarded as Britain’s leading conductor of choral works.

“It was a wonderful time,” Miss Redgrave recalls. “We had some of the most prestigious singers appear in the production. If I close my eyes, I can still hear them singing.”

When the Second World War broke out in 1939, Miss Redgrave continued to work and dance at venues in the capital, often having to take shelter at the nearest underground station during air raids. After the war, she relocated to Somerset where she restarted her teacher training at The Maddox School in Bristol – the only Royal Academy of Dance (RAD) school in the area. The RAD is a UK-based examination board specialising in dance education and training, with an emphasis on classical ballet. The RAD was created with the aim of improving the standard of ballet teaching in the UK and a new teaching method and dance technique was devised. The RAD is one of the largest and most well-respected dance organisations in the world with over 14,000 members in 79 countries.

After finishing at The Maddox School, Miss Redgrave ventured out on her own, opening a successful school in Nailsea, where she taught the RAD syllabus. It was while she was in Nailsea that she heard that the influential Bristol School of Dancing was up for sale. “Bristol School of Dancing came about by sheer chance,” Miss Redgrave explains. “I wanted a singing teacher for my school in Nailsea so I applied to a lady I knew. Talking to her, I discovered The Bristol School of Dancing was shutting down. Immediately, I made arrangements with Lynn Britt [who was running the school at the time] and I took over. But, of course, we had no premises as they had already been sold. I remember going up and down Whiteladies Road from one hall to another, sometimes with a queue of children after me. Eventually my son found premises on Lansdown Road, which is the area we naturally had to be in because that was where the school started.”

The Bristol School of Dancing was founded in 1947 by Mary Hoskyn and Muriel Carpenter and originally occupied numbers 55-57 Pembroke Road. It has been teaching dance to the students of Bristol for over 70 years. From the beginning, classical ballet was a strong feature of the school with many senior students winning the annual Espinosa Scholarship to The Royal Ballet School. What’s more, The Western Theatre Ballet, now The Scottish Ballet, was founded in Bristol with students from the The Bristol School of Dancing.

When Miss Redgrave took over 52 years ago, unbeknownst to her at the time, she had moved the school to the former premises of The West of England Academy – a dance school founded by the twentieth century’s first British ballerina, Bristol-born Miss Phyllis Bedells. Miss Bedells, together with a small group of eminent dance professionals, went on to establish the Association of Operatic Dancing in Great Britain. In 1935, it became The Royal Academy of Dancing, now known as the RAD.

The Lansdown Road studio was built in 1893 by Theodora Johnson and stands in the garden of 20 Vyvyan Terrace, where she once lived. Miss Johnson taught the Ling method of physical training that was started in Sweden, which explains why on either side of the main entrance the words “Swedish Gymnasium” are carved.

Today, The Bristol School of Dancing carries on the strong tradition of classical ballet with fully-qualified teachers registered with both The Royal Academy of Dance and The Imperial Society of Teachers of Dancing. The studio still houses the original barres that Miss Bedells herself had fitted as well as a music stand. The standard of training at the school is such that many students are avidly considered for places at major academies like Bird College, Performers College, Laine, Urdang, Elmhurst Ballet School, Tring Park and The Royal Ballet School.

“The school has taught a lot of wonderful students and I hope it will go on doing so,” says Miss Redgrave. Most notably, one former student now performs regularly on Broadway and has become a major choreographer in America. Other former pupils are due to appear in major roles in both Mamma Mia and Legally Blonde in London’s West End.

After working in Bristol for over half a century, Miss Redgrave describes it as a “wonderful city”. “There are so many chances and opportunities for the girls and boys. It really is a super city,” she continues.

The school’s ethos is “to preserve and nourish individuality and spirit that will last a lifetime” and Miss Redgrave is clearly committed to helping and including children of all backgrounds and abilities. Our conversation ends on an inspirational note: “We need to encourage more children to dance. It does give confidence and it does give happiness. I’ve had parents say to me – especially the father of one child who had a disability – you have made her life. What more could you ask for.?”