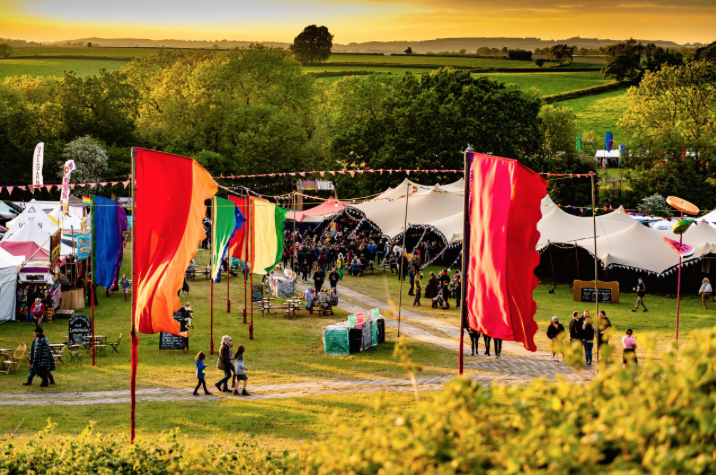 Signalling the start of the summer, Shindig Festival (26-29 May 2022) will be the finest yet. It’s taking place in a NEW location: Dillington Estate, Somerset. The 16th Century house and hotel not only provides the backdrop but also some high-end accommodation. And the party takes place in the beautiful, tree-studded parkland.

The seventh edition of Shindig combines old-skool royalty, festival residents with many rising stars to ensure there’s something for everyone. De La Soul, New York’s Grammy winning hip-hop trio will be headlining and performing hits from their critically-acclaimed back catalogue for a feel good, hands-in-the-air singalong.

The prophet of acid jazz, Roy Ayers, will be bathing Shindig in his mellow glow.  A musician, decades ahead of his time, he pioneered the feel-good jazz funk movement of the 70’s with songs such as Everyone Loves the Sunshine, Searching and You Send Me.

Across the seven stages, a whole host of new acts will be coming to Shindig this year. Shunaji, whose sound is an eclectic and genre-bending fusion of hip hop, R&B and jazz with psychedelic synths.  The evergreen sound of DJ and producer Nightmares on Wax defies categorisation but is one that has resonated with many people and will get the crowd going with his exclusive late night extended DJ set.

Taking you on a journey into the beating heart of the African diaspora, Ibibio Sound Machine combine elements of West African highlife, disco, post-punk & psychedelic electro soul and pure joy.  Keeping in a groove and blending boom-bap with jazz funk is the jazztronica duo and MOBO-nominated Blue Lab Beats.

Odyssey….Yes, that Odyssey! Shindig will be ‘Going Back To My Roots’ in 2022! Best known for a series of chart-topping hits in the 70’s and 80’s, the band will be performing their inimitable funk, soul and disco classics live.  If you’ve never seen the House Gospel Choir, you’re in for a treat. It’s an electrifying House-meets-Gospel experience that never fails to get audiences clapping, dancing and singing along.

Talking of house, François K, considered by most as one of the forefathers of the New York house scene, is headlining the new house music venue Shimmy. He’s held residencies at Paradise Garage and Studio 54 to name but a few; this is the mind, body & soul of house music.

The Rebel Dread/BBC 6Music’s Don Letts and The Specials, Terry Hall, will be going back to back in this festival exclusive, picking the crates for their top tracks. A sure-fire Shindig Moment to catch! For those who worship at the dearly beloved Purple One’s altar, join Rob da Bank and Tayo for their stand out Purple Rave – a celebration of the life and music of Prince.

Not forgetting all the usual Shindig favourites who will be joining for the weekend. With notable sets from: Dutty Moonshine Big Band, A.Skillz, Shadowchild & Altern 8, Too Many Ts, Gardna, Eva Lazarus and 2 Bad Mice as well as founder of Soul II Soul, Jazzie B, will be spinning his own special selection of doo-wop soul and old school funk to bring the bump’n grind to the dance floor.

It wouldn’t be Shindig without a stellar drum n bass line up. With debut performances from Dillinja, DJ Flight, who’s widely regarded as a pioneer of dance music, as well as DJ Rap – the undisputed queen of the turntables and voted the number one female DJ in the world!  You’ll be kept dancing til dawn.

Goldie will be offering up his singular blend of jungle and drum & bass, creating a soundscape where melodies and vocals carry as much weight as growling basslines. He’s a stalwart of the scene and he’ll feel right at home with the Shindig family.

There are some outstanding up-and-comers on the bill: Zoro & Budden – have been making seismic waves in the D&B scene. And make sure you catch dance-floor damagers The Kitten Club, who have been storming across the South West with their high-octane sets.

New for this year is the Gritchie Bar. Yes, of Guy Ritchie fame. His friends had been in previous years and now he’s bringing his brand-new bar and his award-winning beer – making its festival debut at Shindig. The barley, grown and brewed, within 40 miles of the Dillington Estate, is going to be the name on everyone’s lips.

“I’m so excited about 2022. It’s the most diverse lineup we’ve ever seen. From gospel choirs to Shindig regulars and everything in between: pioneers, legends and luminaries, this is a once in a lifetime opportunity to dance the weekend away in beautiful new surroundings”.

This year’s fancy dress theme is Mardi Gras. Presenting Shindiggers with the perfect peacocking and parading opportunity. Don feathers, beads, gather your festival crew and bring the best shimmys and shakedowns you’ve got.

Expect some attention stealing, mind-bending art installations from the most visionary and trailblazing creatives of today. From giant welded artwork, interactive diversions, fire-breathing sculptures and burlesque performances, the Shindig spectacle is dialling up to ten. The festival wouldn’t be the same without a heart-in-your-mouth performance from high-wire walker Chris Bullzini. Or Pirates of the Carabina with their raucous, ingenious and insane talent.

For those that like to mix wellness with wildness, Shanti Shala is the perfect place to unwind, recharge and reconnect. You will find a variety of therapists offering treatments to relax and restore your body and mind. From yoga, massage, pilates, tai chi and ecstatic dance – there is a huge range to choose from.  Bigger than ever before, the Craft Area will offer workshops on everything from felt making to spoon whittling, woodworking and jewellery making for all the family.

The Kids Kingdom has expanded. This year it will house a skate ramp, crazy golf course, kids cinema and plenty of inflatable fun. You can book clay-modelling workshops with Aardman, drumming sessions with Jamba de Samba and make clothes from scrap materials. Not forgetting the outrageously and abnormally energetic Flying Seagull Project who are back by popular demand!

Shindig Festival has evolved over the years from being a party for the network of friends of the Ghetto Funk record label to a festival with a reputation for an incredible line up and a super-friendly vibe.  It’s a glorious mash up of a gig, a free party, a circus show, a series of curious craft workshops, a wellbeing retreat and a kid’s party.  Voted ‘Best For Family Rave’, it has been blazing a trail since 2014 and attracting an ever more diverse crowd.

There are no main stages, just a beautiful arrangement of stretch marquees. From watching circus to hearing spoken word or learning a new skill, there’s something for everyone. Bringing a healthy dose of foot-stomping funk and a packed programme of entertainment for all ages, Shindig Festival offers relaxation and revelry in equal measures.

Visit the Shindig Festival website below for more information: shindigfestival.co.uk